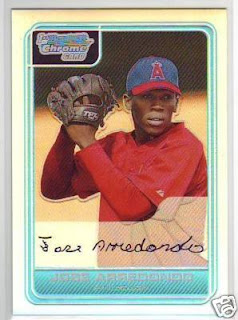 The Angels sure don't seem to be playing like a team that just clinched the division on the earliest date in their franchise history (and FOURTH earliest in MLB history, my blog the other day was incorrect because I didn't know what date it was. Today the Angels go into the bottom of the 9th tied with Seattle, Sean Rodriguez hits a one-out triple, and Figgy drives him home one batter later.

This just shows how good the Angels bullpen is this season: Reliever Jose Arredondo was credited with his NINTH victory this season, leading the majors. That's crazy. I noticed last week that he had 7 wins, which in of itself was awesome, but to get two more in a week, that's sheer madness. ESPECIALLY when you consider that Arredondo usually comes into the game with the Angels behind and runners on base. He now has 54 innings in 47 games, he's given up only 36 hits, 12 runs, 8 of them earned. His strikeout to walk ratio is 2.67 to 1!

Oh and he's a rookie.

His RC is a 2006 Bowman Chrome, which you can get for a couple bucks. I think I might have to do that.
Posted by William Noetling at 4:04 PM