The afterglow of making the post-season for the first time in club history did not last long for the 1980 Angels. In the off-season free-agent starter Nolan Ryan was allowed to leave and sign with the Houston Astros as the then-highest paid player in MLB history (four years for 4.4 million dollars!). Angel General Manager Buzzie Bavasi notoriously claimed that for what Ryan did in 1979 (16-14) he could get TWO pitchers who could go 8-7. Boy was he wrong. The 1980 Angels ended up in 6th place in the AL West, out of the pennant race by mid-season.

The 1981 version of the Angels wasn’t much better, coming in 5th in the AL West. However, several key moves would push the Angels towards another division win the next season. 81 was the first year for former MVP Fred Lynn with the Halos, and an up-and-coming rookie named Mike Witt made his debut with the team on April 11. Manager Jim Fregosi was let go during the season to be replaced by Gene Mauch.

Several key off-season transactions would push the Angels towards respectability again. Starting catcher Ed Ott was granted free agency (thought he would be later re-signed) and almost immediately replaced by Bob Boone whom they bought from Philadelphia. The biggest acquisition was that of Mr. October, Reggie Jackson from the Yankees in January, less than a week later solid fielder Dan Ford was traded to the Orioles for Doug DeCinces and Jeff Schneider. Later in the season the Angels traded for Tommy John and acquired Luis Tiant.

The ’82 Angels won a club-record 93 games. Infield anchors Bob Grich and Rod Carew were joined by DeCinces at third and Tim Foli at short. Former catcher Brian Downing had moved to the outfield and played alongside Lynn and Reggie. Don Baylor remained the team’s DH. Jackson didn’t disappoint that season, knocking in 39 dingers tying for the league lead and would join Grich and Lynn as All-Star starters, with Carew as a reserve. Their style of play was similar to the “small-ball” style that Mike Sciosia employs

The Milwaukee Brewers held the best record in baseball going into the playoffs, winning 95 and losing 67. The team featured a couple of HOFers in Robin Yount and Paul Molitor and also had the power-hitting Gorman Thomas and the sturdy Cecil Cooper. Four of their starters won 11 or more games, including Pete Vuckovich who went 18-6.

The ALCS started promisingly enough for the Halos. Their ace Tommy John started Game One, giving up only 3 earned runs in a complete game. Downing scored in the 1st on a sac fly from Baylor making it 1-0. The Brewers roared back in the 2nd and 3rd taking a 3-1 lead, but the Angels would respond in the bottom of the inning with 4 big runs, Downing walked to lead off the inning, DeCinces and Grich each followed with an RBI single, then Baylor tripled to center scoring 2 more. The Halos chased starter Mike Caldwell in the 4th when he gave up an inning opening single to Bob Boone. They would score 3 more to win the game 8-3. Center Fielder Fred Lynn went 3-4 with 2 singles and a solo HR. 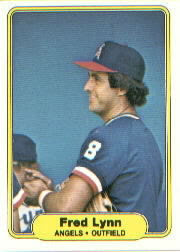 Game Two was more of the same from the scarlet clad boys from Anaheim. The Angel starter Bruce Kison pitched another gem of a complete game, giving up only 5 hits and 2 runs. Angel batters made do with only 6 hits total, 4 of them singles. Reggie blasted a solo HR in the 3rd that ended up being the winning run, and they would go on to win 4-2. Lynn had another stellar game going 2-4 and scoring a run.

The series shifted to Milwaukee for the remainder of the playoffs before Game Three. Turns out that all the Brewers needed was home field advantage because they swept the next three games. Geoff Zahn started for the Halos, only lasting until the 3rd, giving up 3 runs and a walk. The difference in the game was a 2-run homer by Molitor in the 7th off of reliever Mike Witt, and the Angels went down 5-3. Venerable Don Sutton picked up the win throwing 7 & 2/3rds giving up 3 runs and striking out 9. Fred Lynn continued his marvelous series (he would end up the series MVP with a 2-3 performance, including a walk, a run and an RBI.

Tommy John again started Game Four, but spotted the Brew-crew a 6 run lead by the fourth. It ended up being all that they would need in an error filled slugfest. The Angels came close in the top of the 8th with Baylor hitting a Grand Slam to make it only a 2 run Brewer lead, but would eventually come up short losing 9-5. Lynn’s’ line: 1-3 with a double, a walk, a run scored, an RBI and a strikeout.

The closest that the Angels got to the big dance was when they took a 3-1 lead in the top of the 4th. They had manufactured single runs in the 1st, 3rd and 4th with 2 RBIs from Lynn and one from Boone. Brewer pitching then shut them down for the remainder of the game. After the 5th the Halos only managed two singles, and no one got past first. The Brewers cut the lead to 3-2 in the bottom of the 4th on a solo HR by Ben Oglive; they took the lead for good in the 7th on a 2 RBI single by Cecil Cooper. Lynn’s’ Line: 3-4 with 2 RBI. 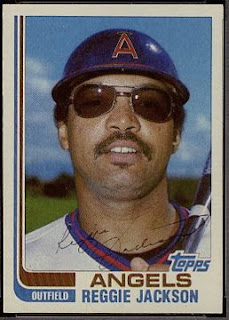 Unfortunately for California the Brewers simply needed their raucous home crowd to get them going, and they simply outplayed the Halos. Manager Gene Mauch did his best to keep up, but ultimately small-ball couldn’t out-maneuver the big sticks of the Brewers. They would go on to lose the World Series to the Cardinals in 7.

The Angels would come close to the post-seasons in two out of the next three seasons, coming in second in the AL West twice, in 1984 going a perfect 500 at 81-81 and in 1985 going 90-72 both times losing out the West to the Kansas City Royals. The ’85 season was heartbreaking because they led the West for much of the season, and as late as October 1, ultimately falling behind by one game.

Next time: Tragedy and One Strike Away from the Series. Or…The OTHER major event that happened in the post-season in 1986.


Posted by William Noetling at 3:44 PM