I was perusing my local Target looking at the cards section when I spied something I had never seen, the 2004 Upper Deck History of the United States card set on sale for a relatively low $9.99, so I bought it. Now, I was out of the card collecting game in 2004, working on my undergrad degree at UCLA, so I had no idea this set even existed, and I'm kind of glad I didn't find it until now. When they designed that set they thought it might be nicer to not number it #1-300, rather each individual sub-set is separately numbered. To make matters worse there are several insert sets, including the extremely hard to find "coin" cards. None of these chase cards are included in the factory set.

Once you unwrap the plastic you find that the set isn't collated, so you have a bit of fun ahead of you. I found a checklist here and I went to work.

The photos and card design are really well done, and a cursory glance at the backs make them appear to be well written. I'll be going through the set in detail later. 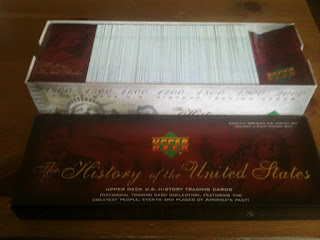 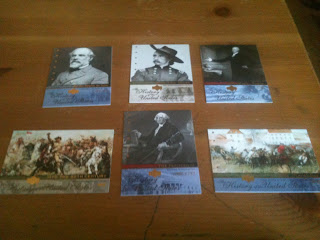 Just got this missive via the Upper Deck folks, all I can say is...$50 per card? Ridonkulous. Definitely NOT a budget collector item. Upper Deck Announces the Most Premium Marvel Trading Card Product Ever Produced! Trading card giant announced “Marvel Premier” is coming at Comic-Con with a suggested retail price of $200 per pack! Carlsbad, CA (July 13, 2012) – For years the Upper Deck Entertainment team has produced some of the most compelling and collectible Marvel trading cards in the industry. And now Upper Deck has decided to raise the bar in terms of what collectors can expect in a pack of Marvel trading cards announcing today at Comic-Con the company will release Marvel Premier on October 2, 2012. It will be the most premium comic trading card release of all-time with packs carrying a $200 suggested retail price tag. So what comes in a $200 pack of Marvel trading cards? There are just four cards in each pack, but they all pack a punch! First fans will receive a premium base card on thick card stock from the 50-card base set numbered to just 99 copies. Next they will receive a one-of-one sketch card from top Marvel artists. The third card is an industry first where collectors will find a dual, triple or quadruple hinged sketch card. These are really remarkable trading cards and we will be releasing images of them soon. The fourth card will be either a “Classic Corners” card, a Shadowbox card or an “Emotion” booklet card by Jason Adams and NAR! “For years we’ve seen die-hard Marvel fans pay big bucks for some of the premium inserts in our Marvel trading card lines,” said Jason Brenner, Upper Deck’s Marvel brand manager. “This is our first opportunity to provide them with a set of Marvel cards that are all high-end insert quality. This is certainly not a product for everyone which is why we are not making very much of it, but the fans it is targeted for are going to love it!” Upper Deck’s 2012 Marvel Premier really is about the artists and the company has employed some of the best for this project including Cruddie Torrain, Jason Adams and Nar! Additionally there are new innovations besides the hinged sketch cards with Upper Deck’s Shadowbox cards making their debut in the entertainment realm. The “Classic Corners” subset is another one that comic fans will be sure to love that pays homage to some of the greatest Marvel comic corners of all-time in a premium patch card. So get ready Marvel fans. Upper Deck is about to change Marvel trading cards as you know them for the better! About Upper Deck Upper Deck is the leading sports and entertainment trading card and collectibles company. For more information on Upper Deck and its products please visit www.upperdeck.com. About Marvel Entertainment, LLC Marvel Entertainment, LLC, a wholly-owned subsidiary of The Walt Disney Company, is one of the world's most prominent character-based entertainment companies, built on a proven library of over 8,000 characters featured in a variety of media over seventy years. Marvel utilizes its character franchises in entertainment, licensing and publishing. For more information visit www.marvel.com. ### Chris Carlin Sports Marketing & Social Media Manager The Upper Deck Company 2251 Rutherford Road | Carlsbad, CA 92008 T: 760.929.3159 (NEW) | F: 760.929.3150 Follow Upper Deck on: Web | Facebook | Twitter | Blog | YouTube
Posted by William Noetling at 12:03 PM 2 comments: