OK this is driving me crazy, my Google-Fu is failing me. I SWEAR I've seen a pic of an upcoming McFarlane Toys Rick and Morty construction set that comes with Beth, I want to say it's the Living Room of the Smith House, but I can't find it now. I mean, I have all of the R&M sets so far (except for the 3 mini sets with Krombopulous Michael, Ants-in-my-eyes Johnson and Scary Terry, only the latter of which I would remotely consider important to have). I MUST have a Beth figure to complete my Smith family of crappy too-large-Lego Figures. Dammit. Plus I have to figure out how to make the 3 previously released house sets go together. Spoiler Alert - they DO NOT fit together at all.

That was the Facebook post that I was going to post, but then decided to turn it into a blog post instead, because I don't write enough on my blog. Then I took pictures. I'm going somewhere with this. But first a short history of Lego and Lego Competitors.

So there's this awesome toy company called "Lego". They've been making toys since, like err...before World War II. They started off making simple wooden toys, like a wooden duck with wheels, but somewhere in the 50's they came up with their most brilliant concept ever, the interlocking brick. They weren't the first brick toy out there, wooden blocks have been toys since, well, trees were invented I guess. No, what they did was make them out of plastic and add some tubes underneath so that your two bricks could fit together and not come apart. They patented that concept and made a metric shit-ton of bricks. Seriously there's like at least 60 Lego bricks for every human on the planet.

In the late 70's (I want to say it was 1978 exactly) Lego introduced the modern "mini-figure" a squat one and one-half inch tall action figure to go with your lego bricks. Since then almost every awesome Lego set created has revolved around the mini-figure. Up until the late 90's Lego sets where themed very generically, usually around a real-world concept like "Town" or "Space". Actually, yeah that was it originally. Later sub-themes emerged like "Police" or "Adventurers" or "Space Police" and "Blacktron" in the science-fiction based lines. And these were fine.

And then Lego licensed Star Wars and the world has never been the same. NOW you could get official Lego versions of your favorite Star Wars characters, even a miniature R2-D2 that fit right in with your Luke, Leia, Obi-Wan and Darth Vader. Lego licensed Harry Potter as well and since then they've had such diverse themes as Teenage Mutant Ninja Turtles, Speed Racer, Pirates of the Caribbean, Disney and so many more. So many licenses. Not every brand goes with Lego though. Plenty of brands have Lego-type building sets, but they aren't Lego. Lego has had competitors since their earliest days. As I said the concept of building blocks isn't new, neither is what Lego did with their gripping techniques. So there's been hundreds of companies producing building bricks that are more or less "compatible" with Lego. Toy lines like Hasbro's GI Joe and Transformers had their own brick lines a few years ago with Hasbro's own in-house Kre-O line. The bricks themselves came from a South Korean toy comapany's Lego clones, and the mini-figures were designed to be reminiscent of Lego mini-figures but with added articulation. Kre-O also had the Star Trek master-license for a while and produced some nice mini-figure sized ships, along with smaller non-figure scale ships. We'll come back to Star Trek.

Lego's biggest competitor today is Mattel's Mega Bloks. Or Mega-Blocks. Nope, wait that's not right. They're definitely Mega-BLOKS. Originally an independent Canadian company, they were just another knock-off Lego brand with inferior plastic and uninteresting sets, until they too started licensing in the late 90's. Going after more kiddie-themed lines initially, soon Mega was able to leverage stronger licenses like Lord of the Rings, NASCAR and Power Rangers. With these licenses Mega started doing their own mini-figures which as one would expect, were initially very much like Lego's mini-figures. Over the years though Mega started introducing better articulation and sculpts to their mini-figures, culminating in their amazingly articulated Halo themed figures. Since then they've even published a line of carded single figures in a "Heros" line which includes Star Trek, Masters of the Universe, Alien and Futurama of all things. Yes Mega now holds the Star Trek license. But they're not doing a lot with it.

I'm not even going into the various brick Sports figures, but to say the least, there are two different scales amongst the 4 major sports. Oh and Playmobil licensed the NHL.

One of my favorite non-Lego brick lines was Character Building's Doctor Who range of toys, which saw a plethora of characters from throughout the entire 50+ year history of the franchise be released, alongside a few iconic building sets, which included two different Tardis interiors, a Dalek flying saucer and more than one version of the iconic Tardis box. They additionally had two versions of an 11 or 12 Doctor figure set and a blind-bagged version of the same. I know that doesn't make much sense. Doesn't matter. They stopped doing the line JUST after the 12th Doctor began, so we did get a Peter Capaldi figure in the line (and a War Doctor for that matter), we won't ever get any companions after Clara. Because now Lego more or less has the license and they're not doing anything with it. At all. Seriously. It sucks. I have over 100 Character building Doctor Who figures, and like 6 official Lego Doctor Who figures. And the Lego Daleks suck.

McFarlane Toys, the company founded by former Marvel Wunderkind, Image Founder Todd McFarlane decided to jump into the building block foray with their The Walking Dead master license. Their TWD figures are more like seriously smaller versions of their well sculpted action figures. Not at all like Lego. Finished sets don't look much like Lego sets either. They're weird.

I first encountered McFarlanes building line with Kaylee's Five Nights at Freddies toys, which are more like Lego, but different. Way different. Figures are more built up than Lego, and they don't hold together very well. They use a mix of ABS and PVC plastics on different parts and they just feel weird. They fall apart very easily as well. The brick built set pieces are problematic to say the least. First of all and this will be pertinent in a little bit, the sets don't fit together in any modular way, despite depicting different parts of the same buildings. Secondly, again pieces are a mixture of plastics and don't fit together well in places. Thirdly, the ABS they use isn't anywhere near as good as the ABS that Lego uses. Lego is famous for their plastic quality (though less so in recent years due to their globalizing their manufacturing, rather than keeping it all in Denmark).

Currently there are seven available McFarlane Rick and Morty building sets. They are:

1. The Spaceship & Garage (with Rick and Morty figures)
2. The Garage Rack (with Mr. Meeseeks and Jerry figures)
3. The Hallway (with Evil Rick and Evil Morty figures)
4. Ants in my Eyes Johnson
5. Scary Terry
6. Krombopulous Michael
7. Summer's Bedroom (with Summer and Snowball/Snuffles figures)

Sets 4-6 are small builds with a figure and since they don't fit the overall theme of the house, I don't have them (yet). 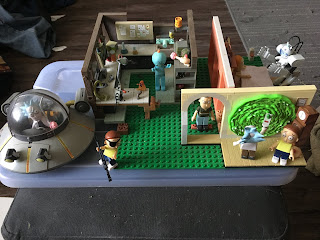 Here's the overall layout as I have it arranged currently.  There's really no official way these go together. 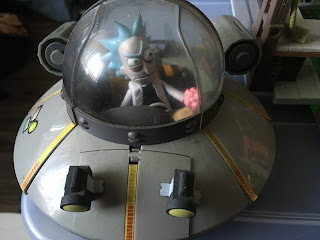 Evil Rick inside of the Spaceship.  Which isn't a bad model, it's just not a good one either.  Some bits still fall right off and the stickers are terrible. 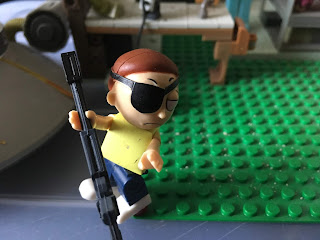 Evil Morty, who seems to be increasingly important 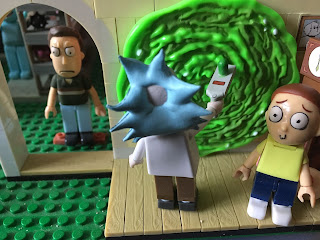 The hallway with the portal effect which is really cool.  Jerry in the background as he should be.  I really hope they do another Morty figure with a better facial expression. 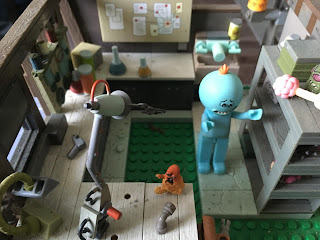 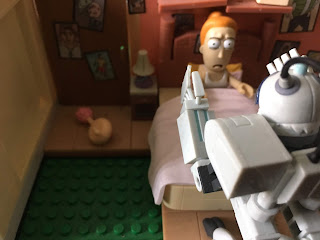 This may well be my favorite set of all, it comes from my favorite scene in the entire show.  Many times I have held the Snowball figure in my hand saying "Where are my testicles Summer".  Believe it or not the Snowball is actually a mini-figure, though it's got a lot of added stuff.  It's actually built quite well and is my favorite thing McFarlane has ever done.  I'm glad I got a Summer figure finally, but I'd like one that can go adventuring with Rick and Morty.  This one is in her underwear. 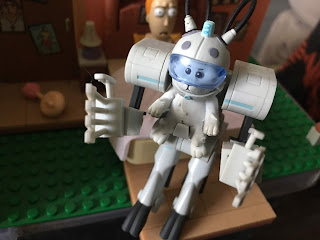 "Where are my testicles Summer" 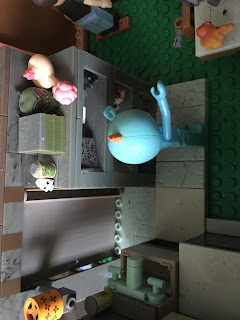 Here's a bad pic of the garage.  Notice the Plumbus.  I now have four of them.  I think you might get one in every set.  That's not a bad thing.

So there you have it.  That's all my Rick and Morty building sets.  Now we're pretty aware that there will never be an official Lego Rick and Morty line, so until McFarlane gives up the license (to Mega let's face it) these are as good as we're going to get.  I still think they're missing the boat by not having these things officially fit together.  But if they can't make the FNAF sets fit together, they're not going to bother with these.