The KINGS are in the Stanley Cup Finals

For the first time since 1993 the Los Angeles Kings are in the Stanley Cup Finals, and I am giddy with anticipation. It's been a long 8 days since the Kings clinched their berth by beating the #3 seed Phoenix Coyotes in the Western Conference Finals, capping off a great run in which they defeated the top three seeds in the West. All season this time had underachieved, only to be saved by the should-be Vezina winner Jonathan Quick, they finally started playing playoff hockey at the right time. Going into the game, which starts in about 15 minutes I might add, the Kings are 12-2 and Quick has an UNGODLY 1.54 GAA. I've been doing my part as a Kings fan - I have not shaved and I have worn one of my five Kings jerseys each and every day for at least part of the day since the playoffs started. What's funny is that I did forget to bring a jersey with me on an overnight tripe we took to Long Beach last weekend, and of course the Kings lost that day. These guys, I hate to say it in order not to jinx it, are looking like a team of destiny. Time will tell if they are. All I can say right now is GO KINGS GO. GO KINGS GO. GO KINGS GO. GO KINGS GO.
Posted by William Noetling at 5:10 PM No comments:

Beyond the creative writing portion of one of my High School English classes, I don't think I've ever written an obituary; not about to start now. But I feel that I would be remiss if I didn't comment on the suicide of one of my favorite players from the 1990's. I was 19 in 1990 when Junior got drafted by the Chargers, but I was already well aware of his on field exploits having watched him at U$C for the previous couple of season. I remember during his rookie year when I was roommates with Otis and Lori out in La Mesa and hearing Otis bellow out "Look at Junior flailing all over the field in the wrong positions." Yeah, despite being a great player, Junior had a lot to learn about the NFL. He would though, spending 20 seasons in the league, which in my mind was about six seasons too long. He really should have stayed retired the first time when Miami didn't want to re-sign him.

I actually met Junior on a couple of occasions when I was an autograph hound at Charger Training Camp. Below are the two remaining autographs of his that I obtained back then. They are, along with my other Chargers autos some of my most prized possessions. Junior was a gentleman with all the fans back then, of course he was mobbed by kids and adults alike, and he would only sign one item from everyone, but he signed for everyone and he was generous with smiles and kind words. 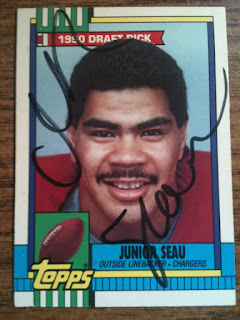 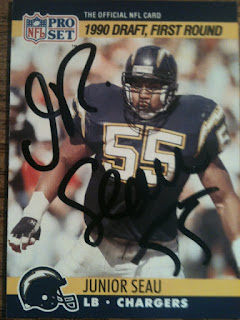 Back in the day I even ate at his restaurant in Mission Valley. I don't recall it being anything spectacular, but it was a quality restaurant.

Junior will be missed, and the league needs to take a look at protecting players with concussions more. IN the end though, it was his own decision to take his own life. And what's sadder to me still is that his autographed card isn't the only one I have from ex-Chargers who are no longer with us.

Posted by William Noetling at 4:34 PM No comments: