I think that just about everyone who was born after 1965 has had something or other to do with Lego, either watching their kids play with it, or more than likely, playing with Lego themselves. I wish I could count myself as a first-generation Lego kid, but alas, that's not really the case. Lego has been around since the late 40's, and their iconic construction bricks first appeared in 1964, but I started playing with them in the mid-70's.

Which is all really cool, but this article isn't really about Lego. I will have something on Lego next week, as we are planning our first trip EVER to California Legoland this weekend for Kaylee's 5th birthday, but SHHHH...that's a surprise.

Nope, this article is about the Doctor Who Character Building line of toys, which isn't at all Lego. Though it looks a LOT like Lego, and feels a lot like Lego, it's really not Lego.

That's OK, there's a LOT of brands that are "not Lego." Even back in the day there was Lock Blox and Mega Blocks, which is not really the same brand as the current Megablocks. Today there's dozens of "off-brand" or clone Lego bricks each with varying levels of quality. I've played with quite a few of them over the years, and I've personally invested quite a bit in the Mega Blocks line of Pyrates and Pirates of the Caribbean sets. NOTHING usually compares to Lego. UNTIL TODAY.

Character Options has had the license to create Doctor Who toys since the stalwart BBC series was revived in 2005, creating a vast line of 5" scale figures, role-playing toys and all sorts of toys and ephemera based on the entire realm of Who and isn't slowing down any time soon. This year they decided to try Construction Toys, as the price of plastic seems to be irrecovably tied to the price of oil (gee I wonder why) many toy companies are looking for ways to expand numbers of skus while contracting the amount of plastic involved. Hence, smaller is better. We've seen this before by the way. Part of the popularity of the original Kenner line of Star Wars figures was that they were cheap to produce and to purchase, so kids could have a lot of them. Their sub 4-inch size was 50 to 75% smaller than other popular toyline sizes at the time (Mego's 8-inch line of figures and Hasbro's 12" GI Joes).

The new line of Doctor Who toys is branded "Character Building" which is actually it's own line of toys, as there are Non-Who building sets and figures that are also available (mainly in the UK) that are compatable, so if you really want to build a military UNIT type squad to accompany your Doctor figures, you can. It's quite cool.

Following Lego's massively popular Blind Packed Figure Series the Doctor Who line is available in both set form, and blind packs. Complete with chase figures. Joy. I managed to find the Tardis MIni-Set online for just about $20 shipped. More on that later. 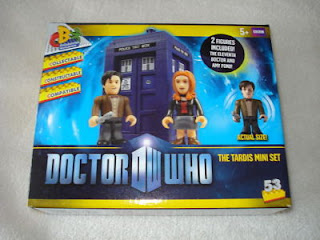 The box is nice and sturdy with the current BBC Logos and nice glamour shots of the actual product. The back has a short write up on the series and the TARDIS and introduces the Doctor and Amy. As if you needed that. We're also shown the figure's actual size twice. So that's something.

The booklet is quite nicely illustrated much in the style of current Lego instructions. They pictures are not quite as good though and there are a couple of instances where even an adult might get confused, but for the most part, it's well done. There's also a parts list, but that's about it. There also weren't any other inserts other than two sheets of stickers. I suspect there's only supposed to be one sheet, as you really only need one sheet, but I got two. 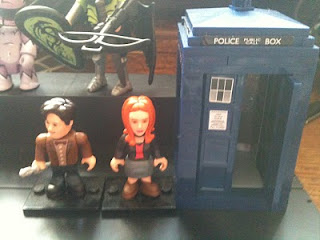 The TARDIS is a box, let's not forget that, so as such it should be pretty easy to build, and it is. Though there are a couple of tricky spots with the doors (those TEENY TINY prongs that form the hinges are very small and could be easily broken. Plus they are difficult to put in their pegs). Once your doors are in place, you definitely don't want to open them inside (as the Doctor always does) because they're very difficult for big fingers to pull out. The size is also extremely deceptive. This TARDIS is tiny on the outside and inside. The entire height of the box including the light on top isn't much more than 3 1/2 inches tall, and it's barely 2 inches wide. In Lego parlance, it's 6 w x 6 l x 9 t.

The bricks themselves feel very close to Lego plastic and appear to be made with the same or similar quality control. There are a couple of unique pieces that I've not seen made as Lego before (namely the top of the TARDIS , the light bulb and the panels of the Police Box). The model itself is very simply constructed with nothing really difficult about the engineering. It's simple enough to not need any additional tinkering either. 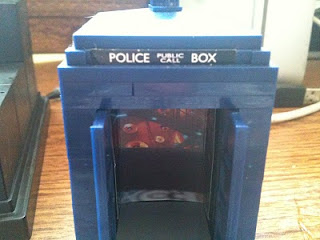 The stickers are well printed, especially the front plaque, but they're still stickers, and for adult fingers they can be a pain to put on. There's also a cardboard insert that goes inside the box which gives the illusion of it being "bigger on the inside". It's a nice piece and doesn't detract from the overall aesthetic, but it can be difficult to get 'just right' in the box. 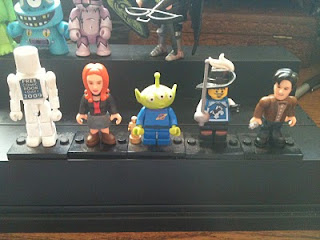 Here's where the set really shines, the Amy Pond and 11th Doctor figures are simply superb. They are virtually the same size as Lego, and infinitely more cute. Plus they have slightly better articulation with the addition of a waist swivel that Lego can never duplicate. They're certainly different than Lego as well, they're much more about curves and roundness with sculpted uniqueness rather than uniformity of Lego. The tampo printed torsos are very nicely done on both figures, each depicting very small details such as buttons and belt buckles. The faces are cute as can be as well, with the Doctor showing a smirk that he knows something you don't know. Plus the Doctor has his Sonic Screwdriver. Very cool. The figures can both sit down, Amy isn't even hindered by her vinyl skirt. I'd love to have more 'accessories' but really what do you need besides the screwdriver?

I purchased this set from Langton Info.com for just over $20 shipped. There isn't anywhere else cheaper on the Net right now. MSRP on this is somewhere between $15.99 and $19.99, which I would consider as pretty pricey. A comparable sized Lego set runs about $12 at retail, and the other clone brands are even cheaper.

I LOVE this set, and I was excited to both order it and to receive it. Especially since I ordered it directly from the UK. I don't know if there's any differences between the UK and US versions, I highly doubt there are, but if so, mine's original! Even though I consider it more expensive than it should be, it's still a great small set, and I can't wait to get more. Problem is you can't find these things at retail AT ALL! I would imagine that they were available to Comic Book stores through Diamond Distributors and that at some point they'll be available widely in the US, since they're being advertised on the BBC America broadcasts of new episodes. I sure hope so. I haven't seen the blind package mystery figures yet either.