Jim Rome is a polarizing figure in sports talk radio and television, to some he's the greatest talking head on tv/radio, and to others he's a pompous jackass who's not much better than Rush Limbaugh. My own personal opinion is more on the positive side than the negative, since I've been listening to him for YEARS.

That's right, I count myself as an original clone. I was listening to Rome waaaaay back in the early 90's when he did his Saturday Scrub Show on XTRA 690 in San Diego. I even remember calling him up about some boxing match sometime in 1992 or 1993. Why I can recall sitting next to Natrone Means in the stands at Charger Training Camp while he was being interview by the young Pimp in the Box.

Once he got moved to the day-time shifts I became an avid, daily listener. I compiled lists of "Jungle Glossary Terms" before the Internet is what it is today. I remember the first couple of Smack-Offs too. I have though, never called the show because mostly I don't have a take and if I did, it would suck.

Now I haven't listened to Rome on a regular basis the entire time he's been on radio. There were a number of years where I was working when I couldn't have a radio at my desk so I never paid that much attention. Today though I get to listen to him when and where I want to, thanks to the internet and 570 AM KLAC's streaming coverage, oh and my car radio. So while I think the days of him calling athletes women's names are over, he's still up to his old antics.

So this brings me to his "rookie card." This is a set of trading cards that 690 used to hand out at events and I managed to snake one over the years. IN fact, I managed to get at least one of the autographed - the late, great Chet Forte was kind enough to his card for me, as did his partner and still a Loose Cannon Steve Hartman. You don't see these sets pop up very often, in fact I can't find another reference to the set on the internet machines. Cool hunh?

And hey, it's another post about sports cards, go figure. At least I'm not pumping my eBay auctions. Oh wait...see what I did there? 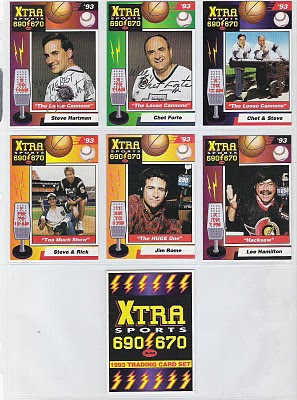 Series 1 will have 14 figures including:


Being a toy collector, I've seen their Baseball PlayMakers on pegs at TRU, sitting there, kind of lonely, not selling well. I have to say I've never been overly impressed with McFarlane's toys, most of the ones I've ever held/owned feel like they're made from inferior plastic. I'm also well known as an articulation junkie so the barely poseable plastic statues that McFarlane has pumped out for years in the sports realm has always left me cold. I haven't taken the bite on any of the Baseball figures yet simply because there isn't one player out right now that I even like. Then again McFarlane has always neglected my favorite teams, I guess he just doesn't like me. (The one time I met him at a ComicCon I was nice though, so I dunno).

For the record, McFarlane has done a TOTAL of FIVE Los Angeles Kings in their NHL line and NONE since 2006. To make matters worse they've only done SIX Angels! It doesn't get much better in Football for old Will either, they've only done eight Chargers, but get this FIVE of them are Ladanian Tomlinson (The other three are Brees, Gates and Rivers, so I guess that's not too bad). Pro Basketball wise, I don't really care about the Lakers that much, but at least Todd's shown them some love with 16 figures since 2002, and all the big names are represented.

In any case, I might go ahead and pick up a Favre, Peterson or a Brees if I see them. I'd like to see the line do well, because perhaps that would me a "Classics" line would be possible and I could get some of my faves from years past, like Dan Fouts, Barry Sanders and Marshall Faulk.

Honestly my love of multipoint articulation comes from the great toys of the 70's, mostly Megos, but I also had one of these lads:

I know I had the Chargers figure because I lived in San Diego when I got it. I look for them on eBay every now and then when I remember what they're called. I think I'll remember more often now that I've blogged about it. Any readers out there remember these guys?
Posted by William Noetling at 7:18 PM No comments:

I've listed a bunch more comics on eBay, and if you're a reader of this blog - you wanna buy something, let me know in the comments and I'll throw in some free bonuses!


Check them out will ya?
Posted by William Noetling at 9:48 AM No comments: