I have started my 2010 Fantasy Football League, and am looking to add new owners again this season. I have 4 confirmed at the moment and invites out to a number of others. If you would like to play in a FUN but competitive league, one that I've been running in one incarnation or another for almost 20 years, then leave me a comment.

Thanks.
Posted by William Noetling at 1:46 PM 4 comments:

So it's been a little more than a month since I started my hardcore "let's get RID of this stuff" eBay selling, and I thought I'd catalog the results so far since it's actually been pretty interesting.

So not too bad. Could be better, could be a lot worse.
Posted by William Noetling at 1:16 PM No comments:

Yes, it does appear that my blog is now just a whore to pimp myeBay items. But hey in the last 30 days I've sold almost $400 worth of stuff, and believe me, that money has come in HANDY.

In any case, today it's Comic Books, and I've listed a bunch of nifty series and trade paperbacks, including a VERY hard to find Batman: Sword of Azreal Gold Tradepaperback>, and some really nice copies of Transformers: The Original Marvel Mini-Series from 1984 that I totally forgot that I owned!

More stuff is coming, so make sure you check back with me!

Thanks for looking
Posted by William Noetling at 10:52 AM No comments:

You know at some point I may actually blog about Baseball Cards again, in fact in storage I found a really nifty 9 card set from Upper Deck that was released in conjunction with the PBS Ken Burns Baseball Documentary that I will blog about at some point, and also even though I missed the All-Star Fan Fest in Anaheim, I could share my memories of the 1992 Edition in San Diego, which was one of the most fun times I've ever had!

But right now, I'm in the drive for funds hardcore, and I've listed a bunch of new items on eBay. These aren't your standard collectibles though, they're Movie Press Kits. What are those? Well, back in the day before the internet, movie studios used to either send Press-Kits out or give them to members of the press at screenings, and basically they're official stills and production information that print media used to write puff-pieces or review the films. My Uncle used to edit BOXOFFICE magazine, which is an industry trade publication for movie theaters that's been around since the 1920's and still exists today. As a wee lad I used to beg for any movie memorabilia I could get my hands on, and boy did I collect a BUNCH.

The cream of this crop is undoubtedly the Princess Bride kit, which I am extremely reluctant to sell, but my wife said to sell it, so I will. Here's a pic: 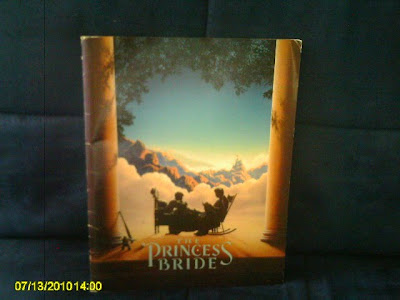 I also found official press-stills for a NUMBER of older films, including ALIEN and DUNE, but those aren't being sold (quite yet).

In any case, if this intrigues you, please bid and bid high. Thanks.

Oh and in case you were wondering, the Jeter Auto sold for the BIN price of $99.49, to a guy in New York. Go figure.
Posted by William Noetling at 7:42 PM No comments:

Jeter is in the HOUSE - But for HOW LONG?

Remember back in March I blogged about the Jeter card I pulled out of the Topps Million Code Transmogrifier? Well I had it delivered. Also did you know that in certain states you don't have to pay for the delivery? California is one of those states, so I didn't have to pay at ALL for UPS Ground with tracking and insurance!

In any case, the card JUST arrived a few minutes ago, I took a couple of moments to scan it before I threw it up on eBay. Here's the card in all it's glory: 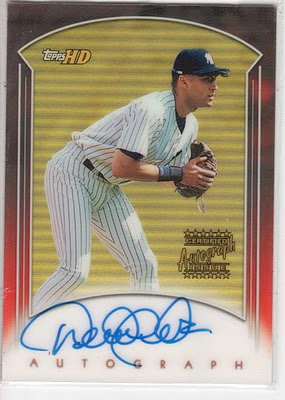 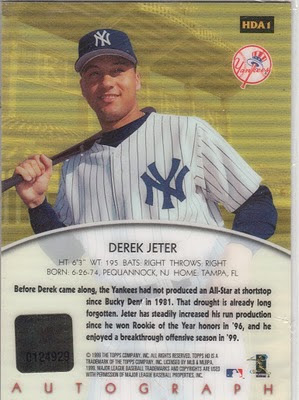 I also had a 1958 Russ Kemmerer card delivered just because I don't really have anything that old in my collection and I thought it'd be cool to have. Here's those pics: 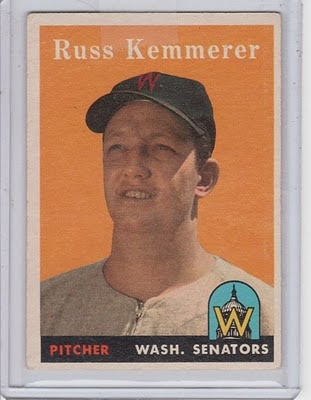 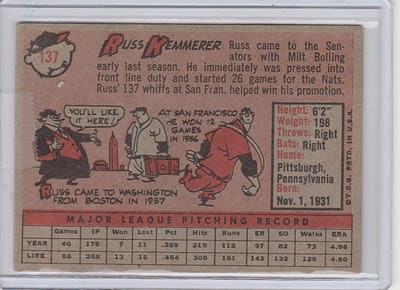 Now the site doesn't claim to give you MINT cards, you expect a 2000 year card to be mint, and it is, though they didn't send it in a Top Loader darn it. Fortunately there was no damage. They probably didn't protect it better because the card is pretty thick. The 1958 though is in PRETTY good shape, I see a minor crease and the corners are slightly fuzzy, but it's solid.

Anyway, if you're interested in the Jeter, it's on eBay.
Posted by William Noetling at 3:25 PM 2 comments:

As you know the Budget Collector is on a SERIOUS budget lately. Can't afford much collecting at all these days, I've bought exactly four packs of Topps Series 2 and one Jumbo. Now I did pull that NICE Silk, but nothing else to blog about these days. Don't even talk to me about Allen & Ginter, I can't afford even a Hobby pack of that stuff right now.

Why is that you say?

The dread CAR REPAIRS. I was doing a favor for a friend last night, picked him up from the Airport at 9:30 at night on the tail end of a holiday weekend. Traffic was NASTY at the airport, but not so bad that we weren't out of there within 10 minutes of Gabe getting into the car.

Anyway, few minutes later we're driving down Airport blvd on the way to La Cienega and I notice a rattling sound, just a bit odd. THEN I notice the temperature gauge is all the way on H and there's steam coming out of the front of the car. I've had this happen before on another car, and I drove on it too long and cracked the head gasket. Once you do that your car is never the same. So we pulled off the street to a closed McDonalds and called AAA to get towed home. Fortunately I live next door to a service station, so I took it over there this morning. The bill is just under $500 for a new radiator, radiator hoses and thermostat.

SO, the Budget Collector is selling some stuff to hopefull recoup SOME of the costs. Here's my current eBay listings, it's all DVDs at the moment, and I doubt I have any good cards to add on, but you never know, I'll be scouring the apartment for as much stuff as I can find to turn over.

Buy some stuff? If you do I'll mention you on the blog and give out whatever link you want!
Posted by William Noetling at 11:57 AM No comments: