I love January, it's the month of my birth after all.  The annual UK Toy Fair is also in January whereas the American version is held in February.  For toy enthusiasts the New York version is much more important, but for Doctor Who fans, the UK version has everything we could possibly want.

2014 marks the 51st year for the stalwart BBC Science Fiction Franchise and there's a brand new Doctor for the New Year as Peter Capaldi has taken over the role from Matt Smith.  Journalists overseas got their first look at the first products to feature the 12th Doctor, though not in his new outfit, as that has not been revealed quite yet.  These are very important nuances to Whovians, no doubt when the new costume is revealed it will be fairly big news.

Shown today were the lineup and prototypes for Character Building Dr. Who Series 4 figures, a new version of the new interior of the Tardis playset, and a Judoon scout ship mini-set.  I'll probably not be able to afford the big new Tardis, which looks much much better than the version they showed last year.


You can check out pics of the entire line here:

They are also releasing the Looney Tunes line of compatible figures which were announced way back in 2012.  When I say compatible, I mean  you'll be able to put Bugs Bunny side by side with the Doctor or a Dalek.

Posted by William Noetling at 1:08 PM No comments:

It has taken me an entire season to stop buying Baseball Cards and transition back to Hockey Cards.  Why this has taken so long can be explained by a lack of funds and by a lack of interest in said Hockey Cards, even though my beloved Los Angeles Kings won the cup only in June 2012.  However, as you can tell by my most recent posts [Here, here, and here] I've been back with as much vengeance as I can muster.  That is to say I've bought a bunch of packs and some singles recently.

Something that I think the hobby shop industry needs to do is to get more bodies in the door, and card companies offering free products as incentive is certainly a way to do that.  The comic book industry has their own Free Comic Book Day and even though my days of collecting dozens of tabloids are gone, I still make it a point to stop into the comic stores on the first Saturday in May every year.  I know there was a Free Baseball Card Day in the past though I can't say if it's still going on.  I know there's some great promotions that the NFL licensees run also.  2014 marks only the third year that Upper Deck has been running National Hockey Card day in the US, but the sixth in Canada. 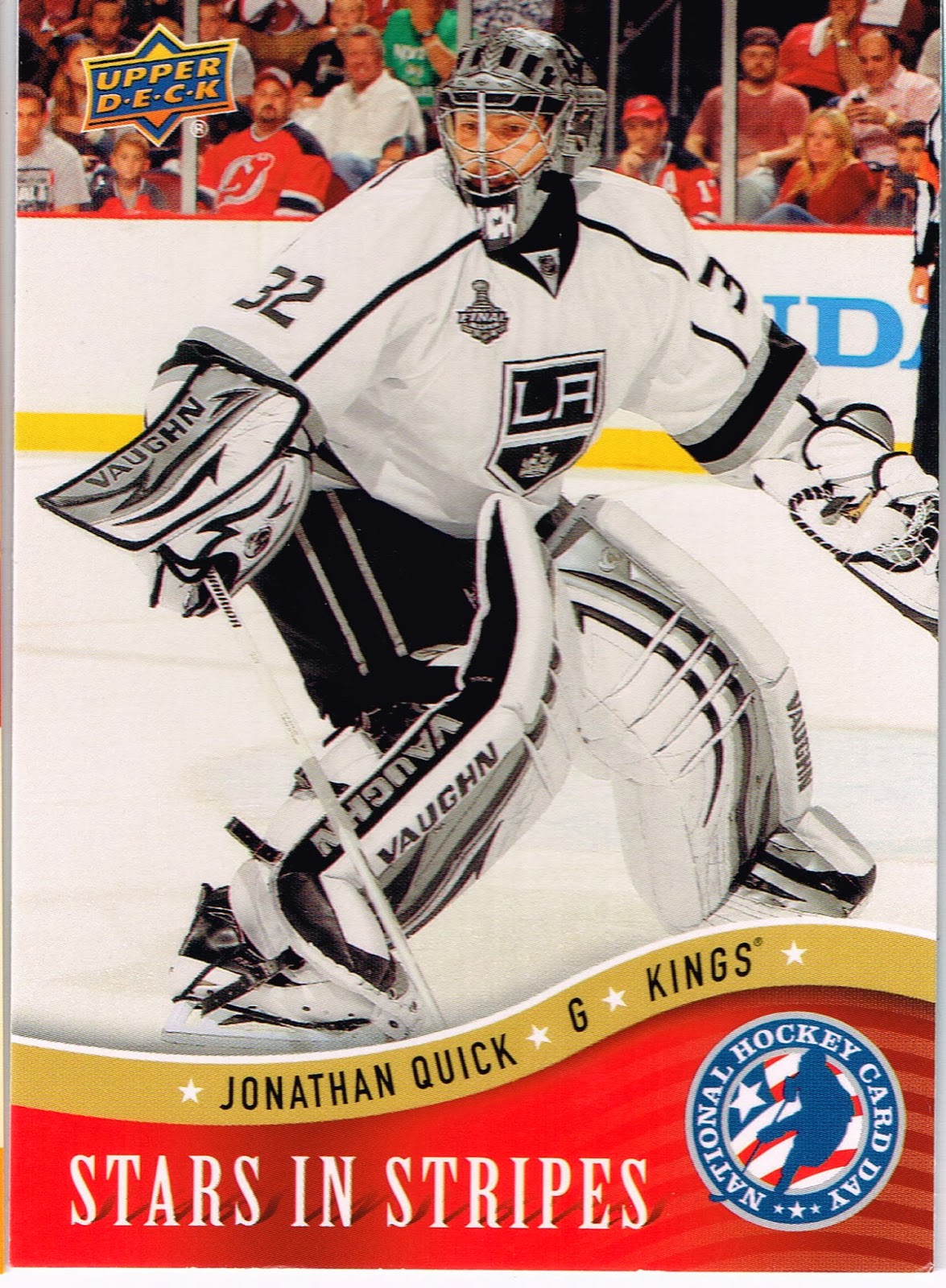 The first thing I did upon remembering that I wanted to go to the card store was to CALL my local shop California Sports Cards but they weren't participating.  The only other major shop I know of in the area is The Bullpen 2.0, which was a shop I used to go to until they closed and changed ownership, but now they're back to the original owner so I'm pretty happy.  I've always had good luck down there, despite being about a 20 minute drive away (yes, it's Los Angeles, as the crow flies it's like less than 10 miles), so while I don't go there very often I'm always happy to shop when I can.  I used to buy Pirates by WizKids there back in the day.

So they had their obligatory posters in the window and the owner Mitch was more than happy to supply my wife and my daughter with packs as well as giving me one.  We each also got the extra #21 card.  When we didn't get a Jonathan Quick in our packs, he gave me the one he pulled along with the other 4 cards in the pack he opened.  Sadly there were more kids buying and playing Yugioh than sports cards buyers, but hey, whatever keeps the doors opened.

Mitch was also nice enough to gift me with a few leftover packs from LAST year's event and I'm only two cards away from having THAT set. 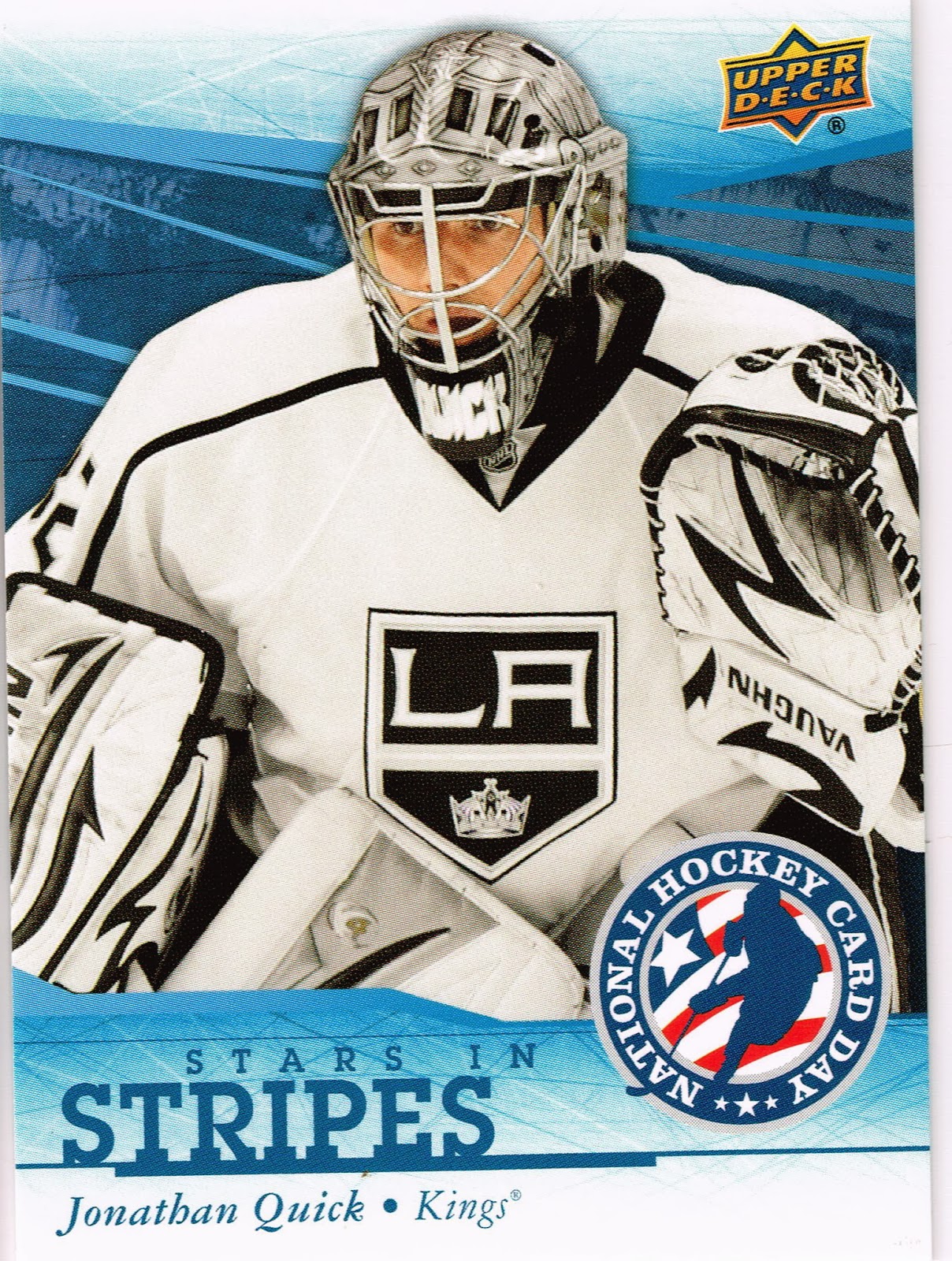 Since I'm back buying cards, I thought I might even dabble in Singles, since I'm not pulling enough good Kings cards from packs.  In the last month I've snagged several Martin Jones
pre-Rookie Cards, since he doesn't have any official NHL rookies.  I bought them after his second shut-out and I'd like to get more.  He's featured in the 2006-07 to 09-10 Calgary Hitmen team sets, and then the 10-11 to 12-13 Manchester Monarchs team sets.  I have a special affinity for the Hitmen since they were formerly owned by their namesake Bret "The Hitman" Hart, my all-time favorite wrestler.

I'll show off my recent purchases later in the week, you know, just for some content.

Until then, here's a link to my want list if you've got something I need, hit me up, I'd love to trade.