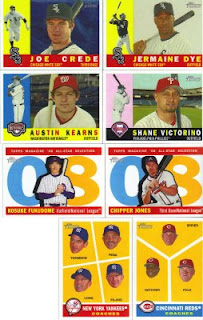 I so rarely have the opportunity to actually purchase a blaster box of cards these days, let alone a full box, thus I don’t really post these very often. But this morning the stars, the moon and the sun all aligned properly and I managed to snag a box of Heritage for a very, very, very reasonable price. So reasonable I cannot divulge it, suffice to say, it was cheap. 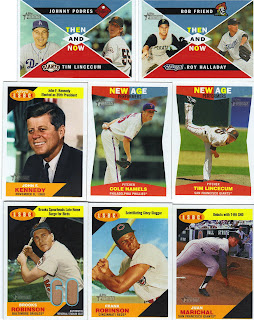 Typically bloggers complain about Topps collation issues, especially in their Non-Sports sets. I have to say, I have NEVER had a box have perfect collation before today. There were NO DOUBLES in this box. None whatsoever, and with the exception of the “News Flashback” and the Mayo insert sets, I got more than my share of the standard inserts. In fact, I did a little bit better than average I think. The SPs fell perfectly every third pack. I should have gotten one more Mayo since they were supposed to fall once per four packs, but I’m not going to complain. I also should have gotten one more News Flashback given they fall two to a box. I did pull a refractor which I wasn’t guaranteed and one extra each of the New Age Performers and the Then & Now sets. 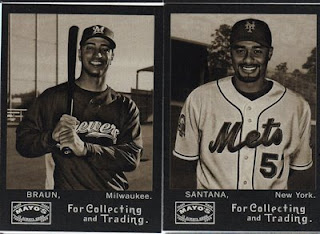 I really like the Baseball Flashbacks, so I’m glad that my relic was from that set, and it’s a pretty nice relic too. Any time your relic is a HOFer you should be pretty happy. Sure, it’s a piece of a seat from Memorial Stadium, but honestly it looks like it’s two different cuts. There’s no legalese on the card either, which is different. Looking at eBay I see that there are more than a few of them available right now, starting at less than a buck. The nice thing, however, is that there have been 10 completed single-item auctions in the last 90 days, the highest selling for $40 and the lowest selling for $11.99 with an average of about $18.50. 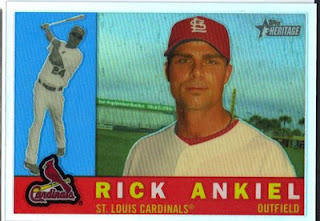 One last thing about the inserts is that there were 25 total inserts or SPs, which to me is great, since it averages out to at least one per pack. Problem is that they didn’t actually fall one in each pack, in two of the three packs that contained the Chrome parallels also contained a Mayo card, and at least three packs had no inserts at all.

The only real issue I had with the box is that there were a whopping THREE Angels cards. Out of 191 I got 3 Angels. That’s not nearly good enough for me. With 30 teams in MLB, one should expect at least 5 or 6 cards of any given team, but not in this box. I also didn’t pull ANY of the Super-Seven Variations, but that’s not surprising. I don’t have much luck pulling those, with the exception of the Fukudome Japanese card from last year’s UD.
I’m not planning on set building this one, though I think I’ll keep the Mayo inserts and try to build that set since it’s only 10 cards. If you’d like any of the base (besides the Angels) or any of the inserts, I’d be happy to trade for Angels, UCLA Bruins Basketball Alumni, Topps American Heritage, Indiana Jones Masterpieces or Barack Obama cards.
Posted by William Noetling at 4:31 PM No comments:

I'm a sucker for online added value gimmicks. Last year when Topps announced ToppsTown I actually got a bit excited, though I didn't like the prospect of actually having to CHASE code cards. Be that as it may, as I posted back in August I completed my 2008 Baseball card virtual set in just 2 months time. No, I didn't get anything special for doing it, just the satisfaction of being a shrewd trader and enjoying the game.

This year ToppsTown is adding a bunch of new stuff to the system. Sure there are a TON more mini-games, though honestly they're all pretty much the same. Fun for about five minutes and then boredome sets in. I do like the "Extreme Batting Practice" and will play that consistently, but most of the other games have been done better at other places. When Football and Basketball were added to the mix they also added a Fantasy sports portion, which I think is kind of cool, because I'm into Fantasy Sports. Thing is though, you can only use players that you've virtually collected, which is great. I hope they add a Baseball version when the season starts. I'm not doing too badly in Basketball this season, I have Kobe Bryant as a starter, so don't cry for me!

I didn't do Football, because I no longer collect Football, and I couldn't get any fellow collectors to pass some codes my way...sniffles. The stupid thing about ToppsTown is that you cannot trade Baseball for Football, or Football for Basketball...you get the picture. Sucks. I've got a TON of doubles in Baseball, and now that 2008 is over, they're worthless.

Which brings us to 2009 Baseball. One code in every pack, guaranteed. Yeay! Actual players on the cards! Yeay! 22 Codes in, and I'm only 80 cards away from a full set. I have approximately 30 doubles at the moment, and you get 8 cards per code, so with trading, I'm only a few codes away from finishing. The cards are a much better design this season, and they included 8 HOFers in the set. I've already got them all, so I favorited them and here they are in one spot: 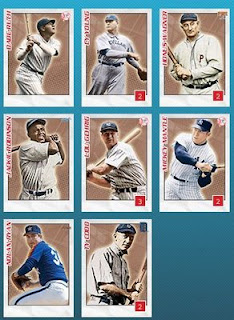 Let's take a closer look at Nolie there, you've got his regular front: 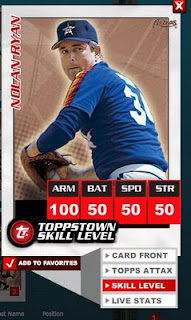 Then here's his "Attax" stats, which is for a game similar to Top Trumps that is coming soon. You may have seen the advertising card in some packs, you get a FREE ToppsTown code on that baby (it's TPSCDE7). 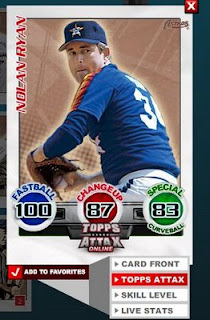 Finally his in-game statistics which are used for the mini-games. Obviously Nolie would be good in any of the pitching games. 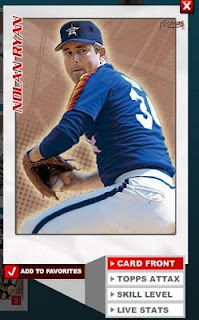 There is another link to each card, during the season you can get "live stats" for current players, which is cool, but unnecessary.

There's also another feature coming soon, the ability to use the code cards in some sort of 3D
game, but I'm not sure what that is going to look like actually.

BTW - I'm Mr. Duke Baseball on ToppsTown, feel free to add me as a friend!


I'll do UpperDeck U with my next blog entry, hopefully some time before the weekend.

I know i'm not anywhere NEAR as regular as other bloggers, that's kind of what I like about Blogging, I can do it whenever and wherever I feel.