I grew up in San Diego, living there from 1980 to 1998.  While I never really lost my first allegiance in Baseball which was for the California Angles (and NOT the Los Angeles Dodgers) I rooted for the Padres due to the home-town bias.  Didn't hurt that the entire time I lived in San Diego I was never further than 5 miles away from Jack Murphy Stadium.  Subsequently I was there and fully entrenched in Padre-mania when it hit in 1984, fueled by the spectacular season that one Tony Gwynn tore through hitting .351 with 213 hits playing Right Field.

I once owned a Tony Gwynn Rookie Card, his Topps issue, coveted by many in San Diego, more so than his Fleer and Donruss issues from the same year.  For one Topps was still "THE BRAND" back then and for two, the newcomers' cards were boring non-action shots, and his Topps showed, well, his ass.  Yup.  One of the greatest rookie cards in Padre history shows his butt.  Something even more curious I noticed, in my friend Laura's picture of Tony's rookie card, he's wearing a number in the 50's.  We all know his uniform number was #19, so hmm... 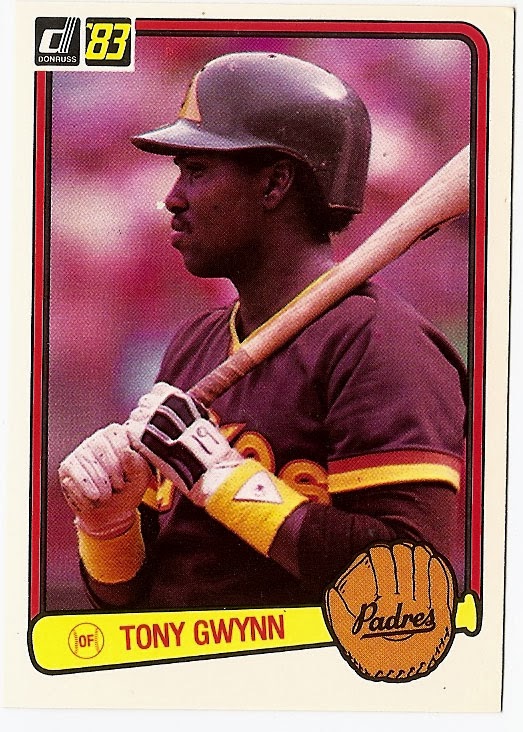 Seemed like outside of San Diego Mr. Gwynn was well respected, but not that well known.  That's OK, he was our hometown hero, after all even though he was born (like myself) in Los Angeles he went to SDSU and was a Lincoln High guy as well.  After he retired he went back to work for SDSU coaching.  He was a stand-up guy and there are tons and tons of tributes flowing over the last couple of days as there should be. 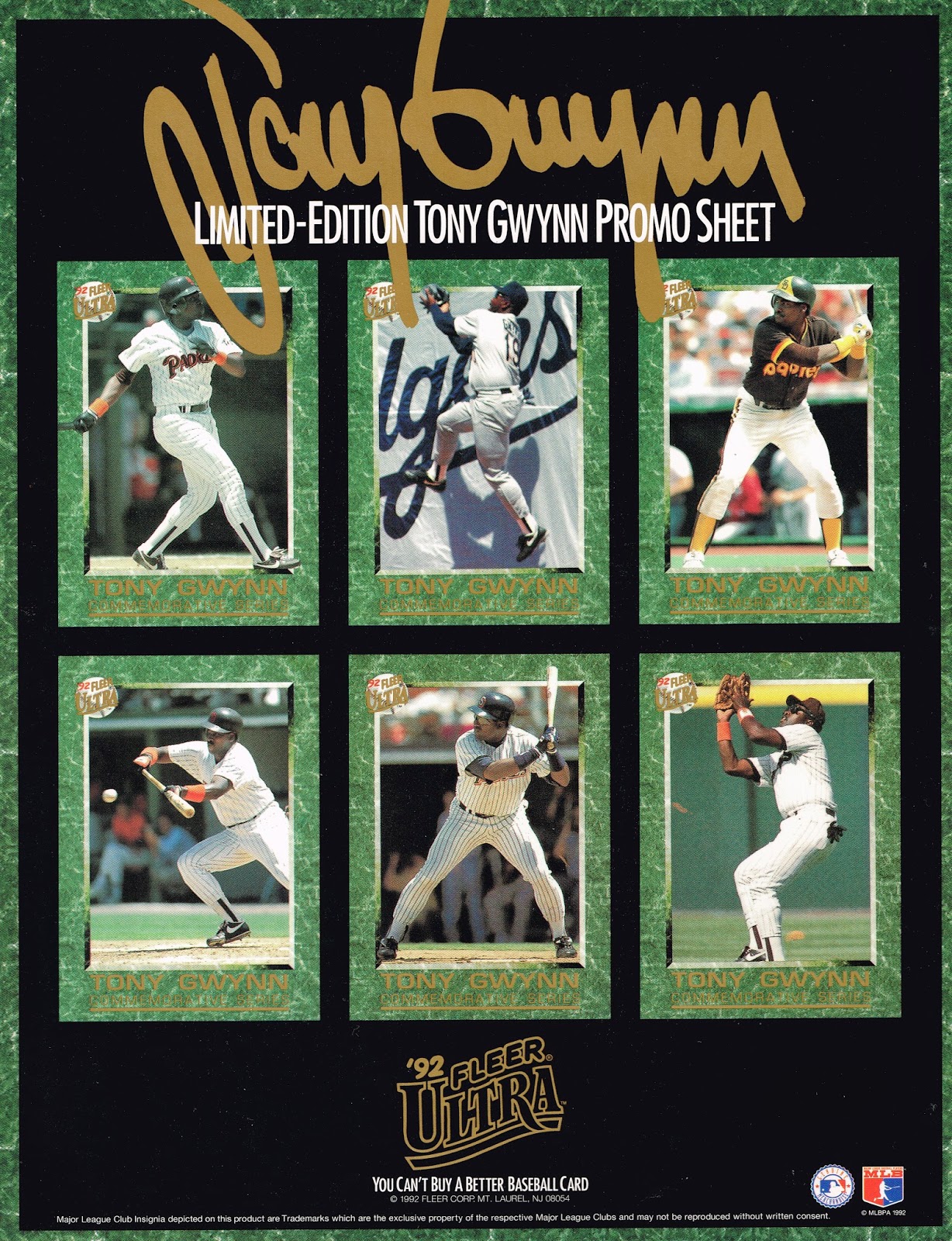 I don't personally own much Gwynn memorabilia anymore, I may have some stuff still in storage.  I was at the game where he won his final Silver Slugger award, and that was pretty special because if I recall correctly it was a really close race between Gwynn and Colorado slugger Larry Walker.  (Gwynn won the batting title by 6 points, .372 to .366.

I did attend the 1992 All-Star Fan Fest in San Diego at the convention center, one of the first times I'd ever been there, having eschewed the first two SDCCs at the new hall along Seaport Village (total honesty - I've never been to Petco either).  One of the promos was this wonderful full page sheet showing the complete 12 card set for that years' inserts.  The first 10 cards were found in packs about 1:13 or so.  The last two were mail-aways, a common component of sports collecting that I loved to go after back in the day. 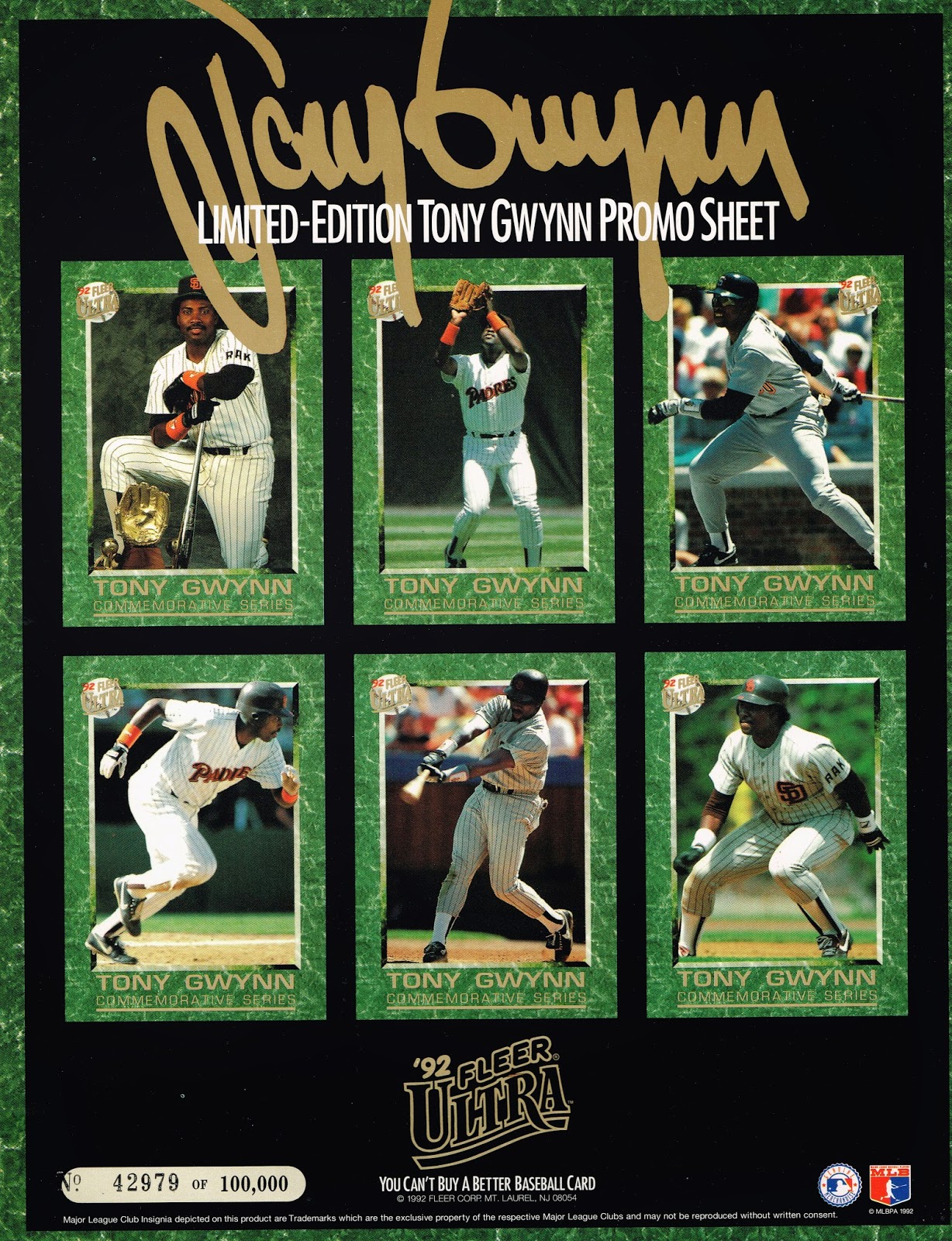 This sheet has more sentimental value to me now than monetary.  It represents the early 90's so fantastically.  Upper Deck had been doing these "limited edition" sheets for awhile and Fleer wanted to get in on the action.  If you want one I notice there's one listed on eBay for a $5 bid/$10 BIN.  It's not my listing, so I'm not linking, but you can find it easily enough.  Search "1992 Ultra Tony Gwynn."

The sets of 12 themselves seem to be readily available at under a buck a card too.  Even for the mail aways.  It was the era of junk wax.  It might be more fun to find 1992 unopened Wax and search for the certified autos.  Wait, what's that you say?  Yup, Tony signed 200 of EACH CARD and they were inserted.  So theoretically there's a 10 card signed set out there somewhere.  Yikes.  Back in the day these cards were valued (by Fleer) at $50 each.  They're also readily available on the Bay of E for under $100 each.  Not too bad for a HOFer.

One last thing and here's where I'm going to get a bit preachy.  Tony died of Salivary Gland Cancer, which he contracted from years of chewing tobacco use.  I've had a few friends in the past chew tobacco, and I've never understood the habit.  Really.  It's disgusting to the Nth degree.  And it's dangerous.  It's high time that MLB took a hard-core stand, rather than the still tacit appeasement that they currently have.  Then again that would have the MLB take a stand on SOMETHING and we all know that under Bud Selig they don't stand for anything.
Posted by William Noetling at 11:59 AM No comments:


RIP Tony Gwynn. My 17 years in San Diego encompassed almost your entire career as a Padre. Saw you win your last Silver Slugger award in person. It was magical. You were the best pure hitter in the game, and I loved you for it. Following the path laid down by Ted Williams and Rod Carew you made the game more fun every time you played. So sad.
Posted by William Noetling at 9:11 AM 1 comment: