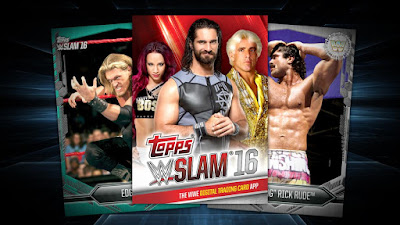 Topps seems to have cornered the market on Digital Trading Card Apps.  First with Baseball and Bunt, then Football with Huddle, onto Major League Soccer with Kick, moving into the entertainment world with Star Wars and The Walking Dead, moving to the octagon with UFC Kick, and finally most recently the WWE and SLAM!

All the apps function basically the same, you get free coins each day you log in, you can spend those coins on digital card packs containing at least 5 cards usually.  There are inserts and hits including highly sought after digital Signatures and Relic pieces.  These cards can sell for big bucks on eBay.  Yes, digital cards. 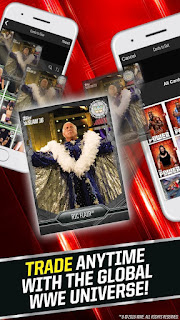 In Bunt, the baseball game, Signature cards have sold for hundreds of dollars.  In Star Wars the first "insert" card ever released, so called "Vintage Han Solo in the Cockpit" went for a couple hundred at it's peak.  Yes, digital cards.

Now I have gone on and off with virtually all of the apps, and at this time I'm in all of them except Soccer.  I really only care about Star Wars and WWE Slam.  I was into Star Wars on Day 1, but took off a several months, only recently coming back.  I've got a decent collection, but I missed a ton of releases.

In Bunt I'm only collecting Angels, and Mike Trout specifically.  I'm not collecting anything specific in other apps.  This allows me to cross trade, which can be a bit tricky some times, you always run into the possibility of being scammed or burned.  But if you're smart you can mitigate that risk.

So there's an app for The Walking Dead.  I started playing it a couple months ago, before I had even watched a single episode of the show.  I have read all the comics, but only started binge watching the show in mid June.  I got up to the beginning of Season 5 before I had to take a break.  I'm not collecting a lot, besides the Fan Choice set and the free daily teal singles.  I have completed a base White, Blue and Red set (your standard Common, Uncommon and Rare base).  Since I don't really care about collecting, I can and usually do stash my coins for when the Fan Choice hits once a week.  the last couple of weeks I've managed to get more than one of the Fan Choice weekly card within a few packs, so by yesterday I had over 200K coins stashed.  I decided to blow a few on some packs and went for the 10K Base expansions.  I pulled an Aqua Variant of Daryl Dixon, with a card count of 31.  Yup thats a big hit.  Ebay has it going for $15.


Over on WWE SLAM I've been watching the insert releases and noticed something awfully interesting.  Most of the insert sets have had a similar pattern, they're releasing 6 or 7 card sets with three different variants.  The "easy" variant is a 1:10 pack pull, but once a card is released it's available for the run of the set.  The mid-range variant is usually a 1:15 or 1:20 and available for only 24 hours, then sold out.  The "hard" variant is either 1:25 or 1:50, and capped at 750 or more commonly 1500 cards.

As the releases went on, a pattern began to emerge: the "easy" variant of the last couple days' releases were actually the lowest number card count.  The final trading day before the award is released there's a frenzy in the fan feed looking for the final card for the "easy" set, and there just aren't enough to go around. 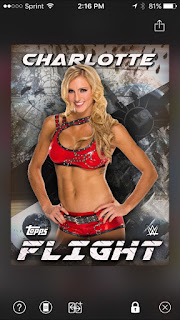 See by the final day, there are multiple releases available for that 1:10 pull.  So your 1:10 is a 10% chance to pull ANY of that set's releases.  Obvious math indicates that it's a 1:60 or 1:70 pull (depending on how many cards are in the set) for the final day's cards.

THIS week we had two insert sets ending on the same day, FLIGHT and "Family Ties".  Both with 3 variants, and both with 6 cards.  They both ended on Thursday August 11, and coincidentally (or not maybe) Topps chose that day to release a brand new huge set, HERITAGE WAVE 1, which funneled off a ton of pack purchases.  By the end of the day, there were a total of 769 White Charlotte Flights and 533 Black Uso Family Ties. 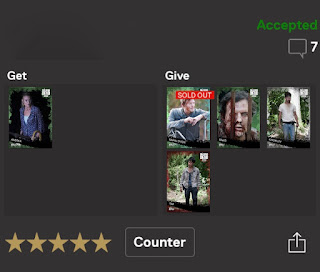 Now I did buy a couple of Heritage packs early in the day for 10K coins (the Insert sets are only 5K) but as soon as I realized I needed to finish my Family Ties set, I stopped and started going for Family ties packs, and actually managed to pull the rare Black Usos.  At that time I still needed the day 5 card, the Rhodes Family, but I was able to make a trade for that.

Remember what I said about The Walking Dead cards earlier and cross trading?  Well watching the fan feed I found someone who wanted Walking Dead for their Slam, and had a White Charlotte Flight for trade.  I made him an offer he couldn't refuse.

I gave up the Aqua I got the previous day, plus a couple of other rare base expansions and he traded me the Charlotte Flight.

So once I got it, I immediately advertised it on the WWE Fan Feed and on reddit in R/TOPPSWWE.  My minimum trade was for a signature card, which at that time were selling for at least $5.00 and more like $8 to $15.   After a couple of hours of truly awful offers, I decided to put it on eBay with a fixed price at $14.99 or best offer.  The first offers came in and they were pathetic, less than 1/3rd of asking price.  BY that time I already had trade offers of at least 3 mat relics from Heritage (which are selling for between $1.50 and $4.00 depending on who they are, the ones I was offered totaled about $10). 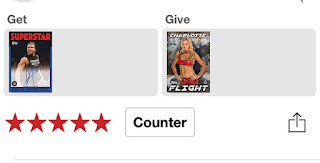 I finally accepted a great offer, $8.00 cash via Paypal and a Dean Ambrose Signature (worth about $8.00 right now) through eBay.

So here's a spreadsheet with all the current insert cards and their population.

My Topps user name is Grendelsen unless noted