I don't think that it's any secret that I LOVE Lego and Mini-Figures that are compatible with Lego. After all I've been showcasing my Character Building Doctor Who figures for quite some time. I've even been buying up single packs of the recent Mega Bloks Power Ranger Samurai figures because I found them to be enjoyable and cheap. And I mean cheap, the last two I bought cost me a TOTAL of $0.62 before tax thanks to Target's after Easter Sale.

AFOL (Adult Fans of Lego) have been customizing Lego Mini-Figures for quite some time now, and I think it's safe to say that you can practically find any figure in any decoration if you look hard enough for them. I've already seen fantastic figures from GI Joe, Star Trek and Battlestar Galactica on the internet. One area that doesn't get a ton of Mini-Figure love though is sports, and it seems like it's a no-brainer. Sure Lego did their own NBA Basketball line a few years back, and while that was actually more of a fun game than collectible, beyond soccer and a few NHL figures they haven't returned to Sports. Now they have just announced Official Olympic Figures in blind packs to be sold exclusively in the UK during the Summer, but they haven't gotten around to Baseball.

And now they probably won't.

Because Major League Baseball and the Players Union have teamed up with OYO SportsToys for a FULL LINE of Baseball Mini-Figures. And when I say full line, I mean it, every team has practically a full starting lineup of figures available and a generic player who isn't really anyone specific. Each player is unique too, their facial features are as close as they can possibly get at this scale, and their uniform numbers and names are tampoed on the back. 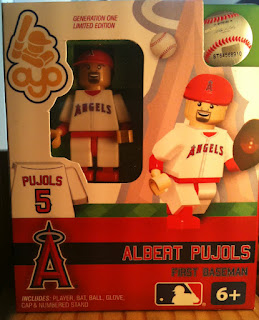 Each figure comes shrink-wrapped in their own collector's case which is a green colored sturdy plastic case surrounded by a full-color cardboard sleeve. The graphics are as professional as you'd expect with a major license. The back shows CG pictures of the player in action and has the expected legalese. The case splits into two pieces, with the bottom having a single stud which I guess is there to attach the base plate to, that's what I did. It's kind of a shame that the case doesn't have a lid because without the paper sleeve the case is left open. They mention on their site that they designed the package to resemble a baseball card and to be able to place in a kid's pocket. That would be great, but if the kid loses the paper-sleeve then their figures will stay in the case, but the extra items won't. 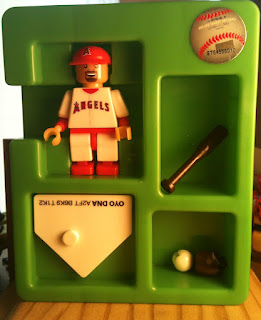 Each player comes with a ball, glove, bat, hat and a base-shaped stand which is individually numbered with their unique "DNA" code. At this point there's nothing to do with the DNA code, but I would expect that at some point you'll be able to input them into OYO's website for some added bonus content.

The basic shape of the figure is very close to their Lego forefathers, but OYO's limbs are drastically upgraded. Each player has bending knees and swivel biceps, so where Lego mini-figures have only seven points of articulation, these guys boast an amazing 11 POA. They also have angled wrists so that they can actually hold their bats in two hands! This extra articulation allows for some great poses that other Mini-Figures just can't achieve. The only thing that would make these better would be a swivel waist, however I do understand why they don't have it, a swivel waist would reduce the number of support studs from two to one and with the added articulation of the legs I can imagine the engineering wouldn't hold up. MOST Mini-figures avoid swivel waists as it is. 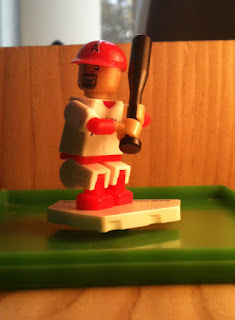 OYO makes a point of saying the hat is an accessory, I don't know if I would do so. The included bat is pretty solid, if not spectacular. The ball and the glove both have very nifty slits molded in so that they fit nicely in the figure's "claws". The glove doesn't really look like a baseball glove to me, but it does the job. The ball is servicable, but I would love it if they could have molded some seams into it. The home-plate shaped base has one stud on the top and three female studs on the bottom, so it can be attached to a base plate or the bottom of the carrying case as seen in the pictures. 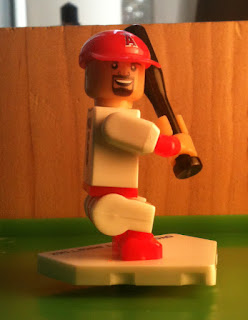 Personally I want to have the complete collection of Angels players, there are 11 available, and I now only need 10 more! The cost of these though is going to be somewhat prohibitive, as they retail on OYO's site for $12.99 each! When you consider that Lego is doing blind-bagged figures for $3.99 and MegaBloks are a buck cheaper, and Character Building figures cost me $4.99 imported from the UK, these guys are just too expensive. If OYO can drop the cost a few bucks with their next edition I think they'd be better served. While the case is a nice extra, I'm sure it's adding quite a bit to the overall cost, and that's money that can be better spent on more figures! 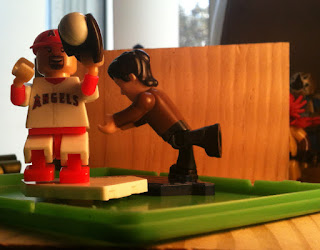 That's not to say you can't find a bargain, my Friendly Local Baseball Card Store "California Sports Cards" just brought in a case at $10 each! When I saw them there this morning my eyes lit up as I've been looking for them at retail for over a week. I thought I was going to have to hit up Dick's Sporting Goods as the OYO site says they're selling them there.


OYO really seems to have their marketing department running in overdrive too, they're out and about at several ball-parks around the country, including Fenway where the creator of the company got his idea to make fully licensed Baseball mini-figs. They're active on Twitter and have their own blog. I half expect these guys to show up as special Stadium Give-Away figures too. In fact I kind of hope they do, that's a great way to get a huge number of these little dudes into collector's and kids hands. 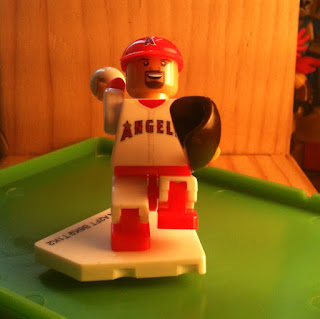 Oh yeah, and on their website they're advertising Hockey and Football figures coming soon. If I could build an entire LA Kings starting lineup I'd be as happy as a little girl.

DISCLAIMER: The product featured in this article was purchased by the author. That doesn't mean though that I wouldn't accept SWAG and review it fairly, I totally will. Send me an email at WMNOE@YAHOO.COM for details.
Posted by William Noetling at 2:51 PM 4 comments:

I HATE April Fools, Except...

Let it be widely known here and now that I, William Matthew Noetling, HATE April Fool's Day. My hatred comes from working over at Pojo.com for several years and inevitably on 4-1 there would be some pre-teens or tweens who think that they're god's gift to the world making some really stupid joke.

OK I hate April Fool's Day. With the exception of what ThinkGeek.Com does with it. Check this stuff out, all new items available today! 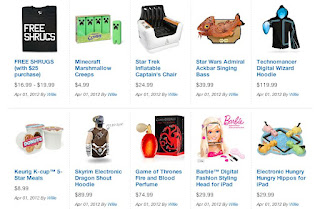 I can't help it, but I really want the inflatable Star Trek Captain's Chair. You never know with them either, in the past one or two of the joke items have actually become real items! Things like the Star Wars Tauntaun Sleeping bag come to mind.

IN any case, have a little fun today, but don't go overboard. Pranks are only fun if you're the one pranking.