Today is my birthday and the only thing I wanted this year was the Lego Ideas Doctor Who set, and fortunately I have a wonderful Mom who got it for me!  This is my second foray into Lego Ideas, I previously purchased the Ghostbusters Ecto-1 Set last year.  After that build I knew this one would be fairly complicated and nuanced, using techniques that standard Lego sets don't usually use.  Mostly though I was interested in the comparison between what Lego can do with the license versus what Character Building did with it.

See I was a huge collector of the Character Building Doctor Who Mini-Figure line.  Sure it wasn't expansive, but there were more than a few good sets.  I amassed a fairly large collection of the figures.  Yes, I was trying to get them all.  No I didn't succeed.


For some reason I really enjoyed the look of these figures, at least the faces anyway.  Not only did I go for their Doctor Who line, but I tried to get anything they did, figuring that if I ever did want to do dio stories, and that included their Tardis set.  That set was just the box itself with no interior.  Now CB MADE at least one set of the interior, and it was huge and hugely expensive.  I enjoyed what CB did with the line, would I enjoy what Lego is going to do?  Let's find out.

Yes, I suppose that's the official title.  It's not called "Tardis Control Room" on the box. 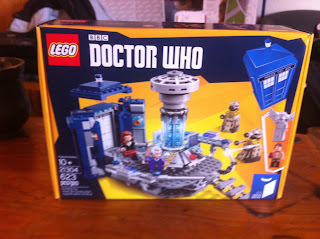 Packaging: 5 of 5
It's a beautiful study box.  Unlike most other Lego sets, the Idea boxes are meant to last.  The front shows the entire contents of the set in action, the back has a couple of good close ups and the Mini-Figure lineup.

I suppose I'd rather they actually photograph the physical item rather than using a computer generated image, but what can you do?

Surprisingly this box isn't all that big.  For 623 pieces you'd think it would be bigger.  The other IDEAS boxes are rather small also.

Instructions 5 of 5
I'm not sure what more you could want.  You get a nice perfect bound book with easy to follow instructions, and background information on not only the show, but the designers of the set as well.  Plus it's in three languages.

Construction 4.5 of 5
No I'm not giving it a perfect score, it's a pretty darn fun build that took two hours to put together, and that was with only minimal help from my munchkin.  There's just something a bit off about this set, not much off, just a bit.  Maybe the lack of walls?  Or the lack of "play features".  On a set this size and this many pieces, for example the Lego Elves Treetop Hideaway (that my daughter also got from my Mom) has over 100 fewer pieces and no less than 3 action gimmicks. 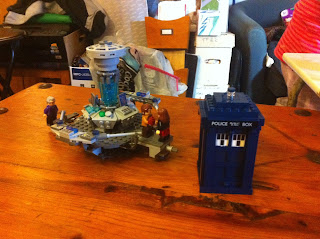 Decorations 5 of 5
There's a nice mix of existing printed tiles and brand ew unique tiles to make any AFOL happy.  Did I mention there's no stickers?  That's quite nice.  My only quibble is that the "Police Box" tiles are separated, has to be that way for at least two of the sides due to it's construction.  There's even a couple of tiles with Galifreyan writing.    No stickers is such a key though.

I know right?  How can you go wrong with Lego Doctor Who figures?  Well, quite simply I'm not overly fond of the brick built Daleks.  Also I think the characters are just a bit too generic.  As in they're not easily identifiable as Doctor Who.  Heck the Clara figure looks just like any other female figure from any of their licensed lines.  I do like the Weeping Angel though.  The two sonic-screwdrivers you get are really nice as well.  Better than the CB versions.

Speaking of which, I thought I'd take comparison pis of each of the figures included in the Lego set and their CB counterparts.  Lego are consistently smaller, except for their Daleks.  Best of both worlds I suppose, since I'll be using my CB Daleks on display instead of the Brick Built ones.

Price 3 of 5
Yup, I'm dinging this set for the price.  At an MSRP of $60 this set comes in at 9.6 cents a piece, which is usually a pretty good price, until you realize that a ton of the pieces in this set are single studs.  Lego is expensive, we get it.  I'm just fortunate that I have a loving mother who will still buy her middle-aged son toys.  A couple of years ago she got me a Superman Lego set that I adore as well.

Overall 5 of 5
And still it's a great set and I'm happy to have it.  I'm overjoyed to have it, and now all I need to complete my Lego Doctor Who collection are the two Dimensions sets.  Of course I don't have a crack machine to play the game on, so oh well. I just want the models. 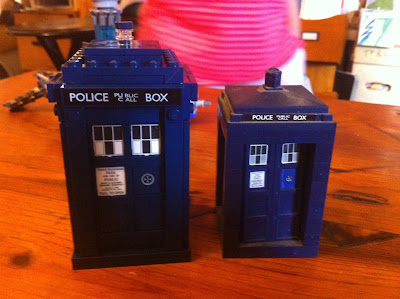 If you're wondering, the Tardis box itself is much much larger than the old CB version.
The CB version measured 6x6x9, while the Lego is 7x7x14.  It also feels much heftier.  Unfortunately though the door doesn't open, instead the box splits in the rear in order to connect to the larger model.