This is getting redonkulous

Just got this from Upper Deck:

Prehistoric bones and teeth will be cut, embedded on cards and inserted into 2008-09 Champ’s Hockey 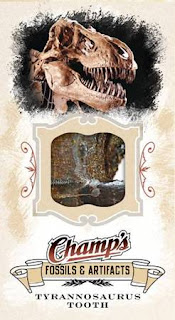 North Las Vegas, NV (January 13, 2009) – When Upper Deck started receiving in rare dinosaur bones and teeth to its offices in late 2008, there was a buzz in the air as many staffers gathered around to see these rare artifacts up close. Upper Deck dug deep to procure a variety of bones from ancient dinosaurs for inclusion in its upcoming 2008-09 Champ’s Hockey set.

These unique finds are currently being cut so they can be embedded onto trading cards in the set. The larger bones from creatures like the Woolly Mammoth and Woolly Rhinoceros will likely yield enough bones to make at least 100 cards, but cards that feature teeth will be much rarer.

“We didn’t want to ruin the feeling that you were actually getting a tooth by cutting them up too much,” said Matt Bromley, Upper Deck’s associate hockey brand manager. “But they were too thick to just include them whole. We moved ahead with cutting them vertically in half so now there will be two copies for each of these unique cards.”

Collectors may find tooth cards of ancient dinosaurs like the Spinosaurus, Pterosaur and the Tyrannosaurus Rex in 2008-09 Champ’s Hockey.

“The 2008-09 Champ’s Hockey product is a perfect vessel to deliver something truly unique like this to the hobby,” said Josh Zusman, Upper Deck hockey brand manager. “When we saw these pieces coming in, everybody was in awe. The inclusion of these cards in this hockey release helps bring the Ice Age to the ice.”

Collectors can sink their teeth into 2008-09 Champ’s Hockey when it hits shelves in mid-March.

First off, what do dino bones have to do with Hockey at all? I love that line "bring the Ice Age to the ice" but seriously UD, what's the motivation behind this? You couldn't create a cheap dinosaur non-sports card set and pepper that with relics? Kids would eat that shit up, I know, I was just at a dinosaur museum in Utah (the largest in North America), kids frickken LOVE dinosaurs. How hard could a dinosaur non-sports set have been to create? Paying artists for original paintings of dinosaurs can't be more expensive than paying Albert Puljols $200 for a single autograph. Heck, there's a new Ice Age movie coming out this year, you couldn't license that and put these in a dinosaur non-sports set?

Memo to Upper Deck - sports collectors don't want non-sports stuff mixed in with their sports sets. Get a clue. The rock stars in various sets haven't worked so far, the Presidential cards in this year's product left a lot of collectors cold (though not me, I loved them), and other than Allen & Ginter, there isn't a sports card product on the market place where dinosaur relics would truly fit the theme, and you can't go creating one just to make it fit.

I also kind of have a problem with them cutting up the bones in the first place. These are bonafide fossils (supposedly), don't you think they could go to some other educational or scientific purpose first before being whored out in trading cards?

All I can say to UD at this point is, SHAME on you.

Here's the pics I got sent too. 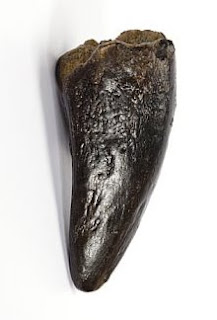 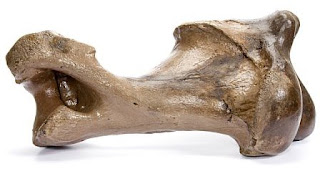 Posted by William Noetling at 12:22 PM

I have a bone to pick with Upper Deck. But seriously, what's next celebrity dentures?

This is the only hockey product I am looking forward to this year. Its the only 'new' product that has caught my eye in a long time. Even if it is just a blatant ripoff of Topps A&G.

Thank god that Geo. Washington's teeth are in the Smithsonian - aren't they?

I can think of a few worse relics...they saved Napoleon Bonaparte's manhood.