I have a confession to make, it's a minor one, and it probably won't affect anyone's life in particular, but I have to get it off my chest. Quite a few sports card bloggers have experienced a lull in their collecting habits one way or another, for example, Mario over at Wax Heaven left the hobby for a long time and then came back a few years ago and started his wonderful blog. Lots of bloggers are the same way. At one point I claimed the same, that I had left the hobby and was now back to it. That's not entirely true.

Whew, that's a load off.

Seriously though, it's true. I started collecting Baseball Cards round about 1977 when my dad, who was delivering the LA Times in early mornings, would buy me some Topps packs at the doughnut shop where he got his morning coffee. I got my first box of Topps in 1981 and was bitten from then on. I dropped Baseball about 1989 after Pro Set Football was released, and I was bitten by that particular set (I'm still ONE card shy of a master set, the darn Santa Claus Card). From 1989 to 1998 I collected Football almost exclusively. During the mid 80's I dabbled in Hockey Cards, but not too extensively (remember this was the era of Topps and OPC ONLY), and expanded that in the mid-90's, only to give up on all sports cards in 1998 for a time. I started back up with Hockey once the Kings moved to Staples Center, and collected Hockey exclusively for a couple years. Then it was no sports until the 2006 Baseball season and I bought a team set of Angels at the Team store at Anaheim stadium. From then on I was back into Baseball full force. I dumped Hockey during the lockout and haven't gone back, since the Kings haven't been in contention, and the product that's on the ice hasn't been worth supporting until lately.

Even during lulls in sports cards, I was buying non-sports and trading card games. I'm a pack busting junkie, I still get a thrill opening up a brand new pack of cards, even if it's dashed seconds later. When I haven't been buying sports cards I usually keep up on the latest trends, because I don't want to miss out on something really interesting. Fortunately since the advent of relics and auto chases I haven't really missed a whole lot. Rip cards don't interest me in the slightest, and redemptions are hit and miss now. I'm a sucker for "added value", so when there's a redemption program (like the wrapper redemptions now only seen at large card shows or All-Star Fan Fests) I'm all over it like white on rice. That's one of the things I liked about WizKid's Pirates game, there was a wrapper redemption with virtually every set, and I dig stuff like that. I really enjoyed Upper Deck's original Predictor program where you could get a special foil version of a card if your player did whatever the card said during a specific game.

So now that I've confessed all that, here's the "firsts" portion of the post. 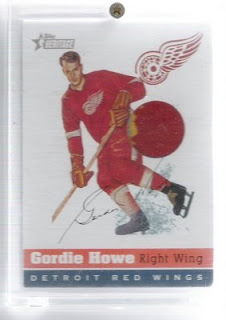 This is the first relic card that I ever pulled, coming from 2001 Topps Heritage Hockey, and a retail pack at that (I bought the pack at a 7-11 while getting a bottle of wine for my then-girlfriend). Honestly, I don't care what it books for, I'm not getting rid of it. I honestly can't figure out what it's a relic of either, could be a piece of the boards, could be a piece of stick, I have no clue. All I know is that it's a Gordie Howe, and it's beautiful.


I have some peculiar habits and routines, probably because I have a slight case of OCD. One is that whenever I got a specific K-Mart in Los Angeles, I always go over to the newsstand in the same strip mall and buy a lottery scratcher and a pack of cards. For some reason the newsstand is a "Diamond Dealer" of Upper Decks, and they actually carry hobby packs at a reasonable price. Sure there aren't THAT many choices, but I've had good luck there. Just last week I bought a pack of Upper Deck Basketball and pulled a Shaq jersey. Yesterday I went to K-Mart looking for any left-over after-Christmas clearance merchandise, I found a single pack of Topps Heritage for 30 cents, but that yielded a bunch of commons and a single black back. The only baseball packs they had left were Upper Deck Series 2, which I no longer need to bust, and Topps Co-Signers. Since I've only bought one other pack of that product, I figured, why not? I didn't even complain that the clerk picked out the pack. I pulled this beaut: 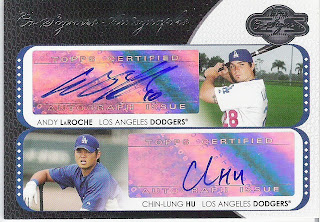 Most baseball fans in the city of Angels would be ecstatic about that card, but I LOATHE the Dodgers. It hasn't always been that way, I loved them during the Lasorda/O'Malley years, but the current ownership leaves me very, very cold (same way I feel about the Spanos family and the Chargers, only I've had personal dealings with them that left me feeling very upset with them). The "parking lot attendant" as Frank McCourt is known in the paper here, is a money grubbing scumbucket who hasn't done a thing to make the Dodgers competitive in a very competitive market. Say what you want about the Angels, that they're boring to watch, that they never make the big deal to get the big bat, etc., but you can't say that Arte Moreno hasn't been a pillar in the community and opened up the fan base to heights it's never seen before, even when the old cowboy owned the team. Oh and since he's owned the team, it's like doubled in value.

Ah well, it's still the FIRST double-signed card I've ever pulled. I'd be happy to trade it for something really cool, like a multiple signed Angels card, or something from one of the UCLA Bruins in the NBA right now (Kevin Love, Russell Westbrook, Arron Affalo or Jordan Farmar preferred). I know there's Dodger fans out there, I've traded with some before, I just can't remember who they are at the moment.

I'm also intending to sort through all my recent purchases and repost both my set needs and my have to trade aways. Soon.

Plus I'm going to Disneyland this weekend and getting annual passes, so if you're a Disney fan and want me to look for something for you, lemme know.

Posted by William Noetling at 10:57 AM

I would love to pull a card like that when I was buying a bottle of wine at 7-11.