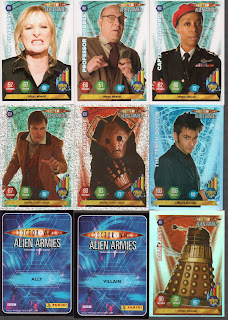 There I was at the Barnes & Noble, trying to get my daughter to calm down after seeing so many books that she absolutely had to have. After choosing "Max's ABC's" by Rosemary Wells I wandered over to the magazine stands to look at the newest issues of various things. I always tend to look at the toy mags just to see high res pictures of toys I'll never be able to afford, but this time I migrated right back to the film & TV section where Doctor Who Magazine was lurking, waiting for me to spot it, which wasn't easy as it wasn't faced and all I could see of it was the wrapper and the banner heading "Four Free Packs..." peaking above the other mags in the rack. I greedily snatched the magazine and discovered yes, FOUR free packs of the new Doctor Who Alien Armies TCG were included, along with a special foil 10th Doctor Limited Edition. I didn't even hesitate for a moment, knowing our bank account is tiny and that I have about a dozen card packages to send out, because I've been a good boy lately, eschewing all forms of instant gratification that wasn't a lottery scratcher over the last several weeks.

IN fact the ONLY splurge that I've managed to get my wife to agree to lately was the Target deluxe Star Trek DVD that came with a model of the new Enterprise that holds the DVDs in the saucer section. I can't even remember the last pack of Baseball cards that I purchased (oh wait, yes I can, a 99 cent 2009 Topps cello with Torii Hunter on the front, mostly for the gum). We're so strapped for cash at the moment that yes, the budget collector has absolutely no budget. Though my collector genes have been satisfied by receiving so many cool packs of Angels cards in the mail, and even though I've been selling comics on evilBay, those funds have been diverted right back into the household to appease my aforementioned wife. 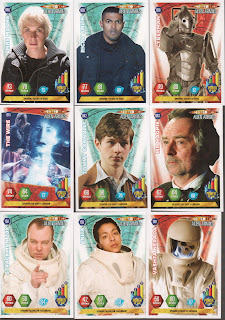 So now I'm totally hooked on these new Dr. Who cards, and I think you'll see why. While I'm not a "new" Whovian, as I used to watch the old shows during the 70's and 80's, I didn't become a full-on Who junkie until BBC Wales revived the series with Christoper Eccleston as the 9th Doctor, and even then I didn't watch the first season of the revival until it was already in it's third season. As a full-on Sci-Fi junkie I've always been aware of Who and had nominal feelings about the show, but was more hooked by shows like Blake's Seven, the Michael Praed Robin Hood and the comedies Black Adder and Red Dwarf. British television programming has always been better quality than our yankee counterparts, and as many know some of our best Sit-coms had their origins as BBC shows (I'm thinking of Sanford and Son and Three's Company here).

Just this weekend I printed out the Tardis Paper-Craft from Iron Cow Productions (hint, click the link you'll be taken right there), and I actually put the damn thing together this weekend with my meager paper craft skills. (Note to self: Next time print it on matte photo paper or card stock.) While I would LOVE to amass a huge collection of Character Options five inch figures, they aren't the right size for me anymore (I'm exclusively collecting 3 3/4" figures now, so while I COULD techically get a CHristopher Eccleston Doctor figure, I can't afford it as it's a San Diego Comic Con Exclusive GI Joe Destro 2-pack).

All of this is to say that I love Dr. Who and can't afford or find Who universe collectibles out here on the West Coast much anymore. There's so much cool stuff availble in the UK, including several series of Top Trumps cards (a more complicated version of War), Battles in Time cards (an even MORE complicated version of War), and even a collectible miniatures game, NONE of which typically gets imported to the US at a reasonable price. Toys R Us is now selling SOME of the Character Options figures, and even has a US Exclusive of the 6th Doctor in the 5th Doctor's clothing right after regeneration.

Boy this post is rambling. I've been waiting for the computer to install the scanner software as I wiped the hard drive on this baby the other day and had forgotten to reinstall certain key pieces of software.

SO now that is done, and here's what I have to show off: 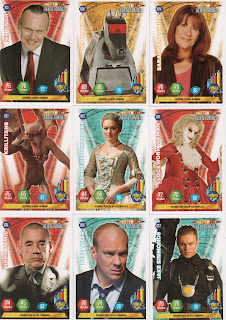 The set is actually reasonably priced if you're in the UK. Packs of 6 cards are only 50 pence, which is about 85 cents! A starter deck with play mat is 4 pounds 99 pence, or about $8.50. There's also a binder and tins, all of which include limited-edition foil cards available only in certain stores in the UK. Chase cards are inserted at VERY reasonable levels, from 1:2 to 1:8 and boxes have 100 packs in them. Wow.

So I suppose that if i want to really collect this set I'll have to purchase off of eBay, which isn't going to happen, or hope that some mad collector in the UK wants to help out.

The fronts are very clean in design, though the game aspect (which again looks to me like a complicated version of "War") forces designers to clutter up the photo with strange icons and numbers. The backs are generic in scope, with only the card type being different (there's Equipment, Ally, Villain, Doctor and "Children in Time" cards). The old logos are being used for this set, which is fine by me, as I'm not sold on the new DW logo yet.

This first set focuses ALMOST exclusively on the 10th Doctor (David Tennant) and his run from the last three or so years. The most recent specials aren't featured at all, but virtually every other episode and character are. The foil-embossed set features cards of ALL of the incarnations of the Doctor himself, and companions/villains.

I have no idea how to play the stinking game though, as no rules were inserted in my magazine (as they usually are for an introduction product like this), and there's NOTHING online that says how to play. Sadly. And believe me, I've looked today. So far I've probably spent a good two hours researching this product from Panini UK.

I seriously doubt this set will ever see release on this side of the pond, but you never know. I'll be calling Panini America in Texas tomorrow to find out for sure.

In the mean time if you want some for yourself, go to a good book store that has a good magazine section, and look for Doctor Who Magazine #414. It's $8.99 for a copy, but it's well worth it, as the foil 10th Doctor card is ONLY found in that mag.

And if you have extras of this and want to trade for something else (as I have NO dupes yet) I'd love to hear from you.
Posted by William Noetling at 4:31 PM

Howdy Hugh - couldn't tell you where the 20 LE cards came from, probably from another article on the subject, if only 6 have shown up, then that's all there is. The LE that I have came in the magazine, and it's in the first picture of the article, second row down, on the right side. It is indeed labeled "Limited Edition" and it is not the same card as E10.

I should have taken more notice of the pictures! That is indeed the Limited Edition 10th. Doctor that came with DHM that was released in the UK - I thought Panini maybe pulling a fast-one and had perhaps given away a different card in the USA? Phew! Had me worried there - I thought I might have to chase after a card I didn't have.