From the Los Angeles Times:
by Sam Farmer 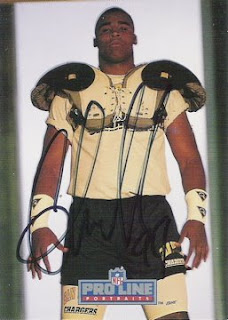 Police said there was no evidence of foul play. The coroner's office did not give an immediate cause of death, pending an autopsy and toxicology report.

A first-round draft pick of the Chargers in 1992, Mims was a standout at Dorsey High and in junior college at Pierce, Harbor and Southwest before transferring to Tennessee.

He showed a lot of promise early in his career, collecting 11 sacks in the 1994 season when San Diego won the AFC championship and played San Francisco in the Super Bowl. He had just two sacks the next season, however, and ran afoul of coaches when he missed meetings and had several off-the-field problems. Among his legal troubles over the years were charges of assault, vandalism, and driving under the influence. 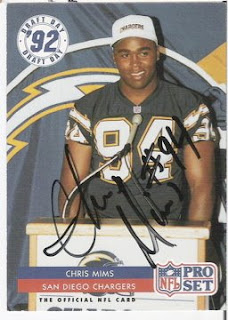 But some former San Diego players say Mims, who played at 300 pounds or heavier, was a well-liked member of the team.

"He was never a problem for the team," former Chargers linebacker Gary Plummer said. "He was just a happy-go-lucky guy. Coaches don't always like a defensive player who's jovial and laughing all the time. They want somebody who's going to go out and rip someone's head off. That wasn't Chris."

Mims spent five seasons with San Diego, then played one season for the Washington Redskins before returning to the Chargers for the 1998 and '99 seasons. His career ended in 2000, when he was cut in training camp by Chicago after missing a practice because he overslept. 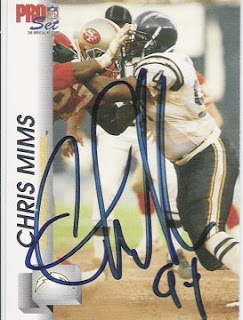 "When I first got [to San Diego] I was good for the situation. When I came back [in 1998] I wasn't good for the situation," he told the Chicago Tribune in 2000. "I don't think the coaching staff was comfortable with me and I wasn't with them. I wasn't mad; I was relieved. I was just sitting on the fence and waiting for something to knock me off."

The Associated Press contributed to this report.

It's odd when someone famous dies, at first one's reaction is shock and of course a lament that you'll never get to see that person perform again. However, when the famous person is someone that you have a personal connection to, it's a whole other story. Example: when Paul Newman died a few weeks ago I was shocked and sad that America had lost one of her best actors and a great humanitarian. That said, I never met Mr. Newman, I only followed his career from the time I could remember who he was (which let's face it, was probably only in the late 70's). Don't get me wrong, I love his films, especially The Hustler, Cool Hand Luke and Nobody's Fool, but the impact of his passing on my life is pretty small. 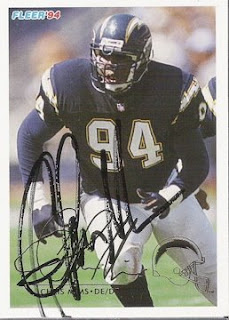 NOW, this afternoon as I'm feeding my daughter lunch I'm reading the Sports section of the L.A. Times and I'm actually jolted by the headline. Mims wasn't a good friend of mine, no, but he was someone that I had met on a number of occasions at training camp and he was one of the nicest players one could meet. Over the course of a couple years he signed no less than five trading cards of mine (four of which are scanned below) and we spoke about practice and how the Chargers were going to do that year. Mims was a stand up individual who had a stellar first couple of seasons and as the article above stated, got himself into some trouble and cut short his career after 8 years, but I'll remember those glorious early years when he was terrorizing the opposing quarterbacks.

So today let's mourn his passing and remember his play on the field. RIP Chris.
Posted by William Noetling at 2:22 PM

This is so odd. Last night I was going through boxes and boxes of baseball cards, sorting them. In the middle of everything there was one football card. I looked and said what's this? "Chris Mims, huh", I just put it back with the rest of the baseball cards and kept sorting.
I lived in San Diego in '94 and remember him playing and the excietment that came over the town when the went to the Super Bowl. This is sad news. He was a young guy still.

That is pretty strange. I lived in San Diego from 1980 to 1998, and yeah that town went apeshit in 94/95. I'll always remember the 1995 AFC Championship game against the Steelers because I was on a business trip to New York and had to watch the game in a New Rochelle sports bar where me and my colleagues were the only four Charger fans in the place!