If you recall, I lost a binder of cards, thankfully I found it this afternoon. It wasn't actually lost, I just put it in a different color binder and forgot about it. The binder was exactly where it should have been, next to my Chargers Autograph binder, which has a number of great cards from the 90's that I got personally autographed at Charger training camp from 1993 to 1997. Over the next few weeks I'll spotlight a those cards and players and share my experiences as an autograph hound. If this series goes well, I might even dig out my Hockey autographs from L.A. Kings training camps.

My first experience with NFL training camp was circa 1992 when I attended a Charger scrimmage at Mesa Community College where I was taking some classes at the time. You got to stand right next to the sidelines, and in one instance Rod Bernstine, Tight-End extraordinaire almost ran me over trying to catch a sideline pass. You really do not realize how big NFL players are until they almost run you over. While I was collecting cards at the time, I didn't realize that I could get them autographed at camp, until I saw quite a few other folks trying to get autos. Best part was, the players were all signing and being gracious about it as well. A buddy of mine suggested that I bring some cards, which I had, and I managed to get this 91 Pro Set issue signed by the head-coach Dan Henning. 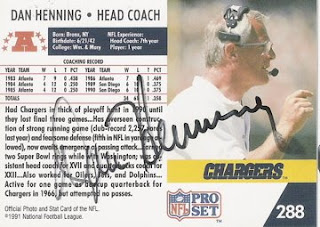 Henning wouldn't last much longer after I got this signed, but somehow I managed to meet the next coach, Bobby Ross at the next scrimmage and managed to get him to sign his 1992 Pro Set card. 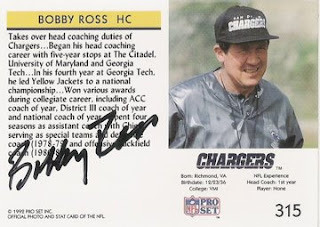 This nice thing about Pro Set was that they made cards for more players than any other company at the time, including the head-coaches. Unfortunately no one ever made cards for General Managers, which in all honesty isn't that surprising. Nevertheless after watching the Chargers practice at UCSD one day I ventured over to La Jolla Shores beach, where I happened to meet then GM Bobby Beathard. I recall that at the time there was a big controversy over one of the big players and whether or not he would sign (I THINK that it was Stan Humphries, and this was 1995 after he took them to the Super-Bowl, but my memory is fading). Beathard was extremely polite, after all I had just come from training camp and had binders full of autographed cards in my car, so he could tell I was a fan. I may have also been wearing my Chargers Super-Bowl Sweatshirt. He was kind enough to sign a Junior Seau card, because at the time I couldn't think of a better representative of the franchise. 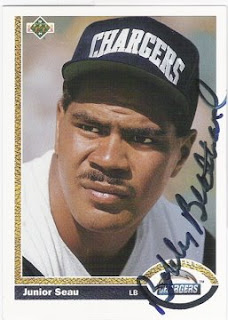 One other nice perk about camp was that they used to give out a ton of cool free items, as well as a roster-sheet that listed everyone at camp that day, by name and number. Most of the time invitees don't have their name on the back of their jerseys, so unless you have this sheet it's really difficult to tell who the players are. Here's one of the two that I still have, you'll notice in the top right corner it's numbered 9.1 - well, they put out separate sheets for each practice on two-a-days. 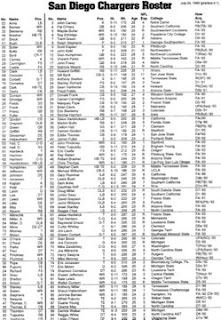 Well, even I know that a roster sheet isn't all that exciting, but what about oversized player cards? I'm pretty sure that these were a stadium giveaway that got left over, but it didn't matter to me, I was able to get a few signed, which was especially cool because these players really didn't have other issues, as they weren't necessarily first stringers. Check out the back on the Jefferson, they're all pretty much like that. They make great display pieces to be sure. 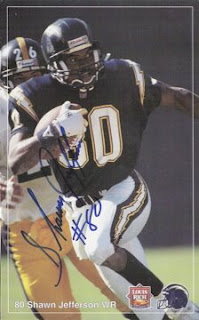 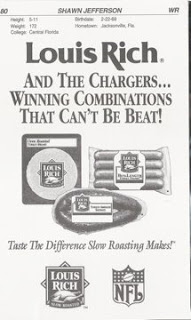 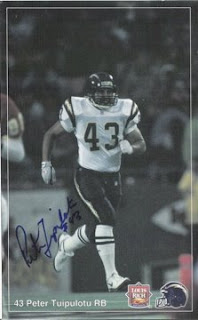 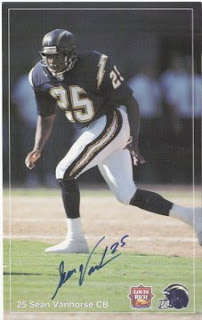 Then there are the magazines, each one was published by the Chargers and while they're kind of thin, they are packed full of good information and nice photos. 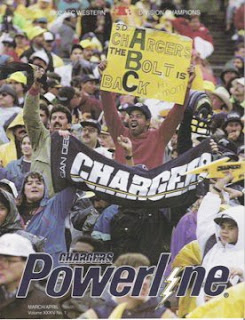 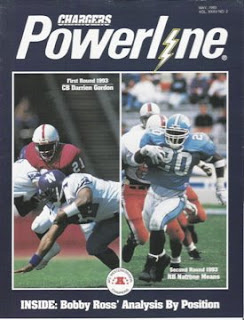 The May edition has a great article on the 1993 draft picks, and as I was flipping through it I noticed that I had gotten Darren Carrington's autograph inside. There's a story behind that autograph and the other one that I have of his, but that's for next time. 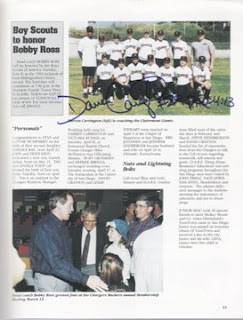 Halos vs. the Chowds - Round Two - FIGHT!

In a scant couple of hours we'll see the Angels hosting the Red Sox for Game Two, and as a die-hard Halo fan, I'm seriously hoping that history changes tonight and we tie up the series at one win apiece. I'll be making a tray of enchiladas tonight in honor of Arte Moreno and the Angels.

I've got a ton of things on tap this weekend and celebrations galore. Tomorrow my wife and I celebrate our fifth wedding anniversary, and then Sunday is our daughter's second birthday, and we are throwing a party in her honor.
Posted by William Noetling at 3:09 PM