Custom Cards on a Budget

Readers, have you ever want to make your own custom trading cards? Well, you can on the web in a number of places. Both Topps and Upper Deck have programs on their sites that let you upload your own images and create your own text. Problem is that they tend to be not on the cheap side. Upper Deck's program "My Own Trading Cards" program is currently being updated, which is good because the previous iteration of the program had only a few uninspiring designs, none of which were actually based on real Upper Deck cards.

Topps actually offers quite a few designs, including classic set designs like '59, '72, '74, '75, '76, '77, '87, '07 and '08, as well as a couple of nifty insert types AND Wacky Packages templates. Not only do they have nicer templates, but they also offer a number of different color selections within each template so you can really customize your cards. You also get to include as much information as you can fit on the back of a card, if you have a little-leaguer you can put his or her actual stats, or you can make up your own. The pricing is not great though, the most expensive package is the 5 cards for $10 deal, and the cheapest is 1000 cards for $420, so it ranges from 42 cents to $2 per card depending on your quantity. The cards are supposed to be printed on the same presses as their retail cards. At some point I'd love to order cards of my daughter once a year so that I have a complete set!

There are, of course, many many other companies that will do pretty much the same thing, and most of them have really nice templates, though you can only get official designs from Topps and UD. The nice thing about third-party presses is that the pricing won't be quite as steep, you're looking at between 25 cents and $1.00 per card depending on quantity.

BUT this is the BUDGET Sports Card Collector, I wouldn't be doing my job very well if I didn't have a deal to tell you about. Nestle's Drumstick Ice Cream has been running a promotion all Summer, and it's still going on now that gets you 16 Custom Topps cards for the bargain price of $4.19 in shipping plus two product codes from Drumstick packages. Here's the real secret, YOU DO NOT HAVE TO BUY THE ICE CREAM - simply copy down the codes off of two packages in the store, and go to this site to start off your cards. 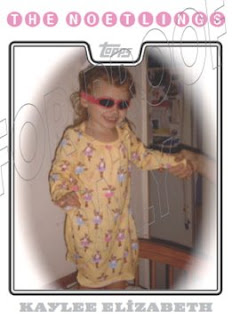 You don't get the same selection of cards, only the last three years' worth of designs, which actually has one design that's not available on their mainstream site (the 2006 design). The text options on the back isn't quite as good either, and you don't get to put on a card number like you do with the paid versions, but hey, they're a lot cheaper. I just ordered a set of cards of my daughter today, and here's the pics: 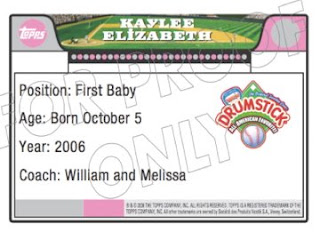 Personally I love custom trading cards, and I already have two of them of myself. One I made in 1992 at the All-Star Fantasy-Fest when the Baseball All-Star game was held at Jack Murphy Stadium in San Diego. They had a booth set up where you took a picture in front of a backdrop in your favorite team's uniform and they printed it on a trading card. These aren't the same stock as normal cards, and the photo isn't near the quality of a retail card, but they're still nice, and they were free. I got a second one done at the Hockey fan-fest when the Hockey All-Star game was held at Staples Center, and that's pictured below. I also got to touch and take a picture with the Stanley Cup that day, so it was all good. My biggest complaint is the back of the card, the stats are nowhere NEAR realistic, but again, it was free. 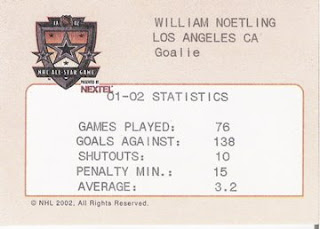 I love the fact that I played in 76 out of 80 games, but that 3.2 Goals Against has GOT to come down if my team is going anywhere...

So has anyone else ever had custom cards done? Got pics? 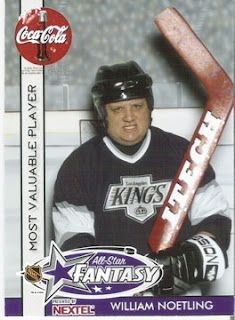 Posted by William Noetling at 3:30 PM

Good stuff. My son, six yrs old, is trying to convince my wife that we should make custom cards and use them for Christmas cards. I think he almost had her but the cards are too small. Now, if they came in cabinet or box loader size....

I believe that one or more of the third-party companies will do 5 x 7 versions of the cards, you'll just have to do a bit of research. As for cabinet cards, yeah I don't see those happening simply because they aren't a very popular and standard size of card. Heck I can't even remember the last set to have those types of cards.