It's only Saturday night, and thus far, my favorite teams have done pretty well this weekend. Last night the Los Angeles Kings won a tight game against the Hurricanes in OT on a great shot by Micheal Handzus with an assist by Alexander Frolov. The Kings won their second in a row and got back to .500, and they did it coming from behind. I've been slagging on the Kings now for several seasons because it just didn't seem like they had what it takes to be a contender, and they still might not this season, BUT they looked an awful lot better last night than against the Sharks those first two games of the season. 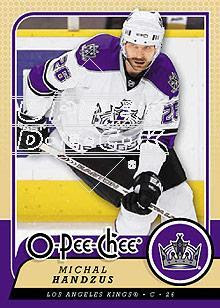 Might be time to dig out my Hockey card collection from storage. Yes, I used to collect Hockey cards as well, from about 1999 to roughly 2002 I was fairly hardcore with Hockey being my only sports collectable. At the time I was also collecting UDE's Versus game and WizKids Heroclix, as well as toys, so my collecting dollar was being spent all over the place. I've got a couple of 3200 count boxes in storage, that I'm thinking I should go grab one of these days, if nothing else to check my Kings collection and then get rid of everything else. I'm sure I've got some nice RCs in there, though I stopped collecting before Sid the Kid hit the sport.

Because DAMN, I really like that OPC card design, reminds me of some great 80's hockey cards.

UCLA squeaks out victory against the Cardinal 23-20

I started off listening to this game on the radio while I was coming back from the grocery store with my daughter. One thing I knew was going to happen did during the first quarter, Stanford broke their scoreless streak in the Rose Bowl which had been going since 2002. What I didn't know was going to happen was that Kevin Craft would play a phenomenal game yet again.

This was pretty much a "must-win" game for the Bruins, though honestly I think they're all must-wins at this point if they're going to make a bowl game, and even then, that's iffy. I had the chance to actually go to this game, and I turned down tickets because I couldn't convince the wife that sitting in the hot Pasadena sun for four hours on one of her two days off was a good use of her time. She spent the time making a Halloween costume for our daughter instead, and I can't really complain about that. (Click the link to see it).

At one point in the 2nd quarter the Bruins were down 14-3, but they never gave up and never lost sight of a victory. The half ended at 14-6 after Forbath's second field goal. Stanford opened the 3rd quarter with a long drive that ended with UCLA's Ward picking off a Pritchard pass on the Bruins 42. Craft took over on offense but went three plays for -11 yards and the Bruins punted. Fortunately the Cardinal fumbled and the Bruins took over at the Stanford 30. Six plays later the Bruins scored and the game was 14-13.

Forbath kicked a third FG at the start of the 4th quarter and the Bruins led 16-14. Stanford kicked FGs on consecutive possessions and it was 20-16 with about 2:23 remaining and the Bruins started on their own 13 yard line.

On the final series of the game the third-string QB went 6-8 for 60 yards and a TD, but get this, he had completions to FIVE different receivers. Oh and he rushed for a couple of yards too. In the end he was 23 out of 41 for 284 yards, 2 TDs and 1 pick. He did get sacked 7 times though for 44 yards lost, and that's never good, but with UCLA's offensive line being what it is, at least Craft is still healthy.

Unfortunately the Red Sox are leading the Rays 2-1 in the top of the 4th at the moment. This does not make me happy at all, because I feel like if the Sox win tonight they'll take the series tomorrow, and then who knows in the World Series. It scares me because IF the Sox make it to the Series, they'll probably go back-to-back, and I would just hate that. Yes, I hate the Sox officially, they've been added to my list of hated teams.

IN order of level of despisedness

Yeah, that's about it. I can't stand any of those teams. In fantasy sports I won't have anyone from those teams on my team. Seriously. Unless I'm collecting a full set, I'll trade those teams away faster than any other.

It's odd, I really want to see a Philadelphia/Tampa Bay World Series just because it would really, really upset Fox Sports. Here they were champing at the bit to air a Boston/Los Angeles matchup and piggyback on the ratings of the last NBA Championships, but NOOOOOOOO....the Phillies had to kill that dream. I'd also like to see the Rays win it all to be honest, I like Joe Maddon (ex-Angel) and they play just like the Halos should be playing.

The Bruins started practice yesterday, coach Howland choosing to eschew a "midnight madness" type of event, rather he made it a point of having a locked and serious practice saying this in the LA TImes: "There's not much time until the first game, I don't want to waste a practice." Okay, we getcha coach, you're serious about this stuff. Good, we are too. See in Westwood NOTHING is acceptable for our Men's BBall program except a National Championship. Sucks doesn't it? It's especially bad now that Howland has taken the Bruins to three straight final-fours and has three starters returning AND four freshmen pheonoms coming in. As much fun as I had last season following Kevin Love's one and done year, this year could be even better. Though improving on a 35-4 season is going to be difficult, I have no doubt that this is the year we hang #12
Posted by William Noetling at 6:03 PM

Wow, what year O-Pee-Chee is that? That is a sweet looking card. I am coming to regret not buying at least a blaster of O-Pee-Chee last year.

If you do dig up that box of old Hockey, I'll be glad to trade you Kings for Thrashers.

I believe that is this year's OPC from Upper Deck, which may be why it looks so darn nifty.

I will definitely go get my Hockey Cards within the next few weeks (after we pay our storage rent) and see what I can find for Thrashers cards. I know I've got quite a few.