The wait is over, the MLB Playoffs start today with a slate of three games. The Phillies are hosting the Brewers (no score, top of the 3rd as of this writing), the Dodgers are in Chicago taking on the Cubs in a couple hours, and then our Western Division Champions take on the hated Red Sox later tonight. The Chicago White Sox will play the Tampa Bay Rays beginning tomorrow.

The pennant races were actually pretty darn interesting this season, with more than one coming down to the last weekend of play. The White Sox actually had to play a make-up game with the Tigers on Monday due to a rainout earlier in the season. If they had lost that game the Twins would have automatically made it in. Since they won, the Sox and the Twins had to play a one-game playoff which was a great pitching duel won by a 7th inning Jim Thome homer.

All eight of the playoff teams deserve to be there, there's no sliding into the playoffs in MLB. What's interesting is that on the AL side, three of the four teams have won the World Series since 2002 (Halos in '02, Boston in '04 and '07 and Chicago in '05) that's four out of the last six World Series, which you have to think bodes well for which ever AL team wins out.

On the NL side, we're looking at a long time in between World Series victories. The Dodgers are actually the most recent of the three NL teams that have won the title, last winning in 1988. The Phillies have only won one World Series in their history, despite being in existence since 1883, and that title came way back in 1980. Their last WS appearance was in 1993 when Mitch Williams gave up that famous game-winning dinger to Joe Carter. The Brewers became the first team in MLB history to make the playoffs in both the AL and the NL, however, it's been a LONG time in between appearances for them; they made their one and only other playoff appearance in 1982, defeating the Halos in the ALDS and then losing to the Cardinals in the World Series. We all know that the Cubs have waited since 1908 for another WS title, and haven't even been to the big dance since the end of World War II! Yes, they've made the playoffs the last two seasons and three times total in the 21st Century, but they're still 100 years away from their last World Series victory.

Wow, I just checked out the MLB site, and apparently they're streaming each post-season game live as a part of TBS Hot Corner, but with four different camera feeds, one from the mound, one from the plate, one from the center field camera and one from the dugout. It's kind of difficult to figure out the action, but it's rather nifty. Here, check out a pic: 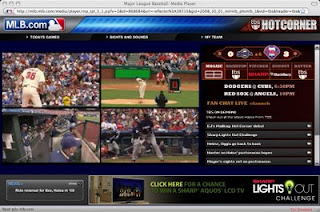 The "live" stream really isn't live either, it's about 30 seconds behind the the television feed, which is usually a couple of seconds behind the actual live action. There are no announcers on the audio either, just the sounds of the game itself, which is a mixed-bag in of itself, because you really can't tell what's going on in the game once the pitch is hit.

It's only available for the division series and the ALCS, so if you want to check it out, do so soon.

Interestingly enough, the playoff roster that I posited on September 17 became a reality on September 29, as Mike Sciosia must have read my blog and decided that I knew what was best for the Angels. Heh...as if. Seriously though, I suppose that I must be pretty dialed into the Angels lineup this season. I'm really glad that Jepsen made the post-season roster, despite only appearing in 8 games with 8 1/3rd innings pitched total. Of course the teams can change their rosters in between rounds, so who knows what the Skipper might do should the Angels advance. I did just now purchase Jepsen's 02 Bowman Chrome RC for $1.20 and $2.00 shipping.

I have sent out all packages owed to everyone, and I'm pretty sure I'm not expecting anything else. I still have nice packs of 40-50 cards INCLUDING super-stars, for pretty much every team in the bigs. If you want one or more of these, please email me at wmnoe at yahoo dot com and let's set something up.

I don't have anything of interest for sale at the moment, unless you like Harry Potter Chocolate Frog Cards, WWE Action Figures or The Simpsons Treehouse of Horror Figures.