I have no idea how long this sale is going for, they didn't do a thing for Black Friday on Kreo, and they ended their month long Buy One Get One 40% off this last Wednesday. 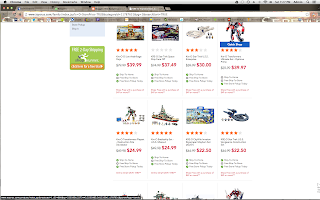 I have honestly lost track of how many Kreo sets I've purchased, I've got at least two from every line so far with the exception of their new "Cityville" sets, and the only reason I haven't pulled the trigger on those is that the mini-figs that come with them are teensy-tiny.  I may start getting them for my daughter though.

Kreo, if you don't know, is Hasbro's latest attempt to unseat the goliath Lego as the supreme building block maker.  Hasbro began with built-in licenses, focusing their first two lines on in-house properties Transformers and the ill-fated Battleship movie.  Most folks don't realize that the bricks and sets were supplied by Oxford Toys, a South Korean company that has done the Lego Clone thing for quite some time already.  Their military designs are really top notch, and it seemed like a good fit with the military-themed Battleship sets.

The lure for me for the Transformer line is the mini-figures or Kreons as they call them.  Kreons are slightly more posable than Legos, and they are also a bit wider.  For Autobots and Decepticons these figures work great and Hasbro has churned out dozens of different figures that come in bigger sets AND blind-packed figures.  There's at least 40+ figures available in "blind" bags (they really aren't blind, if you know the codes you can figure out which character is in each bag).  They don't double up the figures either, i.e. the blind bag figs are not in the larger sets.  They have also started doing "deluxe" figures which aren't blind bagged and come with a ton of accessories and a stand.

The main Transformer sets are "2 in 1" meaning you can create EITHER a huge brick built robot OR their Alternate mode, but neither actually transforms.  After initially building both modes on the smaller Autobot sets, I stopped building the robot mode all together.  The robots are really off model (except for the excellent heads) and look terrible.  Whereas the Alt-modes look FANTASTIC and are really hefty builds.  I'm especially fond of the biggest initial set, Optimus Prime (which I bought at ROSS for $25) because he not only has the cab, but he also has the iconic trailer which is big enough for a roller to fit in, but doesn't come with one.  He comes with five Kreons and two motorcycles.  I also really like the Starscream set because the Jet is a heavy F-15 like plane with a decent amount of armament and articulated sections.

Since Transformers is a wholly owned property GI Joe fans soon started clamoring for their own line of Kreo sets, and we were rewarded earlier this year with our own sub-line, albeit only available at Toys R Us.  Still, the GI Joe Kreos are awesome, though their line is not nearly as robust as the Transformers.  Two series of Blind-Bags and about a dozen sets are what we have so far, and a couple of those sets are straight "re-decos" of the Battleship line (the Helicopter that comes with Wild Bill has been done no less than three times in Kreo already).  I really hope the Joe line continues because there are some great sets that can still be made and I really want to finish my Original 13 figure set.

Now, after all of that you might think I would have gone back to one of my favorite properties when I popped into my local TRU today, but nope, I continued my collection of Star Trek Kreo sets today.  How and why Hasbro got the Star Trek Brick property I really don't know.  Star Trek and toys lately are very very hit and miss.  The toys that Diamond Select are making are great, but really only stocked at TRU and Comic book stores, and I wonder how well they're selling these days.  The Playmates line that was released with the 2009 JJ Abrams movie was poorly made and even more poorly received.  The 3" figure line (can't call them 3 and 3/4" because they weren't) was axed before the second wave was released, which not only denied collectors of a much better set of sculpts and figures, but also the ability to create the massive bridge set, as each figure came with a piece of the bridge and they were split up between the two series.  Inexplicably Playmates went with three sizes of figure lines, none of which sold well, and in fact can still be found on some store shelves nearly five years later.

The fact that there wasn't a massive toy line associated with the highly anticipated sequel wasn't that surprising given the utter failure of Playmates to exploit the property wisely, but as I said, Hasbro did license a few things from Paramount, and thus we got Abrams series Kreo sets.

There's two different sub-lines here, a smaller line of ships includes the Enterprise, the USS Kelvin and the Jellyfish from the first movie, and a Klingon Warbird that looks more like the TV series design than the Abramsverse designs.  These ships have an MSRP of $5.99 and are a quick build, much like Lego's Polybags or small sets, and while they don't have Kreons, they do have a light brick and that's pretty cool in of itself.  I already have the Enterprise and the Klingon ship.

The second and larger line is clearly focused on "Into Darkness" and includes the Enterprise, The USS Vengeance, a small Klingon Scout Ship, a Shuttle and two "scene" sets: the Airlock jump and a Transporter.  There's also a six figure blind bag set with totally non-essential figures (so much so that even though I know the codes, I haven't bought any yet, whereas I've bought dozens of Joes and Transformers already).  After the initial sets were released and fairly well received, TRU snagged themselves an exclusive "Star Fleet Face-Off" set which has the previously issued Enterprise AND a newly designed Klingon Warbird.  This set retails for $75 and comes with eight Kreons, Kirk, Spock and McCoy in new decos, Chekov and Sulu in Star Fleet Togs.  It also has two identical Klingons and a third different version.  THAT's the set that I purchased today and just finished building. 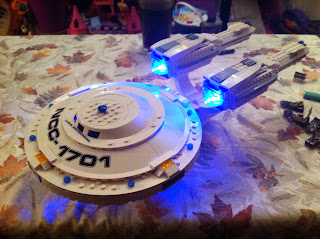 She's a doozy that's for sure.  The Enterprise is the real star, and she is HEFTY and well built.  I don't even think there's many greebles that can come off her.  While her hull is mostly one piece, there's enough building to make it fun for most kids and adults.  They say you can put the figures in the saucer section, which is detailed for five figures to sit, but you really can't seat them and put the lid back on.  No such problem with the Klingon ship, all three warriors fit perfectly. 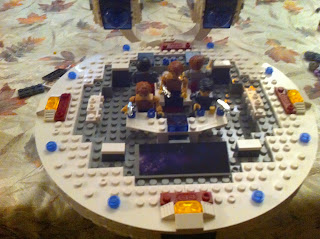 My only issue with the set was that my one unique Klingon has two left arms.  No biggie, I snagged a robot arm off one of my extra Transformer Kreons and now my Klingon has a bionic arm. 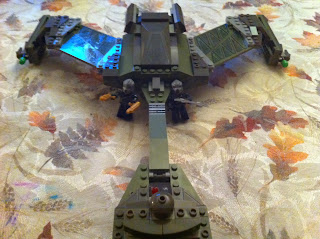 IN any event, if you're a GI Joe, Transformer or Star Trek fan and you enjoy Lego as well, check this sale out, it doesn't get much cheaper.  Though the early Transformer and Battleship sets can often be found at discount retailers like Ross, TJ Maxx and Tuesday Morning.  Even then you'll be paying just about 50% off the original retail price and these are older sets.  This sale is the same and they have all the new sets, including the Transformer Combiners and the new Deluxe Mini-Fig sets. 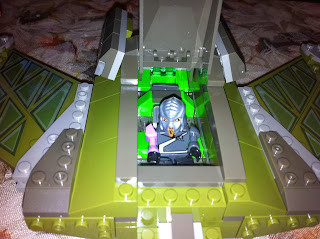 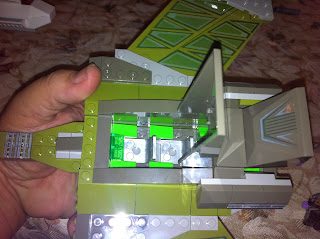 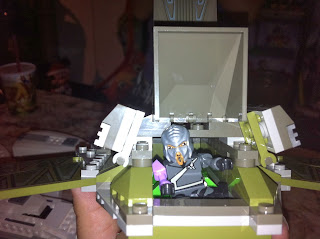 Posted by William Noetling at 8:11 PM No comments:

Ahh Heroclix, my old friend, you license a property that I love and I have to go back and purchase you.  You suck me right back in.

A little history - I collected Heroclix from the initial set through to about the 10th set overall.  I was able to pull great pieces and played in tournaments and for fun up until about the release of the Galactus big figure at Wizard World Long Beach in 2004.  After that fiasco I had a very bad taste in my mouth, and promptly switched to WizKids newest game Pirates, which let's face it, was far more interesting.

Almost a decade later, I found myself purchasing Heroclix again, why?  Because of Guillermo Del Toro's Pacific Rim.  This movie was what I'd been waiting to see for decades.  It contained virtually everything I wanted to see in a Giant Robot vs. Kaiju movie; believable giant robots, menacing kaiju who were even CALLED kaiju, bad acting, bad scripting, and fantastic special effects.  It was almost a perfect film for me.  No, it's not a great film, but it is a great MOVIE, and there's a big difference.

Of course I'd like to be writing this blog about the NECA Action Figure line, but unless you snapped up Series 1 at retail on the two days they were available at Toys R Us, you're paying close to $40 for each figure that originally retailed for about $16.   Instead I take the budget minded route and talk about the miniatures game from NECA, Heroclix.

NECA purchase the rights to Heroclix from Topps some years ago and revived the brand to where it's actually bigger than ever now.  Pacific Rim seemed like a no-brainer for a Clix product, but as of now it's just one set of 10 figures with a "mini-game" release.  The mini-game contains 2 clix, a nice but small game board, and a smattering of tokens, plus rudimentary rules that point you to the internet for the full rules.  Oh and some cheap dice.  This retails for about $12 - $15 if you can find it in  your local comic or game store.  I had to order mine off of HKToy.com, along with a 4 of the single piece gravity feed packs at $3.20 apiece.  The mini-game clix are exactly the same as the ones you get in the gravity feeds, so now after purchasing an additional 7 packs (at between $4 and $5 apiece) at a convention yesterday I have a total of THREE Gipsy Dangers, 2 Striker Eurekas, 2 Slatters, 2 Knifeheads and 2 Raijus.  I only need Leatherback and Crimson Typhoon to have a complete set of ten.

So I'm selling my duplicates on eBay.  here.  If you win one and tell me you saw this blog post in your notes I will refund 10% of your purchase price!


Posted by William Noetling at 12:01 PM No comments: