Crunchy roll has great deals every now and then, today's deal with about 12 hours left is a DVD set of Mobile Suit Gundam 00 Season 1.  This is 26 episodes of mecha goodness with some nifty extras.
You get 3 different sets each with 2 dvds and there's also manga included.  List price is about $120.  When you put the item in your cart it will show up as 3 different sets for $10 each, making it $30.  Shipping to California was $9.

Because I've been able to parlay a couple of nice pulls into PayPal money recently, I figured it was nigh-time to bring in some new cardboard under the auspices of the bay of E.  Basically that was a long winded way to say I sold some cards and bought some cards.

Here's what I got:


Upper Deck 2013-14 Series 2 - Young Guns Martin Jones and Linden Vey.  I paid $1.00 for both of these, what a steal right?  Naw, I had to pop $6 for shipping from Canada.  I checked though, his shipping only cost him $3.50 something.  Needless to say his star ratings on his shipping price was very low, and he took forever to ship too. 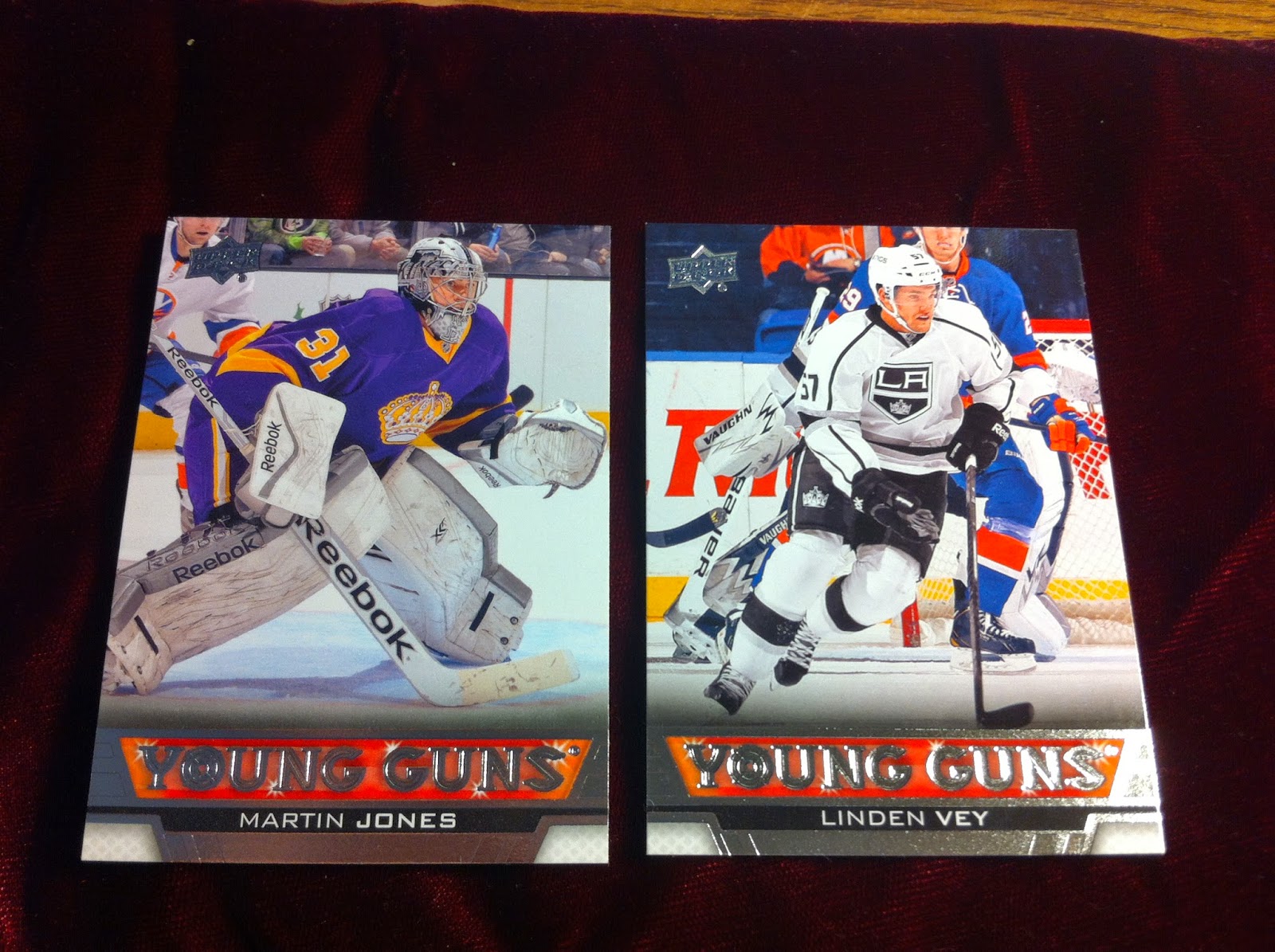 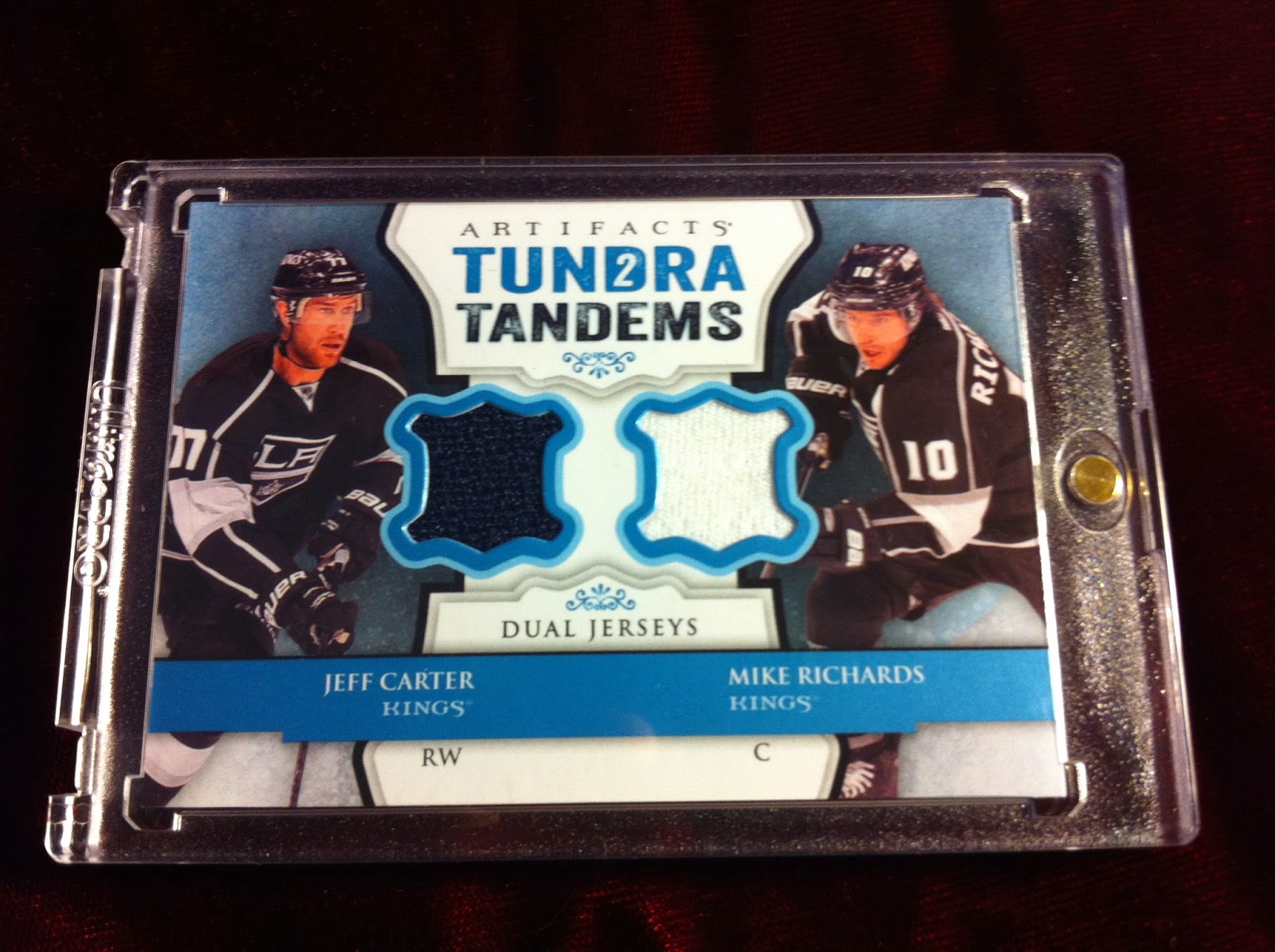 I got all of these from the same buyer, decent prices and I got combined shipping, but again I got ripped on the shipping.  It cost him only $3.30 to ship to me and he charged me two bucks extra.  Again didn't get good shipping star ratings.  Great cards though. 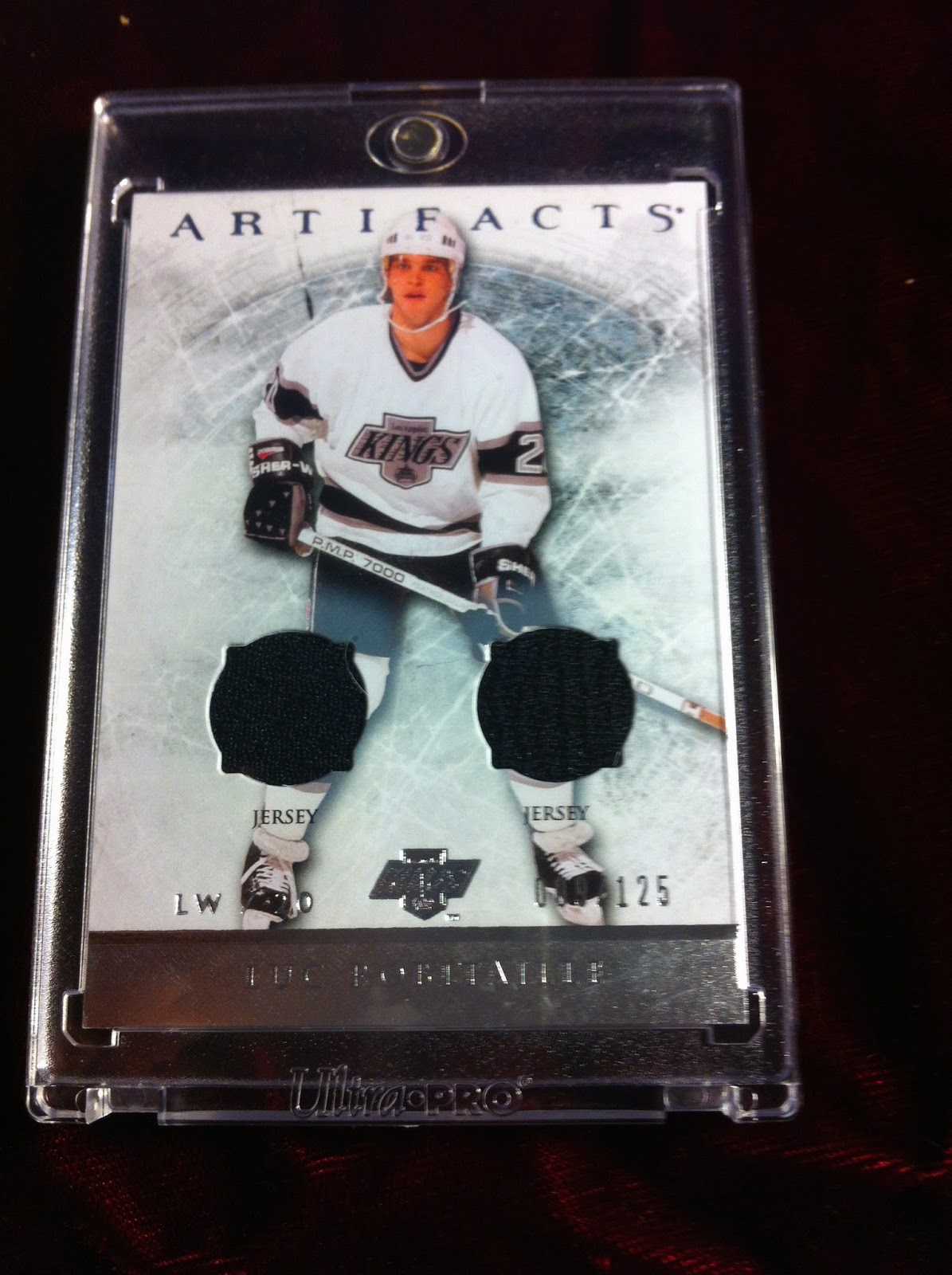 I don't know what it is about jersey cards, but I really dig 'em, always have.  I kind of hate the fact that they're so hard to pull, and so basically worthless, unless they're numbered to some ridiculous low number and signed.  See I really like these double cards with two players and two swatches.
Or One player with two swatches (numbered to some ridiculous low number) 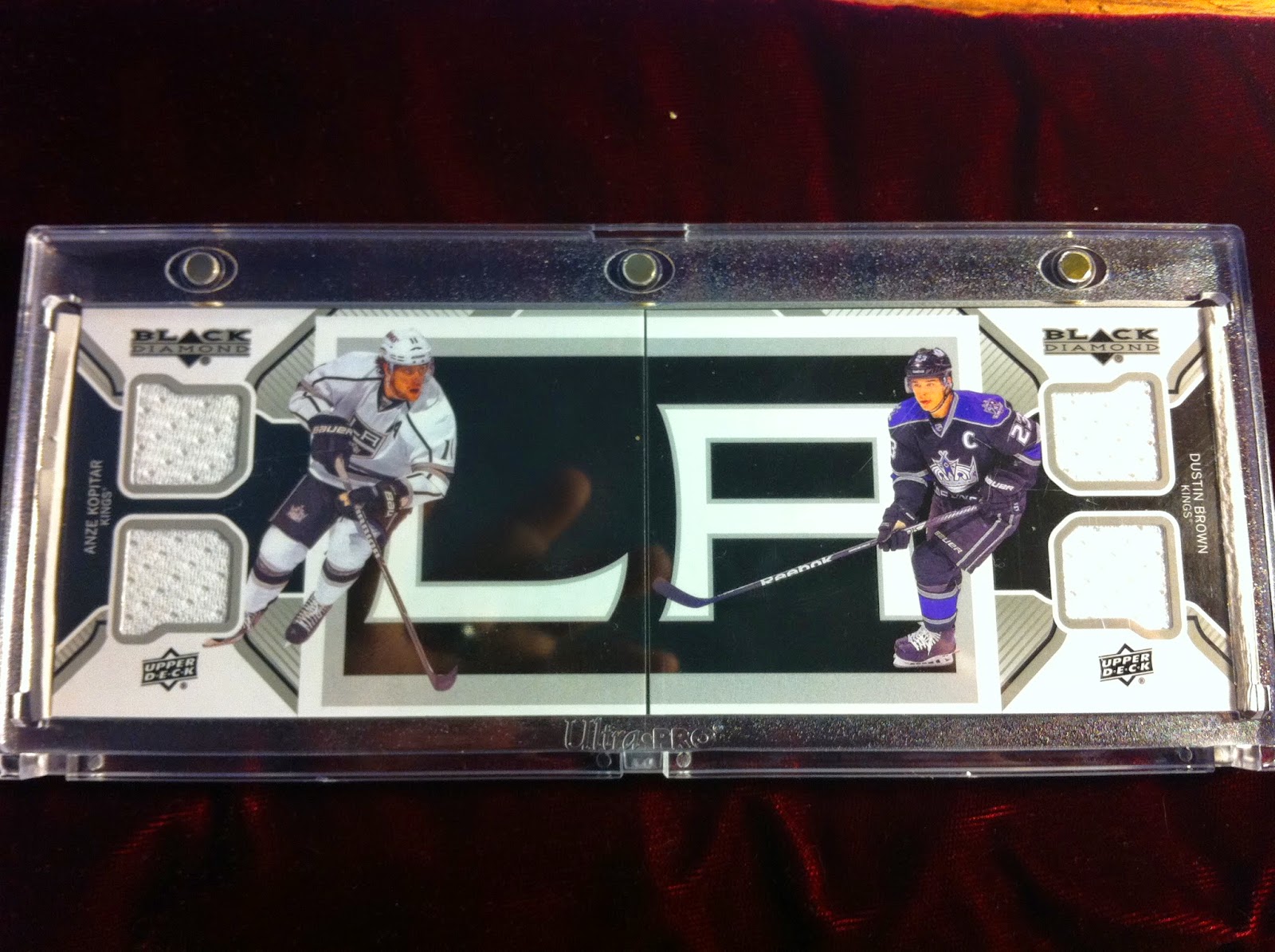 Or they're puzzle pieces!
I really dig these Black Diamond dual jerseys.  There's two more Kings in the set, Drew Doughty and Jonathan Quick and they have a different Kings Logo in the middle.  I'll need to be on the lookout.

These last few cards are from previous purchases 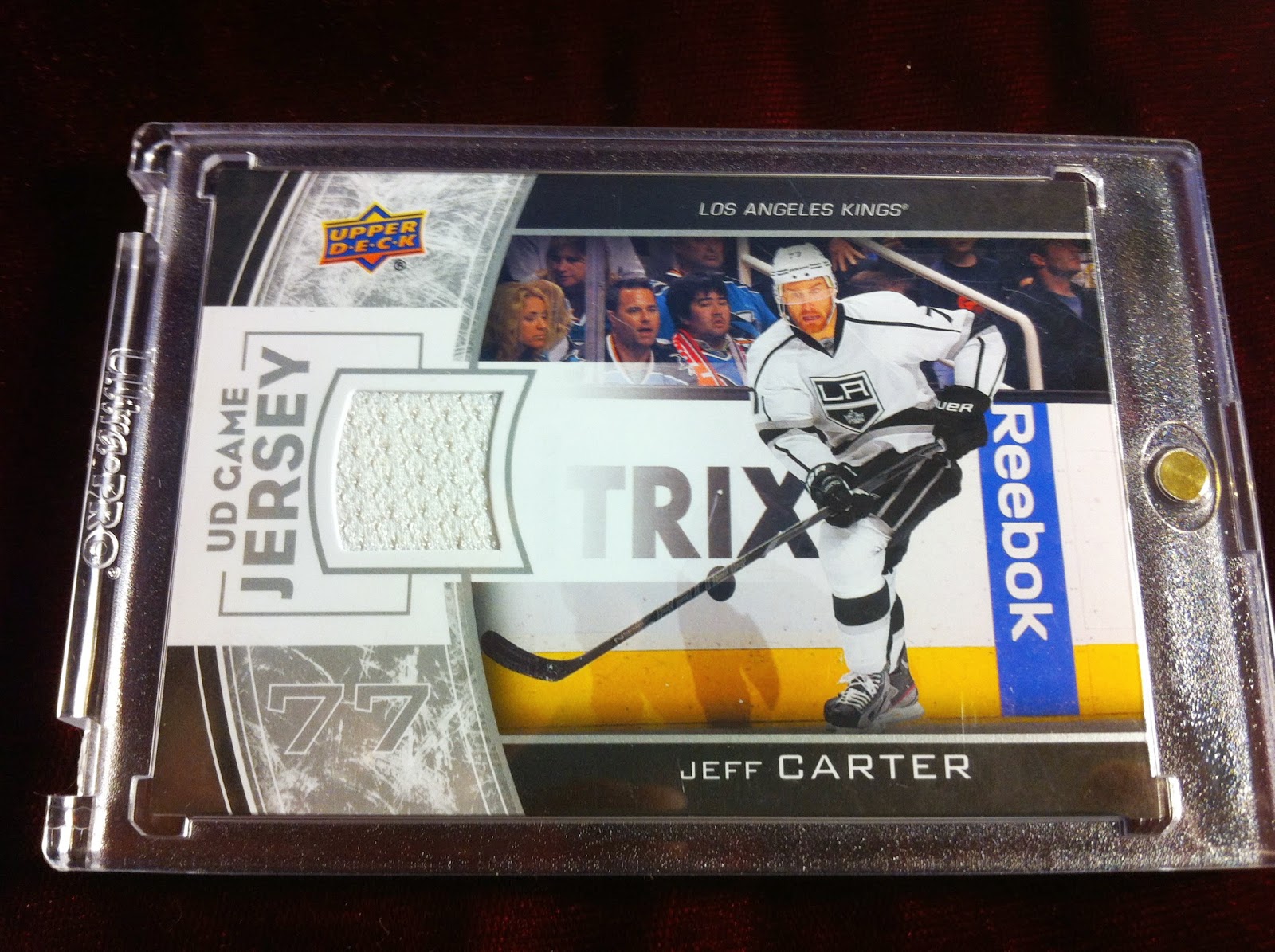 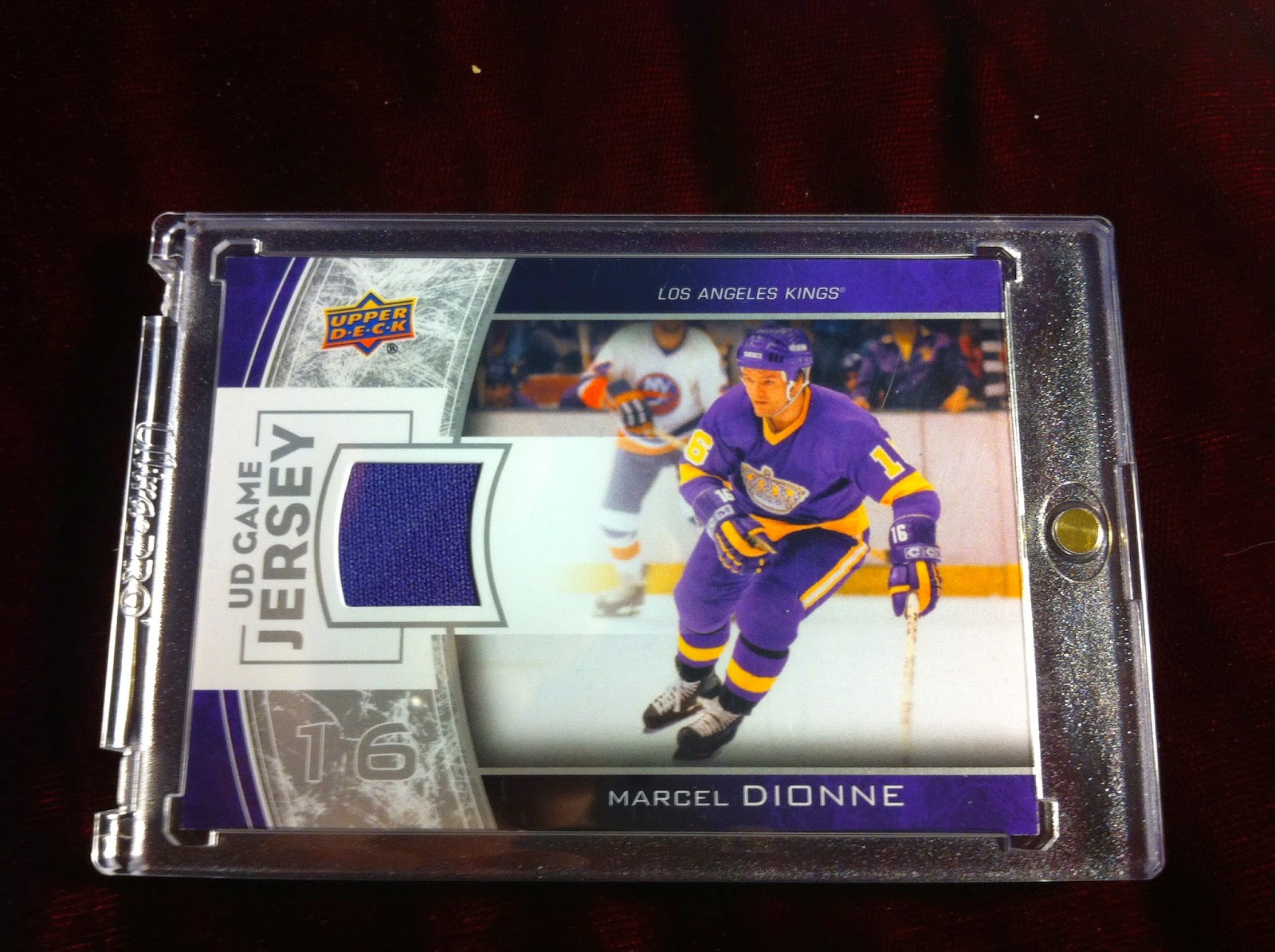 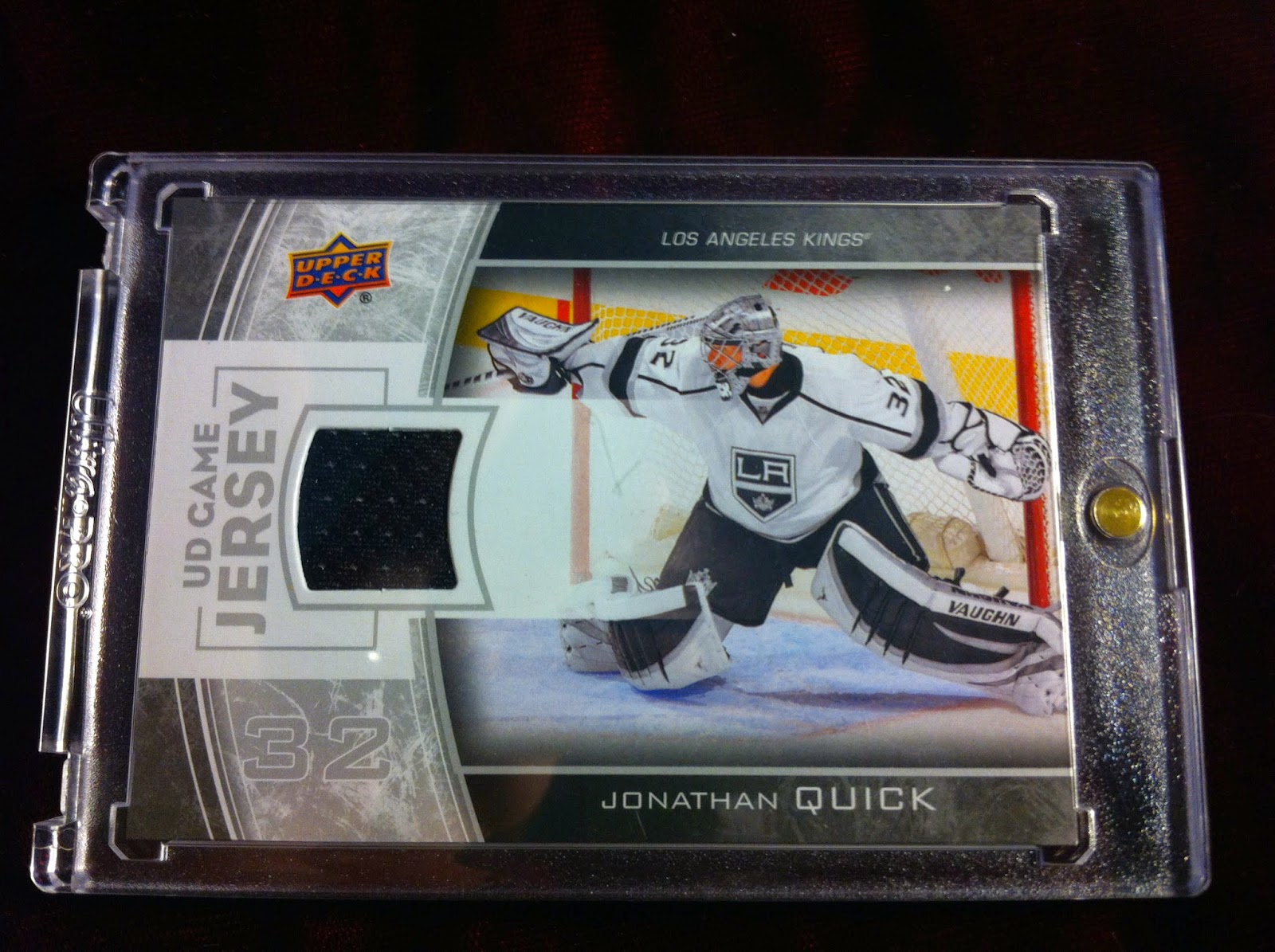 The top two I bought in previous auctions for less than a couple bucks each.  The Quickie I PULLED last week.  I do believe it is the first and only Kings memorabilia or limited card I've ever pulled.

There are ELEVEN Kings in the standard UD Game Jersey set this year, I checked because I figured I had three already, I might want to go for the full set.  Here's the rest of the set and their odds:

Now I've looked online, most of those single swatch jerseys are a couple bucks, shouldn't really be a problem, but that damn Gretzky is a short print.  There's only one on eBay right now and they want two hundy.  I ain't paying no two hundy for a single swatch jersey, I don't care how rare or who it is.  OK maybe if it was from Babe Ruth...or Joe Jackson.  Whatever.

Here's a card so nice I bought it twice 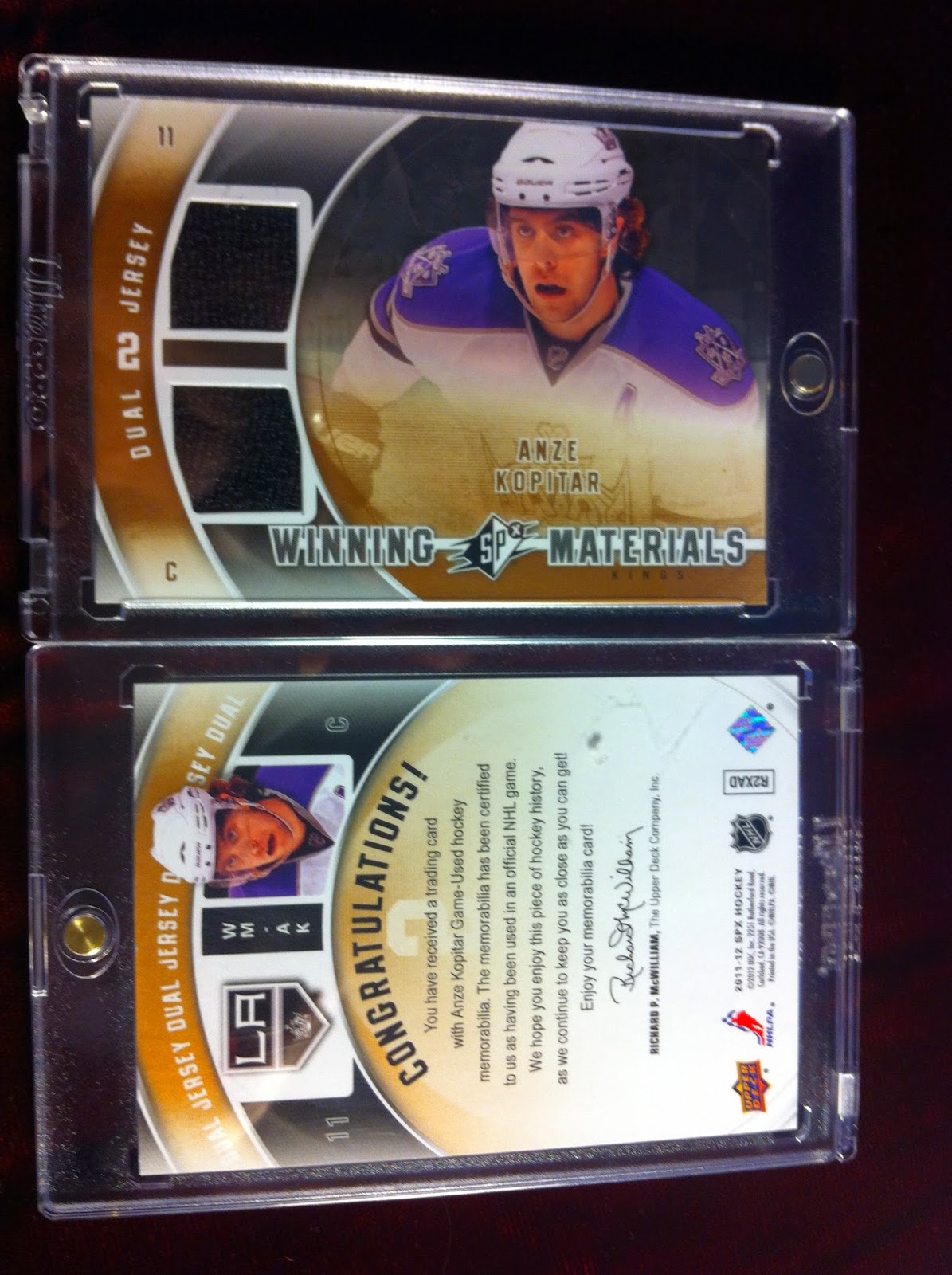 That's 2011-12 SPx and it's a 1:18 insert, so not really very rare I guess.  When I bought that one I inadvertently bought several duplicate cards.  It's never a bad thing to have dupes, especially of Kings.  Gives me something to trade.

Posted by William Noetling at 3:14 PM No comments:

I'll fully admit it, last week when the Kings lost to the Sharks in Overtime in Game 3 to go down 0-3 in the First round I wrote them off.  Oh I always expect the worst because well, when your expectations are so low you can only be surprised by a better outcome.  This was my father's world-view and I sort of adopted it as an adult.

Anyway, I still watched every other game in the series, except for Monday's when I was in a class, but I left early to catch the end of the third period.  These Kings, they might not be a team of destiny like the 2012 squad, but they certainly are exciting.  Bring on the Ducks!

Which, I might add, is a DREAM Playoff Matchup for this Kings fan.


I started collecting Hockey Cards again this season, mostly because of the dual Rookie Card class.  I've pulled some great RCs already this year, including these two beauts that I have gotten from my friendly LCS California Sports Cards - their Upper Deck Series 2 boxes have been very kind to me:


I currently have 124 cards on eBay right now, ALL WITH FREE SHIPPING.

AND BEFORE YOU COMMENT CAPTAIN CANUCK - -I DO NOT SET THE PRICES FOR CANADIAN SHIPMENTS - It's supposed to be FREE SHIPPING, but International Shipments aren't covered.  If you're Canadian and you want some of my cards, let me know ahead of time and we'll work it out.

Not sure on how hard the Young Guns Exclusive was to pull, but there's SIX standard exclusives in a case of 10, so it's gotta be pretty rare.  Other copies have sold between $30 and $60, so my $50 price seems reasonable to me.  I'm accepting offers on that one as well.