Down 8 to 1, one more loss meant losing the cup, and what does Oracle do?  Rattle off 9 straight victories and successfully defend.  Amazing stuff really.  It was a close race at the outset, ETNZ took the lead right away, but once again the third leg was the huge deciding factor.  Foiling upwind Spithill took the Oracle 17 and stretched the lead.  It was never in doubt after that.  47 second delta.  See you in 3 or 4 years. 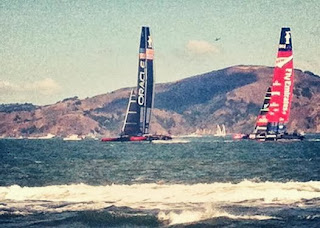 Posted by William Noetling at 1:47 PM No comments:

Most people in the U.S.A. know there's something called the Americas' Cup and they know it's about sailing.  They might even know that it's the oldest trophy still being contested.  Many people think that Yacht Racing is an elitist, rich person's sport, and to an extent it really is.  But if you think that it's all boring and no action, you're DEAD wrong.

The rules are complicated and usually fought over in court.  The teams are owned by very very rich men, the Defender is owned by Larry Ellison, founder of the boat's namesake ORACLE.  The challenger for New Zealand is owned by Emirates.  These boats cost millions upon millions of dollars, and they only race every three to four years.  The crew are the elite of the elite in sailing.  Skippers used to be poached by other countries, but rules have lessened that practice.

Right now, after some months of trials, a lack-luster Louis-Vuitton cup which saw only two of the three challengers of record actually get on the water, and over two weeks of match racing, it comes down to ONE race tomorrow winner take all.  In fact not only does the winning club get the trophy, but the next regatta as well.  So in 3-4 years we'll either be back in the Bay or down in Kiwi-land.

This has been an amazing set of match races.  In the past each race had been a very long affair, lasting several hours.  This time around instead of monohulls, the new AC72 class of boat was created, fixed-sail catamarans that can reach speeds of 45 knots (about 51 mph).  Now I have personally been on a fairly large sailboat that was going 25 knots in gale-force winds, and that was the scariest thing I've ever done in my life.  Now imagine going about TWICE that fast.  On a catamaran.  And MOVING from side to side.  In fact, at least one sailor has gone overboard during a race.  Additionally the course was shortened to a five leg 4 mark affair that flies by Alcatraz and shows off the Bay beautifully.

Due to a penalty assessed for cheating in 2012 prelims, the Defenders, Team Oracle were assessed a 2 point penalty, meaning that to successfully defend the cup they had to win 11 races, while the Challengers, Emirates Team New Zealand only had to win 9.  Two weeks ago at the start of racing ETNZ had a fantastic boat that looked unbeatable.  They won the first three races of the regatta by an average of 38 seconds.  On this course where the races last between 22 and 35 minutes long, 30 seconds is a lifetime.

Oracle finally got on track in race 4 erasing one of their two point penalties but only barely; the margin of victory was 8 seconds.  ETNZ came back and won the next three races by an average margin of almost 1 full minute.  Race Five was called off by Oracle using their one postponement card, they were down 1:17 on the third leg, so skipper Jimmy Spithill cancelled the race.  In race 8 with the Kiwis up 6 - 0 they made a huge mistake that almost capsized the boat.  At one point the right side of the hull was at about a 45 degree angle to the water and almost 20 feet off the deck.  Disaster was averted, but Oracle still wiped out their penalty.

By the time the Americans finally achieved their first point they were down 6 - 1 in the standings. Then it got worse.

On the 11th day of sailing the Kiwis had stretched their lead to 8 - 1, and were one race shy of taking the Auld Mug back to New Zealand for the first time since 2003.  With their backs against the wall Oracle had to pull off the almost impossible and win the next 7 races to tie. In their first elimination race they pulled off the victory by 31 seconds, but on September 20 the series appeared over.  In extremely light winds ETNZ pulled out an enormous lead on leg 4 of the 5 leg course, and looked to be sailing to the victory, only to have the match, Race 13, wiped out by the 40 minute time limit.

Since that point it's been all Oracle.  Every race has been a close-out possibility for ETNZ, and yet the Americans will not give up. ETNZ had been beaten to the start almost every time since Race 13 until todays Race 18 where Dean Barker, the skipper of Emirates finally took a short lead.  This was after actually hitting Oracle in Race 17 and drawing 2 penalties that doomed their early-afternoon bid.  Their lead actually increased to the first mark going 7 seconds ahead at mark 2.  After that it was all Oracle, a huge crossing in the middle of leg 3 saw both boats going upwind, and the Americans took advantage tacking right behind ETNZ as they neared the boundary.  They pulled ahead and killed the wind for the Kiwis and sped ahead never looking back.  What was once a 150 meter deficit turned into a huge lead and they won by 54 seconds.

Tomorrow is one race for the cup.  Now I suppose the Kiwis could still use their postponement card in the first race, but something tells me they won't, sportsmanship I suppose.  The entire country of New Zealand is on pins and needles, and should they fail to take home the cup, it will be devastating for all Kiwis.  Especially being one win away for almost a full week, if they lose tomorrow it will all be for naught.  Oracle has one race to go to complete the most unlikely of all comebacks.  If they do, most Americans won't really care, as sailing still isn't a major sport here.  But if they do win tomorrow, it will be a huge boost to the sport, one that it really needs after the tragedy of losing a sailor early in the regatta.

So GO ORACLE.  I'll be watching, will you?

Also, I really really want a model kit of Oracle.  Sadly I can't find one.  YET.

ReBlog - Follow your fellow Bruin Alumni in the NFL

Reposting from the Bruins Nation:

Of Course we all know about a couple:

MJD is back from a foot injury that basically made him a nonfactor in 2012. The Jaguars have almost no one else behind him at running back, so he'll get a ton of touches if he is healthy. He is also a free agent this upcoming season and as an aging running back, he has to perform at a high level or else he isn't going to get another contract. It might not be fun, but keep an eye on Drew if the Jaguars pop up on NFL Redzone."

Lewis has been a capable tight end since being drafted. Has he lived up to the Mackey Award winning expectations? No. But he's had a lengthy and successful career."

Who do you think was the all-time greatest UCLA Alum in the NFL?  Aikman?  Waterfield?  Jonathan Ogden?  All HOF.

Posted by William Noetling at 11:40 AM No comments:

So just like their BUNT app which is almost over for the season (and I now have 2K cards in) Topps released their HUDDLE app today, which is basically the same as Bunt only for Football.  I don't know about you but since FB is the national pasttime now, I suspect it's going to be very very popular.

So what are you waiting for, download it NOW, and sign up!  Use WILDWILL as your promo code and you'll get extra coins!  Then trade with me.  If you put in the comments that you read this on my blog I'll give you something extra in your trade!  (HOWEVER, make it a fair trade don't ask for the Sun, Moon and the Stars and expect to get it for scrubs just because you read my blog... ;0 )


Also make sure you sign up for http://huddlemania.boards.net/, the premier community to discuss Huddle outside of the game.  There's also a Buntmania which I'm very active on as well.

Come on join the fun!

Posted by William Noetling at 11:40 AM No comments: