In my introduction to my Doctor Who Reviews I mentioned that I'd try to work in the collecting aspect with each review, and in only my second review I already forgot about that. So here's a quick article to make up for that fact, focusing on the some of the Tom Baker collectibles still available.

Because Tom Baker is the most recognized Doctor in the U.S. there are quite a few collectibles out there with his mug on them. More than a couple of certified autographs have been issued in various trading card series, here are a couple from a set called "Strictly Ink" 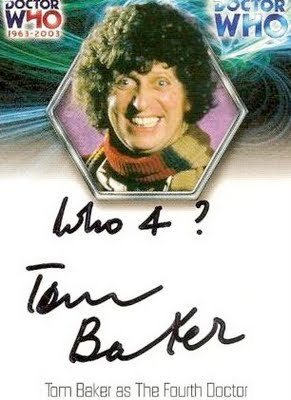 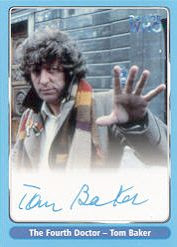 Of course it wouldn't be a science fiction show without Action Figures now would it? The earliest Fourth Doctor figures come from Denys Fisher in the 8-9" Mego style of the 70's. These figures are HIGHLY collectible and rare these days. With many of the Mego style figures of the 70's, the plastic has deteriorated and either become discolored or brittle and these weren't really imported to the United States, though they were available in other parts of the world. If you do happen to see them, expect prices to be very, very high.

The Italian version of the Denys Fisher Doctor figure.

You'll notice that he's sans scarf and hat, many collectors customize their figures. In fact I'm thinking about bidding on one on eBay that comes with a custom scarf. The quality of the sculpting looks about as good as you were going to get during the 80's, though articulation is on par with figures from the 70's. Since they're just now over 2 decades old you can still find specimens MOC (mint on card), and they're even usually reasonably priced. There's also an extensive line of other figures in the same scale, including Daleks, which is fodder for a later post. 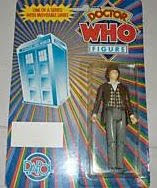 More recently Character Options has been issuing new series and classic Doctor Who figures in the 5" scale with increasingly better articulation and spot on sculpting. They also had the foresight to include both his scarf and a head with and without a hat. Plus there's a sonic screwdriver accessory. SO nifty. You might still be able to find these at retail in good comic-book or specialty toy stores. You can definitely get them online, and you shouldn't have to pay more than $20 for one MOC.

There are also several exclusive repaints of the figure, but they're all just about the same sculpt, just different paint. The best part about this figure is that the Character Options line of figures is quite extensive by now, featuring over 100 different figures with MOST of the incarnations of the doctor produced already (I think the 7th and 8th doctor are still missing).

I can't find any figures of a young Sarah Jane Smith, or poor Harry Sullivan. Sarah Jane is available in plastic form from her current show "The Sarah Jane Adventures", but if you want the 27 year old version, you're out of luck.

Posted by William Noetling at 10:41 AM