I'm really having a great time making custom trading cards lately, especially when there's an event that I can piece together to make a fantastic collectible.  We attended the Los Angeles Kings v. New York Islanders tilt on Saturday night having gotten tickets to support the Girl Scouts Family Night at Staples.  This being our second game of the season we were really pumped to see a Kings victory.  When I found out that we'd be getting to see Martin Jones second start in the NHL I got really excited, yes I know a true hockey fan shouldn't get happy over a rookie goaltender, but I really think that Jones, age 23, could be the future of the franchise, not that current starter (since Jonathan Quick got injured) Ben Scrivens is chopped liver.

Jones first NHL game came on Tuesday of last week, facing the hated Anaheim Ducks.  His numbers were pretty darn good in the regular session and even better in the overtime.  He stopped 25 of 27 shots in regulation and one in overtime.  The only goals he allowed were a tip in by Ryan Getzlaf where he was screened badly and an early 3rd period power-play goal by Corey Perry The Kings got goals by Jeff Carter to start the scoring and then when they were down 2 - 1 with about 15 minutes left in regulation the Captain Dustin Brown tied it up on a wrister.  After the overtime we go to a shootout these days.  The Kings have the second best shootout record in the NHL currently, with 5 wins to only 2 losses, however both of those losses happened recently, one against Buffalo in the game where Quickie got injured and Scrivens had to come in for the 1:20 remaining in the overtime and face the Sabres one-on-one.  Versus the Ducks neither team had any success in the shootout for the first EIGHT rounds!  Jones made some incredible saves that looked nearly impossible and Dwight King finally put it past Jonas Hiller in the 9th round.  It was a beaut and good enough to give Jones his first NHL victory.

It was Larry Murphy Legends night on Saturday, which meant two things; one we each got a nice Murphy bobblehead and two the Kings wore their throwback Purple and Gold uniforms, which really looked incredible in person contrasted with the old-school white and orange Isles sweaters.  Everything was set up to be a great game, but in the first period with no scoring and lackluster play from the home squad it really wasn't looking that great for our boys.  Until Anze Kopitar received a fantastic pass from Alec Martinez fought off Travis Hamonic and went top shelf against Poulin.  I've never seen a prettier goal in person to be honest.  It starts at about 1:09 of this video.

Dustin Brown scored his second goal in two straight games in the third and ROY candidate Tyler Toffoli added an empty netter for Jones first shut-out.  He wasn't even that busy, he only had to make 16 saves, and only a couple of them were really quality scoring chances.  This kid looks incredible and I'm really happy to have been able to see him play in one of his first games of his hopefully long and storied career.

We actually got three physical tickets for the game, something that is in short supply these days.  With the home printing of tickets and scanners at the game making sure everyone has a bonafide seat there just aren't that many stubs made for each game.  After my success with the Don Rickles Cut Signature Card I really wanted to make more cards.  What better memorabilia to embed than our own ticket stubs?  I used Topps 2009 Ticket to Stardom Baseball set as inspiration and I'm pretty happy with the results.  I'm making two this time, even though we have three tickets, one has to go into my ticket stub scrapbook. 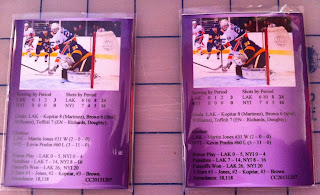 One of these is going to my daughter, I'm keeping the other.  She said she's going to hold onto it forever and give it to her kids.  She's seven.  Now she wants to make her own trading cards, good thing I have some canvas types that she can just draw on, because there's no way I'm giving her an exacto-knife.


Posted by William Noetling at 3:30 PM