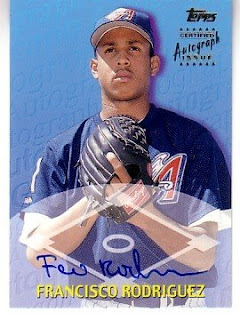 The Angels took a 5-2 lead into the top of the 9th against division rival Seattle, who were supposed to challenge the Halos for the AL West crown this season. Frankie ran in from the bullpen, fire in his heart and took a quick 0-2 lead on lead-off batter Miguel Cairo who then doubled to left. He walked Luis Valbuena, but once again took an 0-2 count on Ichiro who would end up grounding into a fielder's choice putting runners on first and third. He struck out Jose Valentin on a 2-2 change bringing up Raul Ibanez who he got on a 3-2 fastball looking.

Congratulations Frankie! You earned it the hard way. Let's hope the Angels reward you with a nice fat contract at the end of the season right after you hoist the trophy.

BTW that's his Topps Traded Rookie Auto up there, it WAS selling for about fifty smacker on eBay, but you can bet it'll go a bit higher now.
Posted by William Noetling at 8:50 PM