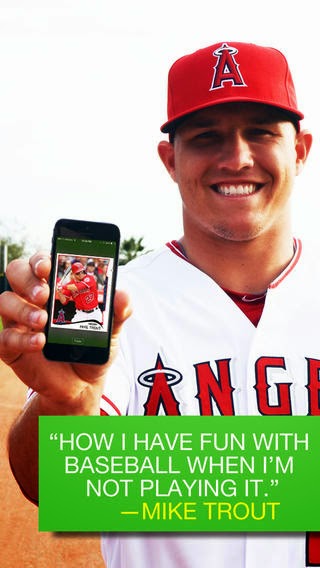 The fusion of online trading cards and fantasy baseball that Topps introduced in 2012 is back for another season, and Angel Favorite Mike Trout is their official spokesman this year, which means his mug is all over the app.  Not that it's a bad thing mind you.

The bad thing about BUNT is that your previous cards won't gain you points this year, so you'll have to spend a bunch of coins on new cards, or trade off your 2013 for 2014.  However, since today is the first day, the market for 2013 and previous cards not just went soft, but it melted into a mush. 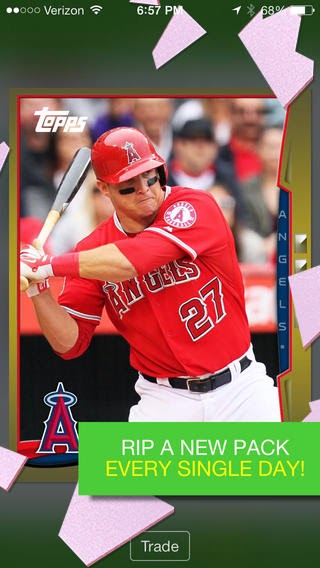 So this year we're able to do 9 for 9 trades or 9 for 1 or any combo that would allow.  SO that's better than the 3 previously.  We're now only allowed ONE account per device, which I think is great to get rid of scammers.  Sadly scammers will still try to scam, and Topps won't be able to do much about it, just as in previous years.

We do get a new "rate your trader" functionality, but since you can make a rating on a declined trade, I'm not sure how that's going to work out.  We'll have to wait and see on that.

Oh and the players themselves score points way differently this season.  Now it looks like each player has 5 tiers of cards from Commons worth 1x points to Super Rares, which I guess are worth 5x or something.  Not really too sure on that.  The other rarity levels are each worth more now too, uncommons are green and worth 2x, rares are red and worth 3x and scarce are silver and worth 4x.

I'm back playing this year, my user name is WILDWILL (same as in Huddle too).  Hit me up as a friend and send me your Angels cards.  All I care about is collecting the Angels Team Set.  If you tell me you read my blog in a trade offer I will give you a free DOUBLE 2013 rare from my collection.

Posted by William Noetling at 12:39 PM