Many many moons ago I reviewed the First Generation of OYO Sportstoys mini-figures.  Today I'll be reviewing their newest line, NHL players!

OYO Sportstoys has come a long way since their initial set.  Not only are they doing three of the four main sports (with only Basketball as their holdout) but they have licensed baseball and football fields.  During the Superbowl just a couple weeks back they held their own OYO Bowl with their mini-figs re-enacting plays from the game.

Their first foray into NHL players were current stars from the Original Six teams, and these came out right before Christmas.  Expansion number one saw figures from the 1967 expansion teams including my home-town favorite LA Kings.  I would have pre-ordered these if I could have, but alas, I had to wait until they were available on OYO's official site.  I placed my order on February 6 and received it this morning, so 9 days shipping.  Two figures and shipping cost just under $29, which let's face it is not cheap.

The packaging is pretty much the same as for baseball.  Better printing, but that's about it.  Each package is personalized to the player.

Inside you get your player, helmet, visor, stick, puck, skates and a stand.  Only my Dustin Brown didn't have one of his skates.  He's a sad Dustin Brown.  This first series features the Kings in the black duds they've been wearing since 2008.  Currently this represents their home colors, but that only switched before the Stanley Cup Season.  The decorations are what you buy these figures for, they're about as authentic as you can get.  I personally am looking forward to seeing the white road unis, and I'm REALLY hoping for throwbacks to the original Purple and Gold days. 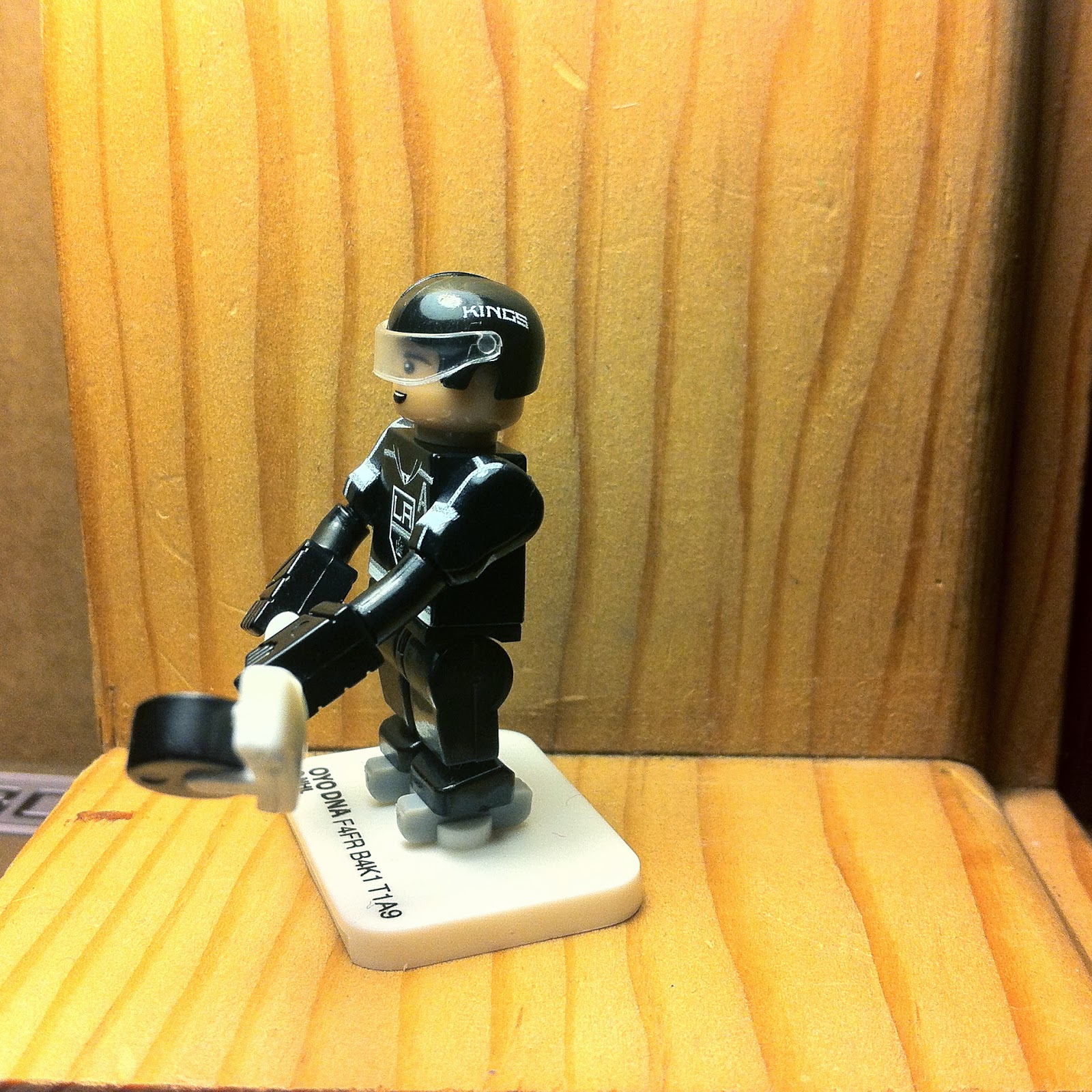 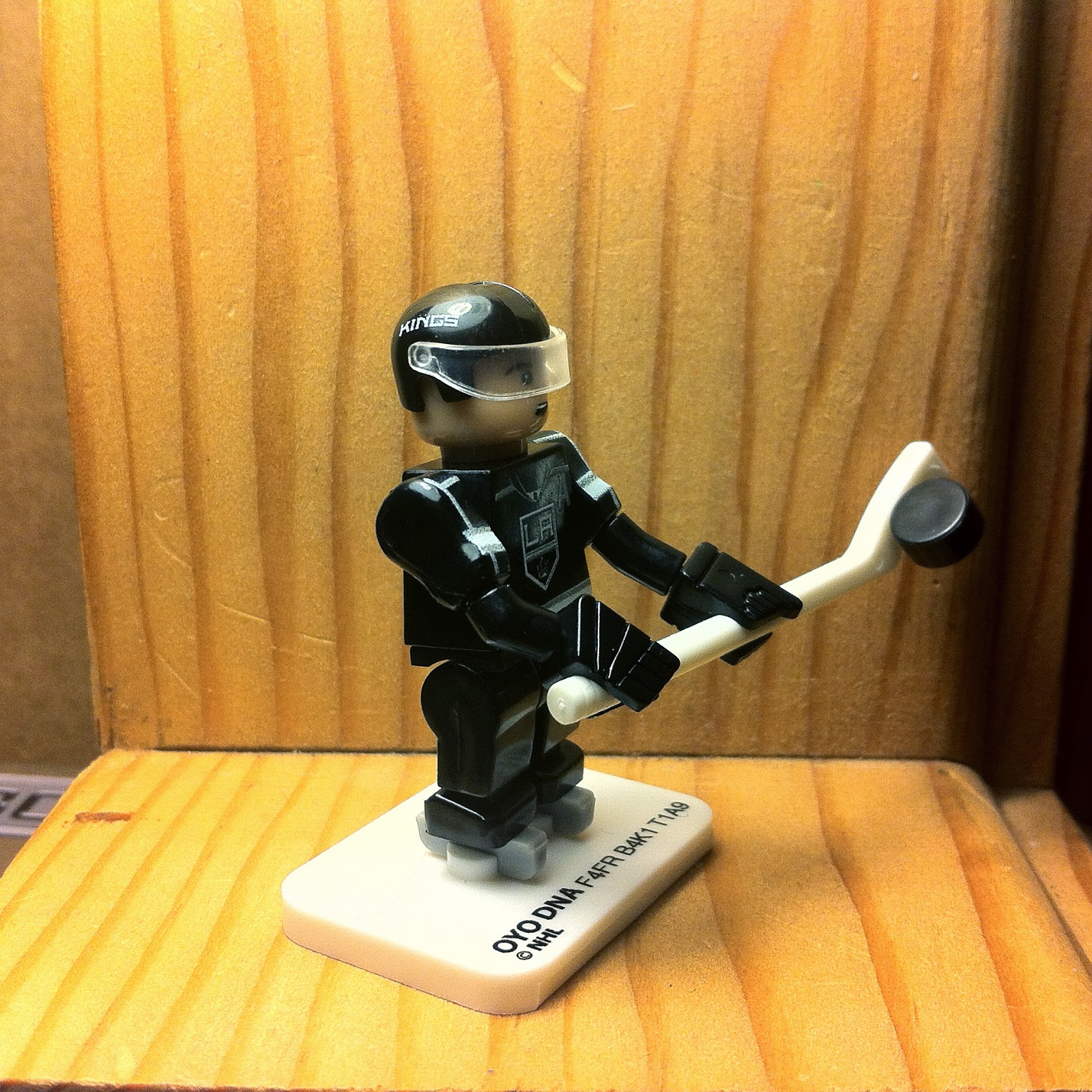 Getting their skates and helmet on is no problem.  The visor is a bit too fragile and small compared to other mini-figure manufacturers.  The skates are really small, but they work surprisingly well and the stand is designed to fit them properly!  The stick works fine especially with the puck, which has a notch that attaches itself to the end of the cleverly curved stick!  It's a great idea and makes the poses look awesome, though without the puck there, the stick looks really odd.  There's actually two molds one for righties and one for lefties! 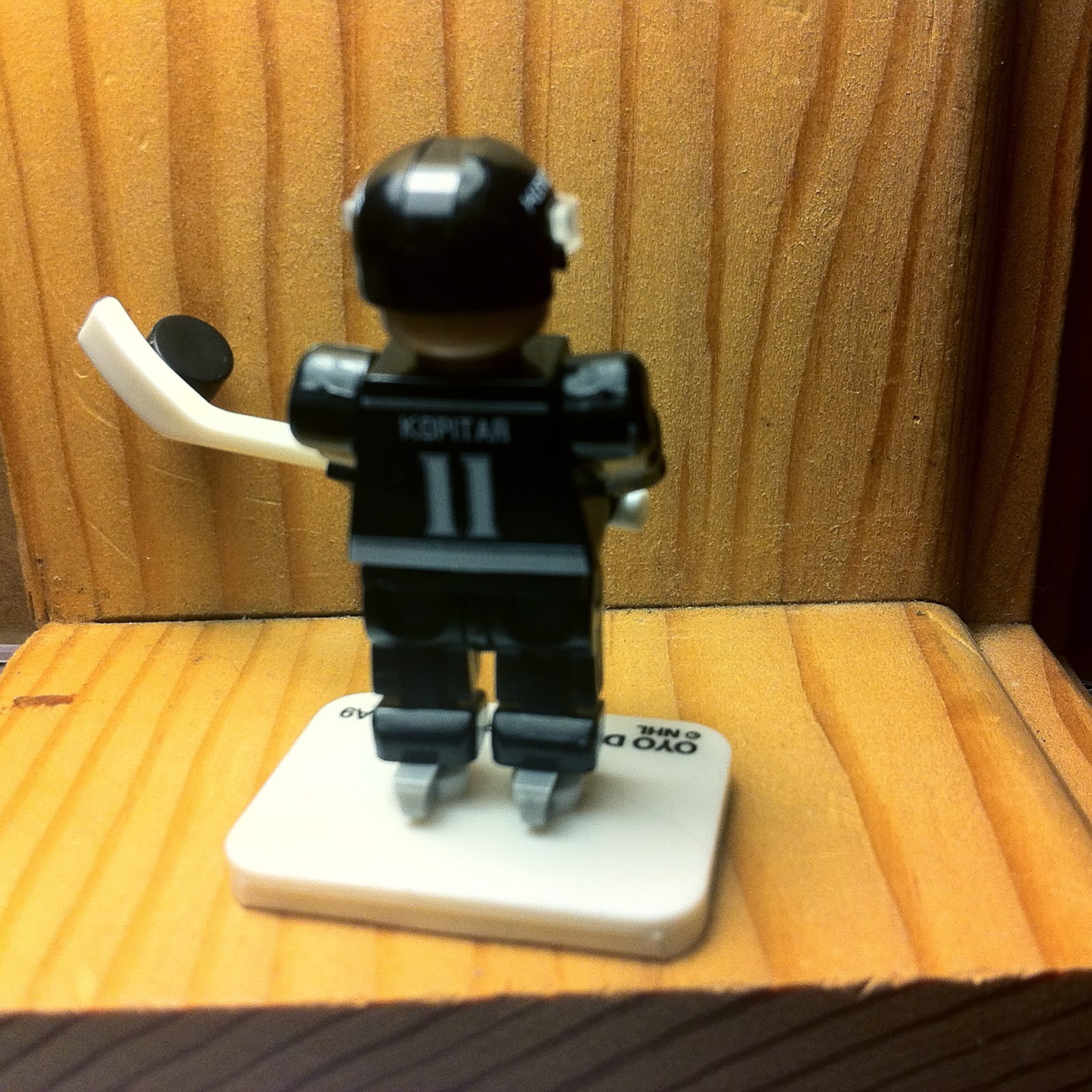 The original Baseball OYOs had bent fore-arms that made their articulation work really well.   The Football series figures all have "One straight forearm and one bent forearm to achieve even more poses."  The Hockey series follows the Football model with their shooting arm in real life being their straight arm on their figure.  All of which makes these guys be able to achieve about two poses.  Maybe.  That's if you can keep their arms on, the very small diameter of the pins connecting the arms together doesn't keep them together very well.

The entire package is a great toy, don't get me wrong.  I really enjoy these figures and I'd buy many, many more.  If they weren't so darn expensive.  I'm sorry but $14.50 for a mini-figure is outrageous!  Blind bags of McFarlane's SmallPros which are NFL licensed are under $5.00.  I say ditch the costly packaging and put them in cello bags.  Also, I want a rink.  With goals and the ability to put my figures on moveable rods so I can play hockey.  The old LEGO sets stunk for that.

DISCLAIMER: The items featured in this review were purchased by the reviewer.  If you'd like to send me products to review, please contact me via email to WMNOE at YAHOO dot COM. 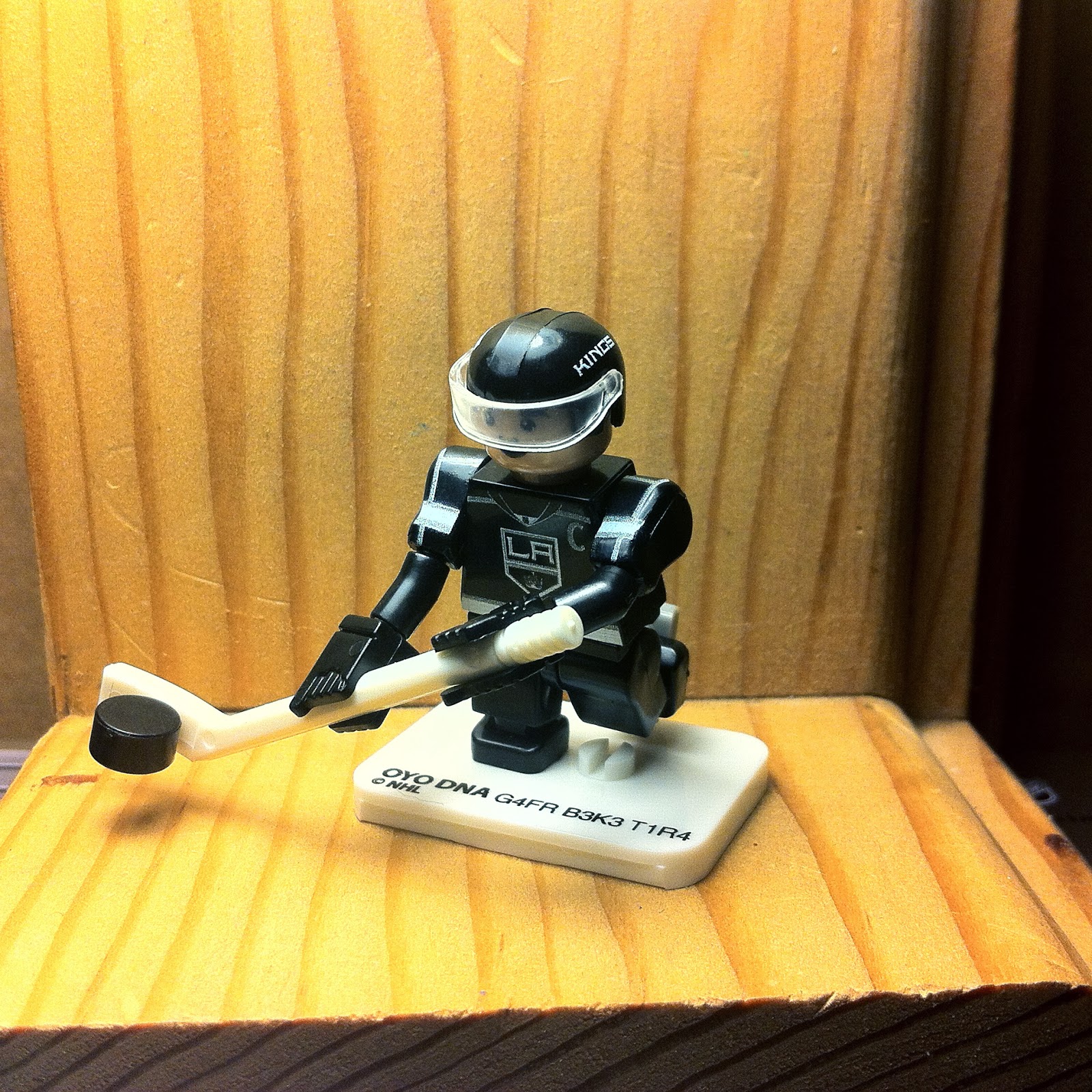 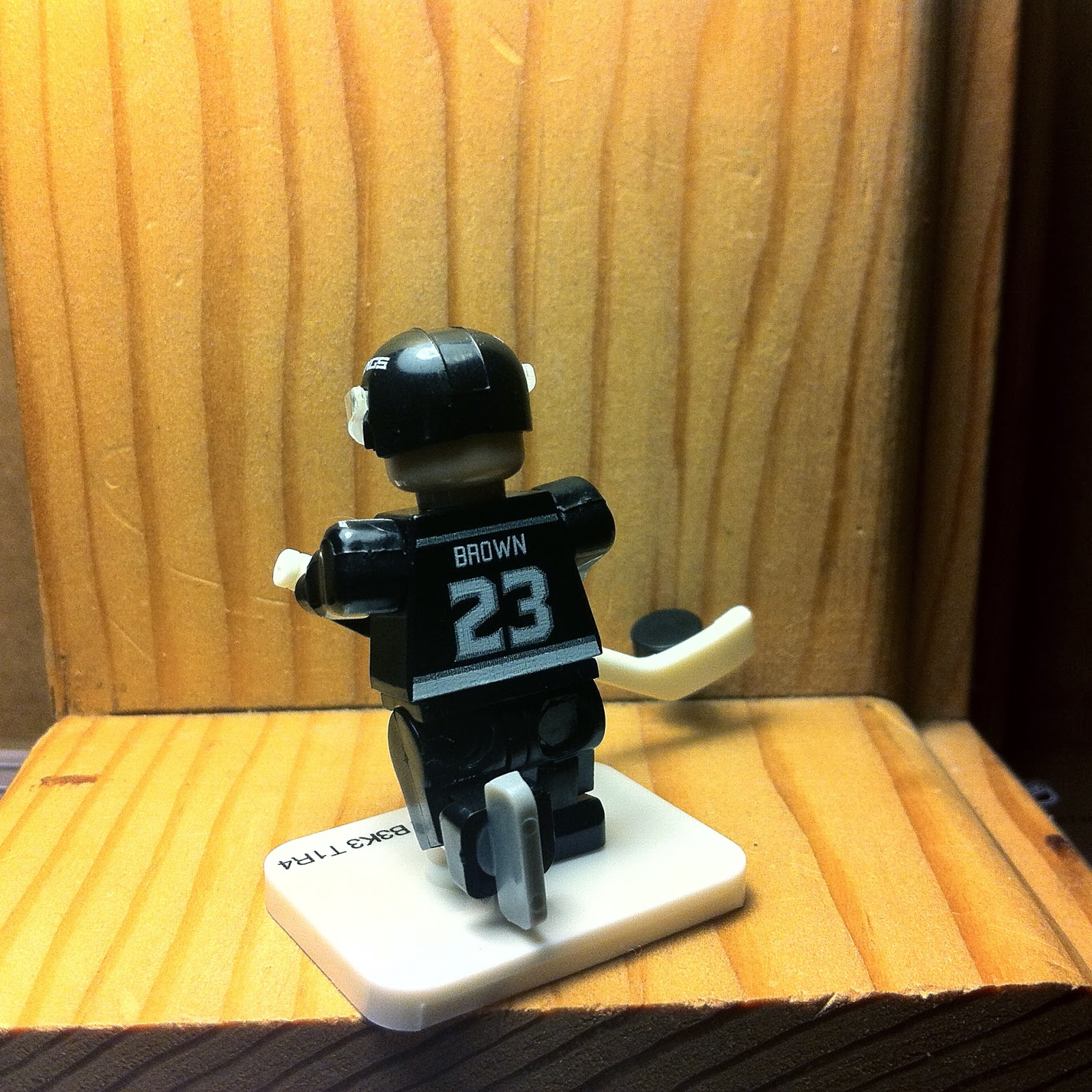 Posted by William Noetling at 5:48 PM