Crowdfunding is not a new paradigm, it's existed since at least the 16th Century.  According to Wikipedia good old Wolfgang Amadeus Mozart tried crowdfunding in 1783 offering such rewards as manuscripts and other paper ephemera with his handwriting/signature, and HE WAS NOT 100% SUCCESSFUL!  Think about that for a second.  If Kickstarter had been around back then he'd have no problems getting more than the amount he asked for.

Kickstarter?  What's that?  Well, it's the biggest crowdfunding site around, though there are others, KS has been the most successful format so far in bringing creators and funders together.  KS uses the "rewards" based funding method in that when you donate to a project you should receive some sort of pre-determined "reward" based on the project itself.  Other projects are "equity" based, meaning that when you donate you receive a certain amount of ownership of the project and based on that ownership you may (or may not) expect a return on investment.  I wish I could afford some of the equity based projects, but for now I'm sticking with rewards, why?  Because I like things.  Yup.

The interesting thing about Kickstarter projects is that you can, if you choose, to donate virtually any amount to the project, even as low as a dollar or two.  Now at those levels you usually only receive virtual rewards, such as wallpapers, pdfs, or a mention on their website.  The more money you donate, the more rewards you can expect obviously.  Most KS projects have many tiers of rewards, and even what's known as "stretch goals" where once they receive the initial amount they're asking for the creators can offer better rewards for the more money they receive.

I backed my very first Kickstarter in November of last year, pledging to give $25 to Dale Mathis for his 3D Art Deck of Cards.  Here's the link to the project.  I can't remember where I got the link in the first place, I might have just been browsing the site for cool stuff, or I may have been directed there by Bleeding Cool or IO9.  IN any case I was transfixed by the cool design and the steampunk theme.  Now at the time I pledged $25 was the least I could pledge to just get the deck itself and while I would have liked to get the dice and frame, those were way out of my budget.  If you get on KS early enough you can sometimes get really good stuff for really cheap.  For example, Dale's FIRST pledge of more than $1 got everything in the KS, because he was being really cool.  Then the next 20 or so pledges could get the deck for like $12 shipped.  So my biggest tip to you if you're interested in KS is to browse often for new projects you like.

The shipping time on rewards is something that can be an annoyance.  Most rewards are made from the funds derived from the project itself, which seems fairly logical.  SO first the project has to fund, which takes 7-10 days after the project closes.  Then the creator has to get the product made, and usually they will have given you a time-table on all aspects so you know what to expect.  If you think you're getting your rewards within 6 weeks, you're mistaken.  As I said I backed this project in November of 2013 (EARLY November at that) and my rewards just arrived today, which is a turnaround of 8 months.  I have backed three other projects since then and haven't gotten any of my rewards yet. 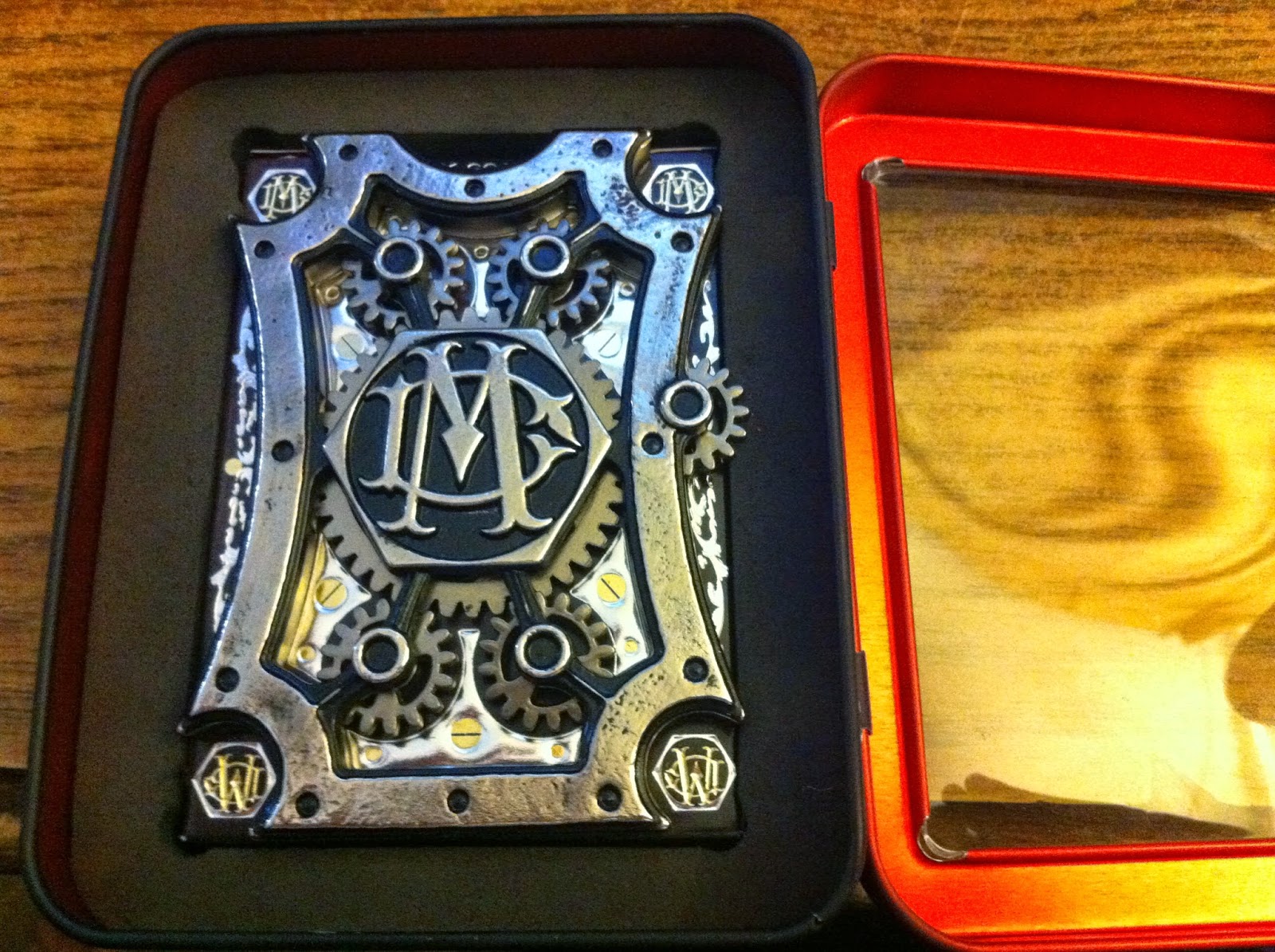 But I did get my 3D Deck of Cards, and they are amazing!  Here's the deck in it's case, which is housed in a custom matte black painted tin box.  The inside has a removable foam insert, also custom. 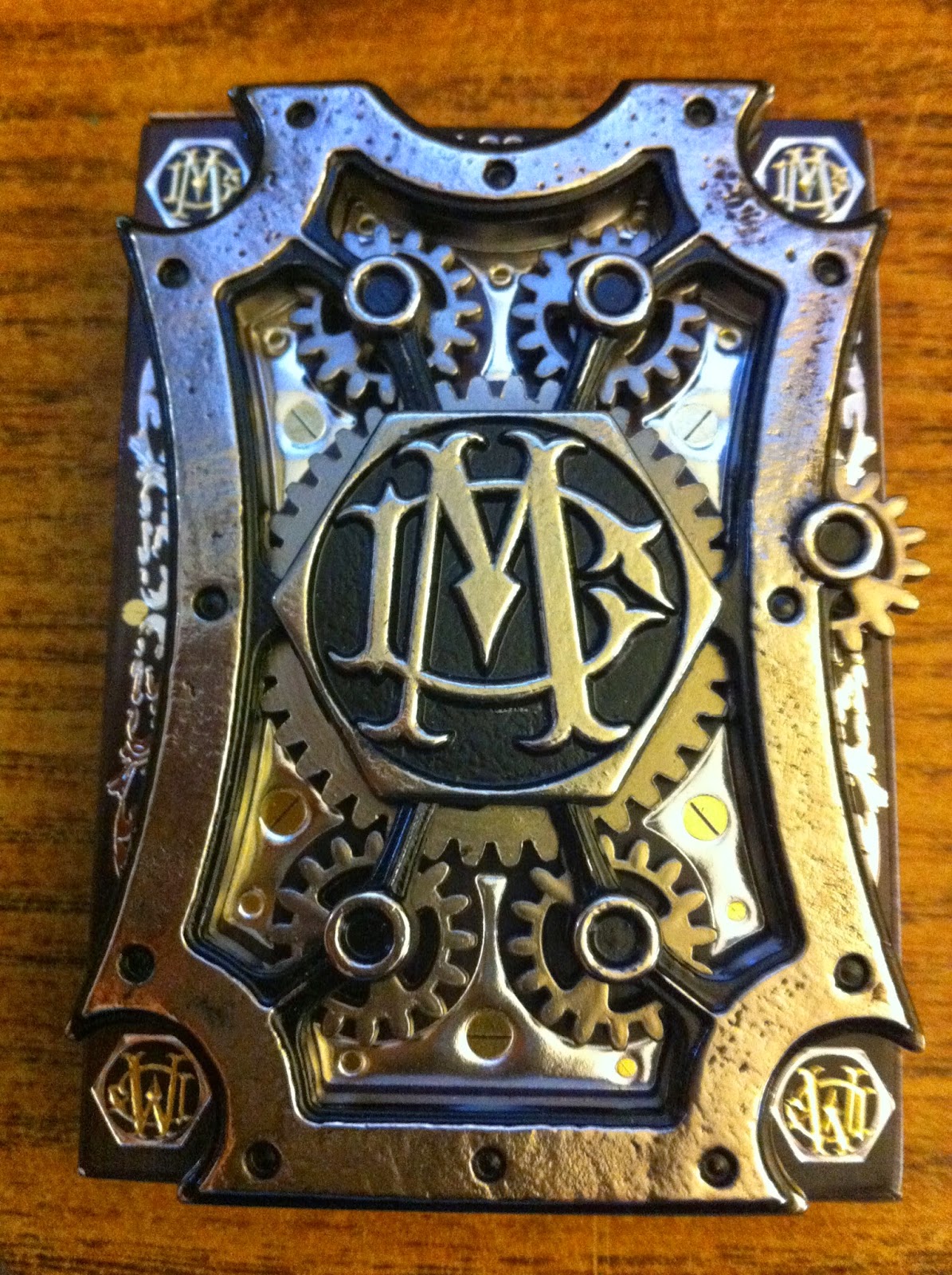 The deck box itself is a standard paper box, but it's the large 3D Sculpture on the front that is the centerpiece obviously.  I didn't go for any embellishments on mine, and I think it looks amazing.  The gears all move and the thing is seriously heavy. 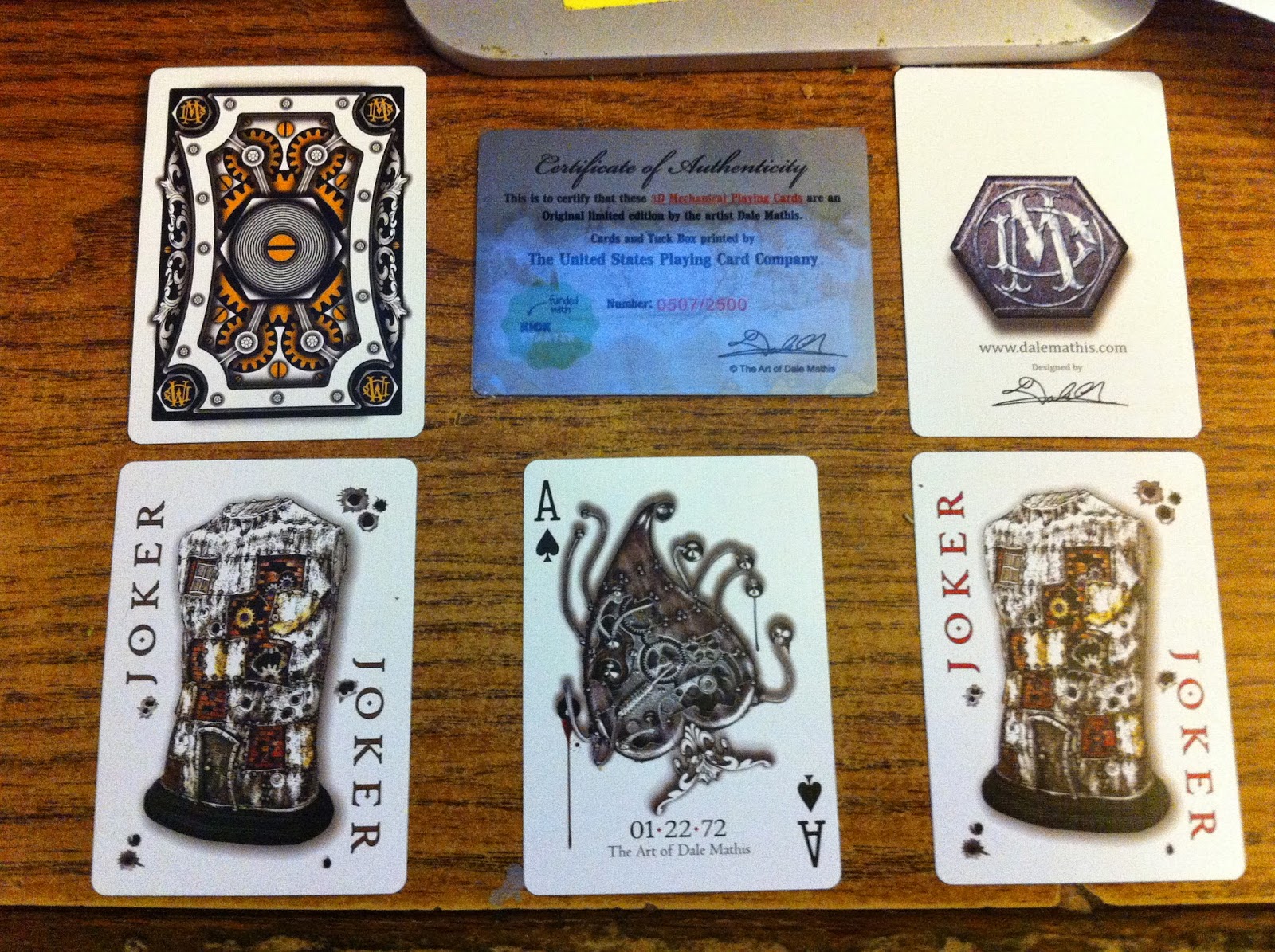 Some of the cards themselves.  Clockwise from upper left: The double-sided card showing the standard card back, the metal certificate of authenticity which also is used to attached the deck to the custom frame, the DM Logo card, Red Joker with DM Sculpture, Ace of Spades featuring DM Sculpture, and the Black Joker.  The other cards in the deck are standard Bicycle playing cards.

If you're interested in getting one of these decks, I suggest you either peruse eBay or check out Dale's site Dalemathis.com to see if any make it into the store.  eBay will set you back a bit though, the only one that has sold so far went for almost $80.

Here's the other projects I've backed so far.

Have you backed any Kickstarters?  What'd you do and what'd you get?

Posted by William Noetling at 12:38 PM