I will admit it, I have the Doctor Who bug again. Doesn't everyone get a bug up their butt about something every now and then? Plus it feels good to write something. Anything.

I recently decided to vary my Classic Doctor Who viewing, mostly because since there's so many stories out there (over 200 so far) and the show has been on for so long, if you decide to view in a certain order the entire thing can get overwhelming. What I've been doing is taking a sampling of all the different Doctors. As you know I already reviewed a whole season's worth of the Fourth Doctor stories, so when I came back to Classic Who I thought I might try someone different and looked at the First Doctor's first serial. The problem with the First Doctor is that not all the episodes are available easily and some are frankly missing (there are missing episodes in each Doctor's run until the Fourth Doctor). So I moved on to the Fifth Doctor.

After enjoying his first serial Castrovalva I wanted to delve right back into another story, one that was a bit more, well, standard fare. The introductory episodes of a new Doctor always feel a bit off, in that since the personality isn't really established anything goes. The interesting thing with the current incarnation of the Doctor, Matt Smith, is that anything goes for the entire run with him.

"Four to Doomsday" starts off with the TARDIS materializing inside of a giant spaceship, complete with the Star Wars-esque long opening shot of the giant cruiser. The Doctor puts on a silly helmet which is supposed to let him breathe and steps out into a room filled with all sorts of scientific devices. He discovers that he's being watched, and our villains are introduced. Appearance wise they are similar to the Vogons of Hitchhikers' Guide to the Galaxy by Douglas Adams, who as we all know or should know was a former script editor for Doctor Who. Oh and when I say Vogons, I mean the ones from the ORIGINAL BBC television version, not the ones from the Hollywood Movie (which I rather like, but I digress). They hail from the planet Urbanka, are aptly named Monarch, Enlightenment, and Persuasion. Shortly after introducing themselves our heroes are given a warm welcome and asked to assist Monarch in his plan to relocate the entire Urbankan population to Earth.


The Doctor then discovers that Monarch has been preparing Earth by snatching up whole tribes or small cities over their previous visits. He enlists an Ancient Greek named Bigon to help them thwart the green pile of goo's plans. There's some further interesting bits involving robots, dragon dances, gladiator combat and aboriginal dancing. It's all rather muddled to be honest, and following the actual plot was more than a hassle. In the end our hero is still The Doctor, the villains are still stupid and good wins the day.

* I can really see why the character of Adric (Matthew Waterhouse) was so reviled by fans back in the day, because he's rather obnoxious throughout the proceedings.
* Tegan and Nyssa don't get a lot to do either, and are used as hostages for the most-part.
* Former Pink Panther series regular Burt Kwouk has a part as the leader of the Chinese faction of Monarch's slaves.
* Nyssa collapses at the end of the episode for no apparent reason and is simply tired.
* The scenes of the four earth-cultures doing their "entertainment" are rather odd and misplaced. However, they are also the most interesting parts of the episodes.
* There is a really hilarious set of scenes where the Doctor exits an airlock and space walks to The TARDIS. You really have to see it. 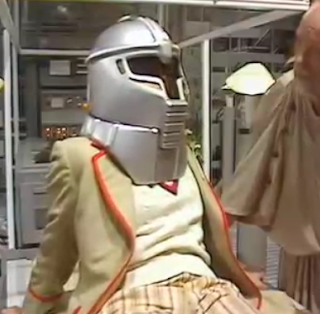 The there's the space helmets. This episode is full of them. No one really knows why.


I can't say that this was my favorite serial, nor can I really recommend watching it other than for completist sake. Nothing really exciting happens, though we do get another look at The Fifth Doctor's new personality, and I suppose that's something. Too bad it's not really enough.

There doesn't appear to be anything collectible that would tie into this episode directly, other than the requisite novel adaptations and video releases. All of which are readily available. If you have to have them.


Previous Entries in the "Doctor Who Review" Series: