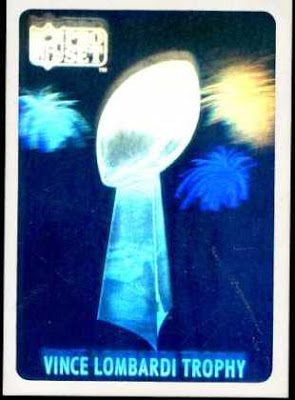 I'm feeling rather nostalgic today since it's my 41st Birthday. Something I was just pondering - why don't card companies make Hologram cards anymore? I really enjoyed those in the 90's and I haven't seen a full hologram card in forever, and they were just damn cool.

The very first Hologram that was released officially was that Lombardi Trophy card in 1990 Pro Set. While I bought (and to this day still buy every now and then) a ton of packs I never pulled the thing. To this day it's still one of the more valuable "regular" Pro Set Cards, in that it's not really an error.

That card caused a lot of grief back in 1990, initial cases of the cards could be searched by a metal detector and thus a bunch of folks managed to snag multiples and turn them for a nice profit. Pro Set responded by putting in foil decoys in packs, making them essential unsearchable. The fact that they were hand numbered to 10,000 helped fuel the frenzy. Today you can find one on the bay of e for under $50.

1990 saw a virtual flood of Holograms invade the trading card world, after the Lombardi card manufacturer Skybox started inserting them into their comic book sets, which makes sense, since the artwork on the card was often rather colorful. Unfortunately I only have this one DC Superman to show off. 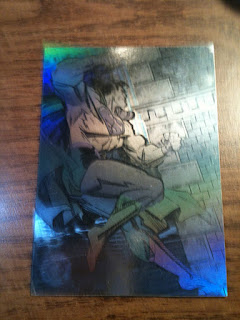 Eventually Holograms would move from the realm of insert to the actual base cards with the Batman and Superman full hologram series. These were really awesome cards, as not only were they holographic, but they were taken from 3-D Models! A further technological innovation would be the awesome SKYDISCS from Skybox which when placed in full sunlight would project a 3D image not unlike how the holograms work in the Star Wars movies.

I really miss Hologram cards, when I would pull one from a pack I'd always shout "ooh Shiney" and that became a mantra with me. Foils are nice today, and autos and relics still make me excited, but not the same as holos.

Oh and did I mention they took a sharpie autograph NICELY? I used to have an autographed Marion Butts from Upper Deck Football with a beautiful blue sharpie in-person auto, but sadly I do not know where it went.
Posted by William Noetling at 6:37 PM

Yeah, seriously. I've got a few 1991 Marvel hologram cards and they are so cool.