You never know when you're going to find something really cool. Today on the way back from my daughter's Yoga class I decided to stop at Dreamworld Comics where I was immediately drawn to a huge bucket of loose toys. I started digging and soon noticed a mint complete Roman Auton and I got all giddy. Perhaps could there be other Who toys in the bucket? Sure enough I snagged a Fez Wearing 11 and Amy Pond in Kiss Girl outfit. So I took my score up to the front and the gent told me they were only $2 apiece! Naturally I went back and looked for more. Found several more Autons, but nothing of excitement, until I figure out what the flat gray squares were...there seemed to be quite a few of them. Yes, that's right, the Pandorica from "The Pandorica Wave" of figures. Only they weren't the original release, they were the second one without the actual audio CDs (which I think are better anyway). The only problem is that the Doctor is missing his mop. Big whoop. I would like to get a scale sonic screwdriver though.

Of course it would have been great if I had actually purchased the River Song w/Pandorica Chair for $25 as well. I may have to go back and get that, since it's a great price for a crucial piece which I can really use now. 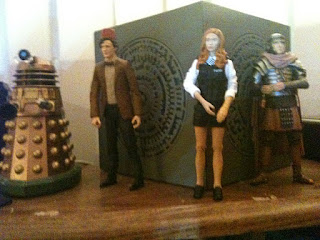 However, that's not to say the day was that bad. When I got home waiting for me was my Birthday order from Whonorthamerica - SIX of the Series 1 Blind Character Building blind bagged figures and a set of 1986 FASA Miniatures from the old role-playing game. This is my second order from the fine folks in Indiana, and I'm more than pleased with their service. Ordered on Monday night, it was shipped Tuesday morning and I received it this afternoon (Thursday). Priority Mail was only $5.60.

I greedily tore into the packs carefully cutting each of them open so that in case I got a double I could resell it easily. First pack was the Rare Blue Shirted Doctor which is 1 per 36 figure case, which is a great start for me. The next one was a Weeping Angel, the standard screaming version, (packed 4 in 36). So was the next pack, and the next pack AND the next pack after that. Yup, I got all four of that cases' Weeping Angels. Oh well, at least it's an army builder. My final pack held a Red Dalek (5/36). Complete with shipping the entire order cost me just over $25. I figure that I'll sell at least two of the four Angels, and possibly a third if I get any movement. There's NO single listings for them on eBay right now. If I get $4 - $6 each for them I'll be happy. Oh and if you would like to trade for something, please let me know.

Which brings me to a complaint: these figures are TINY. The packaging is small as well, and yet there are eBay sellers trying to get $6 for shipping these things. One in a bubble envelope shouldn't cost more than a dollar to ship. 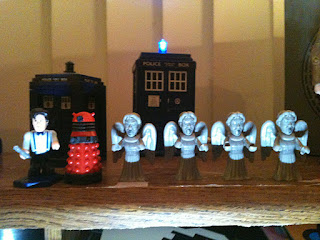 My new additions to my mini-figure collection. 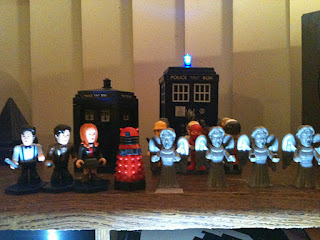 My entire "Character Building" collection - 9 Doctor Who Figures, 8 Generic CB Figures (plus one weird MegaBlock guy in the back.

Oh the dio stories I could do now.

Doctor Who Review Will Return

I have viewed the second and third 5th Doctor stories ("Four to Doomsday" and "Kinda") and am about half way through the first episode of the final 2nd Doctor story ("The War Games"). I'm going to put up a poll on the side - you tell me which doctor's stories you want me to review, and I'll do it!

You realize this is my THIRD post this week. Not too bad. See I told you I'd write more.
Posted by William Noetling at 6:37 PM