I consider myself pretty lucky to live in Los Angeles, the city being a mecca for international flavor and culture. I've been a fan of Anime and Japanese models & toys since I was a little boy watching Speed Racer and Star Blazers on afternoon cartoons. For years I've collected anime toys and models, though in recent years instead of buying whatever suits my fancy I've been forced to take a more targeted approach. Los Angeles is a great town for Japanese culture, having several sections of the city being predominantly Japanese in population. Not only do we have a Little Tokyo, but just a few miles West is an even smaller "Little Tokyo Street" - aka Sawtelle Avenue, where the likes of Giant Robo's flagship store is located. There's also at least once "general" store that sells a few Gashapon/Chogokun and models. My favorite place though is the a multi-level strip mall where Asahiya Bookstore and Ninjiya Market are located. I try to get there at least once a month, because a couple of years ago I worked two blocks away and could go there for lunch, I now keep trying to ensure I don't lose that fun tradition.

I checked out the bookstore first this morning, knowing that in the last couple months several of the Japanese Hobby Magazines had some cool extra-bonus items. See in Japan, their magazines are several hundred pages thick, and carry free-premiums in every issue, making their cost in American Dollars usually prohibitively expensive. Fortunately at the chain store Asahiya they usually have a separate "sale" section of older magazines for at least half price. Today I lucked out and picked up October's copy of Dengeki Hobby, which came with a complete Gundam 0 Raiser Stand Arts toy! For a whopping six bucks I got a nifty modeling magazine with glamour shots of the latest Japanese model kits pu together by master modelers, and a nifty toy for my desk. The O Raiser is an add-on fighter for the Gundam 00 mecha. Standarts figures are a nice budget priced toy line that is usually found in grocery stores amongst the Chogokun/Gashapon candies. While I don't have the actual figure this piece goes with, it's really unnecessary for display, and I may try to flip the toy anyway on eBay, you never know. 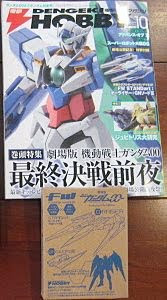 (I 'borrowed' this image from Gundam Guy which is a great guide to everything Gundam oriented you could ever possibly want or think up.)


So my budget tip for the day, if you're into Anime, make sure you check out the bookstores "sale" section for older magazines, sometimes you'll get awesome deals.
Posted by William Noetling at 12:35 PM