As I promised in my last post I would be taking a look at my next order from AliExpress, comprising another dozen or so new bootleg mini-figures and even one small set.  This batch was ordered on October 13, and the last set just arrived TODAY!  Most of the products started coming in about two weeks after the order, so that's not bad.  I can also make this promise, I'll have a THIRD article coming in a month or two after I receive the products I just ordered earlier this week.

First up is "Blondie", "Angel-Eyes" and "Tuco" from the greatest Spaghetti Western ever made, The Good, The Bad and The Ugly.  While I appreciate the old Lego Western line, I never really owned any, the theme being released during a time when I didn't buy any Lego sets. These figures however are more than enough to keep me happy.  "Blondie" or "The Man With No Name" considering he's never actually named in any of the Leone "Dollars' trilogy movies is clearly my favorite, coming with his pistol, a wanted poster featuring Tuco, and his signature Poncho, which he wouldn't actually acquire until the end of the movie.

Angel Eyes is well done also and comes with a piece of silver.  Poor Tuco doesn't get much besides his gun.  There's back prints on all the figures, but only one-sided heads. These were a whopping 65 cents each.  Maybe I should order a few more. 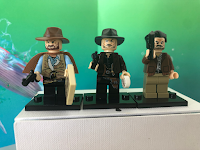 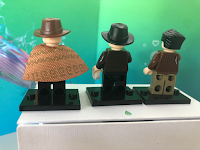 This next batch was an eclectic mix of random pieces.  First up, a red chrome "Classic Space" Astronaut.  Now, he's clearly not "Vintage" because the helmet is all wrong.  Also the printing on the face is similar, but nowhere close to an original space figure.  Something told me to pick this guy up in Red so that he'd match the original Red figure that came with my long-time grail set - 6929 Star Fleet Voyager, as I'd been looking to replace my original set for years.  Shortly after ordering this lot, I managed to find a good copy on eBay for a reasonable price and I pulled the trigger.  Even though that set came with the figure, I wanted to see if the display would look good with a chrome guy.  It does and it's fodder for another blog.

This little guy was my most expensive single figure purchase at $2.37. 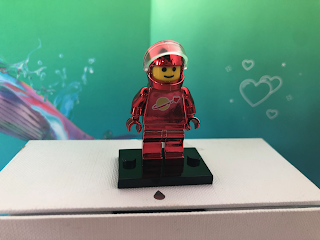 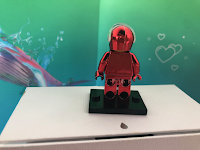 From the same seller I also chose a set of Saint Seiya figures from the eponymous Anime.  This show was always a weird one for me, as I always enjoyed the designs of the characters, but I never really paid that much attention to the story or even watched a whole lot of episodes.  Yup, I like the armors that much.  In fact I still own a couple of the Bandai Gold Saint figures from the mid-90's complete with their boxes.  Sadly there's no real improvement on the secondary market for them, I saw similar copies at the most recent comic cons for the same price I bought them new.

I can only really identify four of the six figures, Seiya, Cygnus, Phoenix and Andromeda.  The other two I have no clue.  This is actually the second set of boots I've gotten from this show, the other set which I found at the swap meet, is much much worse.  These actually look like the characters.  These were a little pricey at $1.28 each. 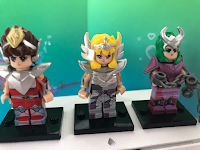 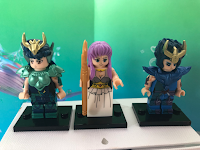 I actually bought TWO sets of anime figures, this one is the Sailor Scouts from Sailor Moon, and they went straight to my daughter.  I have virtually no knowledge of this show other than it's the progenitor of the "magical girl" genre of Anime and predates Pretty Cure, and is super-popular.  I'm pretty sure there's two versions of the main character Sailor Moon, but I'm not sure who the other three scouts are.  There's also Sailor Moon's boyfriend Tuxedo Mask here.  Nice figures though and cheap, they were 86 cents each. 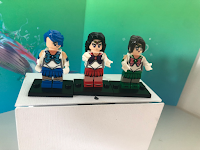 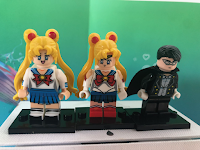 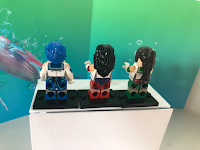 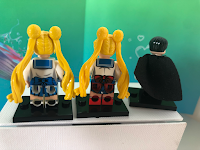 I bought two of the same figure because GROOT!  We are Groot!  He was 82 cents.  I love the longer legs, that's really the reason I got him, and of course one for me and one for the kiddo. 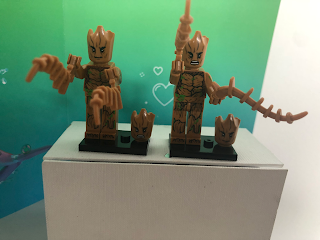 One of the things I really love about this type of shopping is that I can find figures that would never ever get made by Lego proper.  Here we have Alex from A Clockwork Orange and the legendary Bruce Lee.  I really wish Alex had pink flesh rather than yellow, but oh well.  The figure is quite nice with awesome back prints.  The Bruce Lee figure is pretty standard, the printing is nice, and he comes with some nunchuks, which are hilariously oversized.  For 65 cents each what more could you want? 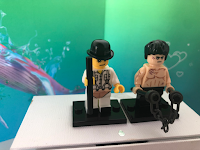 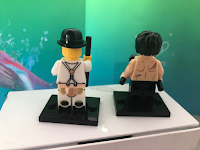 This next batch was strictly for the kiddo also, these are Minecraft figures, and I have no idea who or what they are.  The dragons were $1.30 and the figure (Alex?) and cat were $1.20.  The daughter loves them. 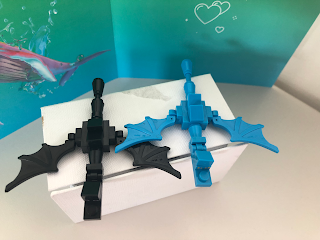 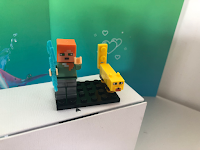 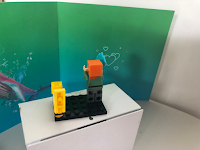 Here's the one actual "set" that I purchased, it's a Gundam Cafe!  This is one of six sets that Lepin released around the same time with somewhat "anime" themes.  The pieces here are nowhere near the quality of Lego, and the construction is a bit confusing.  The final product is less than stellar, but it's basically OK.  If there were other buildings in the line that I liked I'd buy others.  This was $4.36. 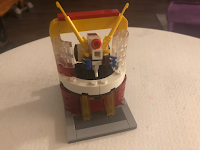 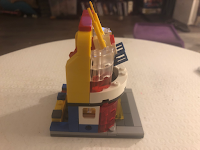 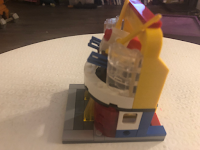 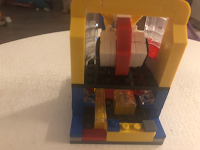 Last to appear in my mail were these two Godzillas in translucent plastic.  There's a number of colors to choose from, but they're all the same mold, so I went with Red and Green.  These are cute and will go nicely with my Gundams and other giant robots.  I could use more Kaiju mini-figs.  I'd love a line of Pacific Rim mini-figs.   The trans colors command a premium, these were $1.33. 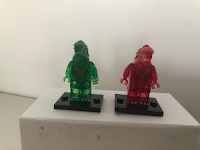 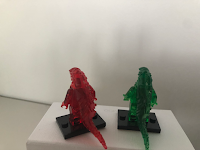 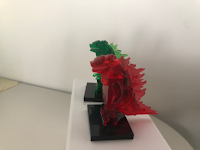 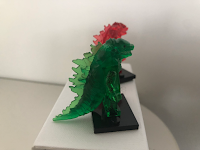 Posted by William Noetling at 4:36 PM

Not a big fan of bootleg Legos, but I gotta admit the Bruce Lee is pretty cool.