I realize that I haven't blogged about my beloved Angels since...err...June, but don't think that I haven't been watching, because well, I have been. I thought that if I remained a bit quieter this season that perhaps they would have better luck in the Post-Season, and thus far, my plan has worked to perfection. However, I just came into possession of the Official ALCS Program, thanks to the kindness of my upstairs neighbor Wanda who went to the game yesterday. 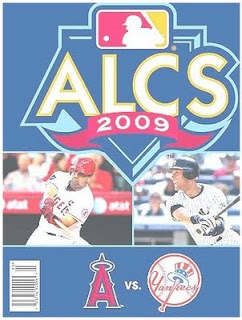 In our storage unit I have a ton of old sports programs, a good quarter of them are from games that I didn't attend, but knew someone who was going, so I asked them to get me a program. I don't know what my fascination is with programs to be honest, other than they permanently capture a moment in time in both the game and the culture of the city that the game is being played. I realize that I'm not the biggest collector of programs and have no real expertise on their collecting, so I can't offer any tips other than try to keep your programs in the best condition possible, during and after the game. This sometimes can be tough, especially if you don't like to carry any baggage with you during the games. In my circumstance though I almost always have some sort of bag with me, either a backpack or diaper bag. You can get plastic portfolios from any major office store for a buck or two, and they protect programs quite nicely and aren't too heavy to carry. A really savvy collector would also have a stash of sharpies at their disposal in order to gather athelete autographs.

The oldest game programs that I actually remember obtaining at a game are from the 1979 Angels season, their first in the playoffs in club history. That year I think I went to two games with my folks, at least I remember I have two programs. The older of the two was from earlier in the year, and I forgot who was on the cover. The second has Jim Fregosi, though it took me all morning to remember that. Here's a nice shot of Rod Carew, who the Angels had acquired in the off-season as a free-agent. 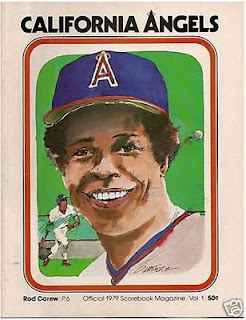 My personal mantra is that for every live event I attend I make an attempt to buy a program. I really don't know why, I just do. This isn't exclusive to sports either, though I have programs from a San Diego Gulls minor league hockey games, a Las Vegas Stars minor league baseball game, a couple of UCLA/Cal basketball games that I attended in the bay area, and a bunch of others. Mostly I have Angels, Padres and Kings game programs. I also own about a season's worth of USC Football Programs from the year I had season tix to the Trojans. I've got a half-dozen or so Super-Bowl commemoratives too, both from the years that San Diego hosted, and from when the Chargers were playing (1995). I have yet to attend a Super-Bowl though, I just either knew someone who was going, or managed to snag a retail copy. My obsession with programs extends to the theater and live concerts as well. Given that most of the publications are one-time-only affairs, they can become quite valuable. I have concert programs from 10,000 Maniacs, Pink Floyd, The Who and The Cult. I had to buy outrageously priced programs at the two Cirque Du Soleil shows we saw in Vegas, as well as the National Tour of Wicked at the Pantages. My mother still has her programs from the Beatles two Hollywood Bowl concerts in 1964 and 65.

I also collect media-guides, if I can get them. The LA Kings sell theirs at retail, though quite often they can be difficult to find at Staples. At one point I was buying them off eBay, but that was about a decade ago. UCLA also sells their Football and Basketball programs at retail, and they're relatively easy to find. Again, media guides are a great resource during the season, though now most of the info is available online as well. In fact, UCLA's media guide is posted in it's entirety online. Someday I'll be able to gather all the programs that I own and give them their own bookshelf. But then someday I'll also frame all the tickets from every live event I've ever been to as well...but that's another post.

As for the games themselves, so far I haven't been impressed by either team. I think the Halos gave away both of the first two games, which were easily winnable. Sure, we can blame the weather for the errors, but these guys are pros and they should have played better. Yesterday afternoon's tilt was a bit better, though again the Angels blew more than one opportunity to put away the hated ones in pin-stripes. Scott Kazmir takes the mound this afternoon and I really am hoping that this will be his break-out game in the post-season. He's had one bad start this post-season, though the Angels came back and won that one. He's had middling success against the Yankees in his career going 6-5 in 14 starts with a 2.67 ERA. The Angel bats looked like they finally came to life last game, I'd love to see Kazmir get some run support today.

Last Night was actually pretty busy in SO-Cal sports, with the Angels playoff game going to 11 innings, the Chargers blowing a half-time lead to the Broncos, the Dodgers getting creamed in Philly, and the Kings dominating the Dallas Stars in Dallas. It's a rare thing when three of the four major sports are running concurrently, and even rarer that all four will be going, but that's exactly what will happen on October 27 when the NBA starts. It used to be that Baseball would be over before the beginning of the NBA, but if the World Series goes seven games it will end on November 5, almost nine days into the NBA schedule.

Oh and UCLA Basketball practice has begun, our first game: November 4 against Concordia. We're playing in the 76 Classic tournament in Anaheim beginning November 26, and the Wooden Classic is on December 12. It's a good time to be a sports fan!
Posted by William Noetling at 10:35 AM