My mother, wife and I just took our 3-year old daughter to her first movie, and since she loved the first Tinker Bell DVD so much, we couldn't have chosen a better first than the sequel. We are fortunate enough to live in Los Angeles and have been to a couple of El Capitan screenings; if you ever get the opportunity it's an experience not-to-be missed. At $11 for the adults and $10 for children it's not especially cheap, especially considering that the DVD will hit stores on October 27 with a list price of less than the price of two adult tickets. However, the movie is playing at exactly ONE theater in the entire U.S. and for a week only. Disney did the same thing last year with the release of the first Tinkerbell movie.

As always once you're seated you're treated to a pre-show performance by Rob Richards on the theater's beautiful organ. The show's only just started though, when screening time comes an elaborate screen/miniature set plays some great animation reminiscent of the grand film palaces of the past. With every movie at the theater there's also a live-movie specific pre-show, for Tink it's just a single actress playing the titular hero who does a quick Irish jig similar to "Riverdance".

Previews: Toy Story 3, A Christmas Carol, Princess & The Frog. The first two were in 3-D with glasses provided. I hadn't seen any of Disney Digital's previous films, but I'll be darned if I don't want to see both of the upcoming 3D features, and I'm not a huge Jim Carrey fan! The preview for the most recent Disney Princess movie also contained a promotion for the exclusive 2-week engagement at the Disney Studios in Burbank

My daughter has just about worn out our copy of the first film in the Disney Fairies series, so we figured that she'd enjoy this one too, and she did, but being a 3-year old she was more afraid of the dark than anything else. The film itself is as good, if not better than the first one. We don't need any clunky origin story in this film, and thankfully there's no recap of the first movie either. The characters are all reintroduced, even if most of the familiar faces have little more than extended cameos. This is definitely Tink's adventure, shared with Terrence the Dust Keeper.

After the obligatory plot exposition beginning we get a few scenes of Tink and Terrence working on the big project, which of course ends badly. Tink then sets off in search of the Lost Treasure of the title in a home-made "balloon". There are some great action sequences and some minor thrills, but nothing too scary. No big villains either, some comical trolls and some nasty looking red-eyed rats are about as scary as you get. The end sequence is a beautifully animated celebration that was just about the best eye-candy that I've seen in a "kiddie" movie, and certainly was enhanced by the big-screen presentation.

The voice acting is all very well performed, if not exceptional. As I previous said most of the major characters from the first film don't really have a lot of scenes in this one. Each of Tink's friends get one or two standout moments, and they all get costume re-designs reflecting the colder weather of Fall. Rosetta's new outfit was especially pleasing to me, as I loved her original outfit but was really surprised at how much I liked her new top. Have I spent too much time watching the first movie? Yes, I have. As I said, my 3-year old has just about worn out our DVD. I've seen the first movie easily over 100 times in the last year.

I would have to say that my biggest gripe is that the film, when blown up on the big-screen, made some of the characters look like little more than animate dolls. It's especially noticeable in two-shots with Tink and another character (usually Terrence). The animation and production design of this film is really top-notch, every outdoor sequence looked fantastic and was filled with detail that you will miss when it's translated to your home TV. The backgrounds are simply sumptous, and the fly-overs (of which there are many) are pure glamor-shots that don't disappoint. There's also a ton of homages and in-jokes to Peter Pan and the rest of the Disney ouevre. A feast for the eyes is not understatement here.

Sometimes when you go see a film at the El Cap sometimes there's even more extra perks. Today Rob Paulsen and Jeff Bennett the voices of Bobble & Clank, as well as the trolls, were doing a free signing at the Soda Fountain next door. Since Rob Paulsen is also better known as "Pinky" and "Yakko Warner" from Animaniacs/Pinky & The Brain it was a real treat for me to get his signature. I had hoped to bring our Animaniacs Season 1 DVD, but sadly forgot it. I did make my wife's Cell Phone ring, since her ring-tone is "I'm Cute" from the show. Rob sang along with us, and it was a magical moment. I've now met both Pinky and the Brain, as I met Maurice LeMarche aka The Brain, many years ago at a SDCC. 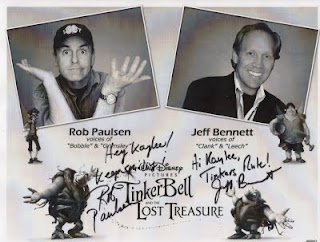 Not only that, but all kids in attendance got a nifty little Tinkerbell Coin Purse too. The service was fairly standard Disney quality, which when compared to most other major amusements is better than average. A spendid time was had by the entire Noetling clan.
Posted by William Noetling at 6:24 PM