A couple of months ago I found myself wandering around the massive new arts and craft store Michaels with my wife.  Perusing the artists' supplies I found several packets of blank trading cards, both canvas and thick card stock and best of all they were on clearance costing me about 50 cents per pack.  I dutifully bought several dollars worth and promptly forgot about them.

Cut to a couple months later and we bought a brand new Brother all-in-one Scanner/Printer, that has spectacular color printing.  After yet another clearance purchase of some thick card stock I had the brilliant idea of creating my own trading cards.

My first effort is this lovely piece of my family and I meeting Thor on the first day of the Treasures of Asgard experience at Disneyland.

My process was pretty simplistic, I grabbed a couple of pics off the internet because my own pics of the exhibit weren't that great.  I then laid everything out in Word, because I'm not a PaintShop expert.  Printed, glued and trimmed, it's a great effort, but nowhere near perfect.  Still I'm rather proud of my 1/1 card. 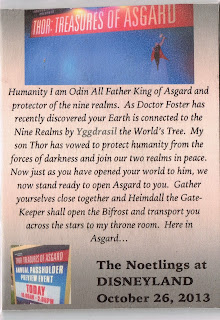 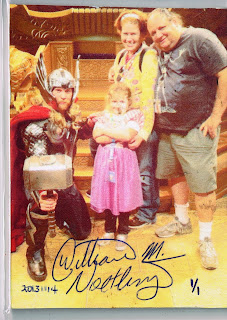 Recently I was gifted with a cut signature of the legendary insult comic Don Rickles.  I won't say how I obtained it, but my first impulse was to make my own cut-signature card featuring "Mr. Warmth" in one of my favorite roles, Crapgame from Kelly's Heroes.  Honestly if I could obtain them, I'd make cut sigs of all the stars of that movie, and there's a TON.  Clint Eastwood and Donald Sutherland are still alive and shouldn't be too hard to obtain.  Telly Savalas has been gone for almost two decades so his sigs are out there but they are getting expensive.  A quick perusal of eBay says I can get one from a certified check for about $90.  That seems a bit too pricey for me to simply cut it up and put it in a trading card that I'm never going to sell anyway.  Still it's a dream and you never know with dreams. 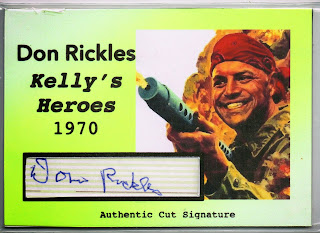 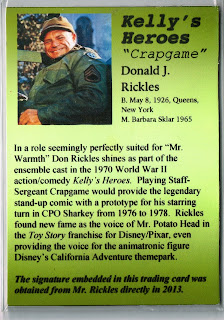 Now on the Thor card I simply transcribed the narration of the event itself (from my own video I might add).  For the back of the Kelly's Heroes card I wrote my own copy.  I'm especially happy with the pic on the front of the card which is straight from the theatrical poster.  I love the expression on Crapgame's face, and that gun, if you've watched the movie, is a point of contention for the Sarge.  Now I haven't met Mr. Rickles, but I sure would like to, just to say "Hi" and thank him for years of laughter.

I have no idea what my next card will be, I'd like to try a memorabilia card with a swatch of Jersey or fabric embedded.  I own a Los Angeles Kings practice worn jersey from the Gretzky era, but I have no idea who actually wore the jersey.  So while it would be fairly simple to cut a small swatch off the jersey without ruining it completely, I'd like to picture someone on the card that I knew wore the jersey.  However at this point it's impossible to prove the provenance of the piece, even when I purchased it from the Kings themselves (though the Art of the Game store at Staples Center) they didn't know who wore it either.

I also own a piece of fabric that came from the same bolt that was used for uniforms in Star Trek Nemesis but I'm not sure exactly where that fabric happens to reside at the moment.  I'm also thinking that a ticket stub card would be cool, though these days you don't always get physical tickets when you go to a sporting event.  Though oddly enough we have tickets for tonight's Kings v. Islanders tilt at Staples and we do have physical tickets, and since it's Girls Scouts night, and Larry Murphy Bobblehead night a card featuring one of our stubs from tonight's game would be really neat, especially with a cool pic from the game.  Hmm...

Posted by William Noetling at 12:28 PM