I will absolutely and totally admit to being a sucker for Nostalgia. In particular I absolutely adore the Mars Attacks property, originally a trading card set in 1962 illustrated primarily by Wally Wood and others. Most people only know it at a movie, but it's so much more than that. Topps tried an ill-fated comic book line in the mid-90s, Mars Attacks was one of their flagship titles. I think I MAY still have them in storage, at least I hope I do.

It's been 50 years since that original card set was released, and despite it being reprinted at least three other times, it's being done again, Heritage style, which means same printing process, same old cardboard, same old packaging with some new-age inserts and bonuses. Bonuses like sketch cards, printing plates and the requisite limited-edition parallels.

I've been collecting the set for awhile, piecing it together pack by pack at $2.09 plus tax (Target, thanks) for 6 cards has been tough, as Topps notorious penchant for cruddy distribution continues apace with it's lack of imagination when it comes to parallels.

I have purchased a total of 23 individual retail packs. I know this because I have exactly 23 New Universe and 23 Deleted Scenes Cards. I have pulled 6 Green Parallels and 1 silver. I've also pulled 2 lenticular cards. AND, the grand-poo-bah, a sketch which I just pulled today. Ready? Here it is: 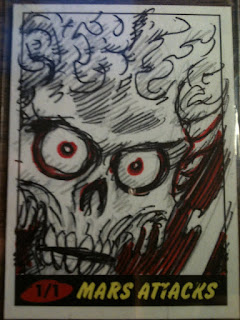 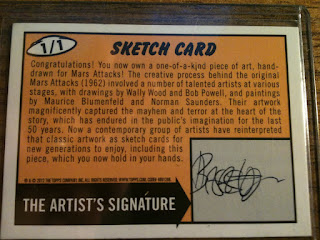 I DO believe that it's a Dan Brereton - which if it indeed is, would be a coup-and-a-half since he's one of my favorite comic artists. His series "Nocturnals" is monster-mayhem on a grand scale. I also adore his "Giantkiller" series from DC from a few years ago. Now I'm not 100% sure it's a Brereton, so I'm kind of posting here to see if anyone actually recognizes the signature.

As to my set collection, well the good news is I have a complete 10 card Deleted Scenes set.

I am totally willing to trade my parallels, but only for the Lenticular Cards or a Sketch if you want to part with yours.

Trade Rules: I live in So. Cal. I'm willing to trade to Canada, but that's about it for over-seas. Sorry UK. Unless you can supply all my needs. Then we'll talk.

We should ship at the same time.

If you're interested in trading, please send me email to wmnoe@yahoo.com.

Posted by William Noetling at 8:13 PM

I think that it's awesome that you're building this set pack by pack... the way I used to do it back in 80's.

I haven't busted any of this product, so unfortunately... I can't help you out. But I just wanted to wish you luck.

Hey folks, just FYI, I already made a deal to complete my set! So thanks but no more trading necessary.