Sorry for the delay, life got into the way.

Last time I left off I was going to look at a few more vintage cards that I got in the mail from Eric S who is sending off packages left and right. I saw a couple of other blog entries indicating they also got packages from him, so if you want a fantastic trade partner, drop me a comment with your email and I'll hook you up with him.

I showed off some of the more modern Angels he sent already, today I want to look at a few of the 20th century cards that I found to be the most interesting. Not that there weren't a TON of interesting cards in that 800 count box, but if I highlighted each and every one I'd be writing posts for WEEKS I tell ya. 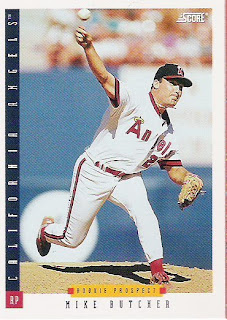 Here's a nice 1993 Score card of our current pitching coach Mike Butcher, who had a completely undistinguished career as a relief pitcher. It kind of makes me wonder how many coaches in the bigs had pretty much pedestrian MLB careers. Still, because pitching coaches don't typically get cards, this one is a bit more special to me and will go in my "current" Angels binder, rather than the "former" Angels binder. Yes, I have separate ones. 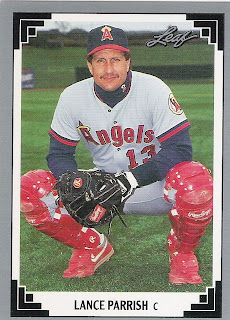 Lance Parrish looked like he might make it to the HOF at one point in his career, after all he played for 19 seasons, the first 10 for Detroit. Something happened though and his stock fell big time. Might have been the three plus years he spent with the Halos after they jettisoned Bob Boone. In any case, this isn't a spectacular card by any stretch, but it IS a 1992 Leaf card, which I thought had one of the nicest and cleanest designs out of all the sets in the 90's, and it was highly collectable at the time as well. 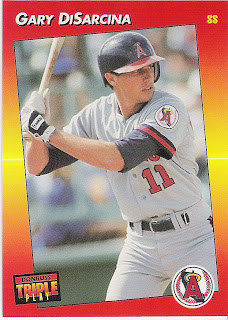 Nothing special here, a Donruss Triple Play card that most collectors wouldn't look at twice. Check out the back though: 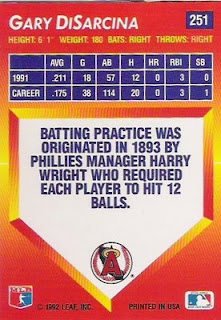 That has got to be the most trivial piece of information that I've seen in quite some time. I also want to know how they knew it was exactly 12 pitches. 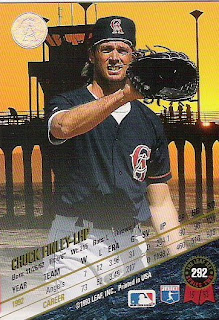 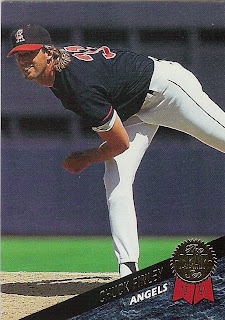 I bought a TON of 1993 Leaf, but not Baseball, nope, I bought a ton of Leaf HOCKEY in 1993 and beyond. I always liked the backgrounds on the flip-side, and this one is the epitome of what most people think about when they think about California. I mean, look at that sunset! Makes me want to drive to the beach right now. Alas, it's a bit chilly today, it's only 70 degrees and sunny outside...in November. 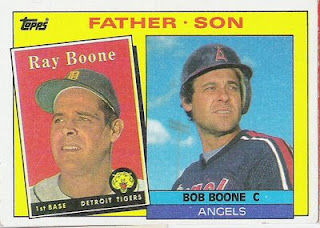 I love cards that link two or more players on the same card. I especially love them when the link isn't tenuous such as the "player of the year in 1960 and 2008". Here we have the Pater-familias of the Boone family, Grandfather Ray and Father Bob. I think there should be an updated subset of all the second and third generation ballplayers in the bigs today, Prince and Cecil on the same card? Heck yeah (it's probably the only time the two of them would be on the same page...heh) The two Tony Gwynns? Bring it on. It'd be even better as a relic issue. I can dream right? 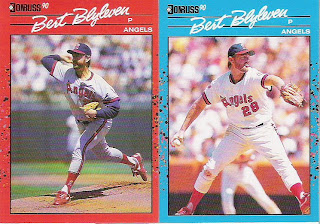 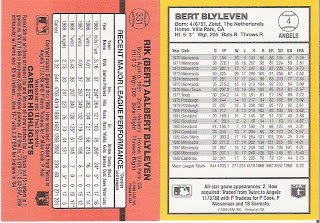 Now, HERE was a quandry, I had never actually seen any 1990 Donruss Blue borders, so I had to look them up. At first I thought this might be one of the fabled "Aqueos" Test issues, but the back didn't have the "Test Issue" stamp. A quick Google search turned out that these were from the "Baseball's Best" boxed set. I really like the blue border versus the red border, and the fact that the backs list entire career stats (I'm a sucker for that). Now I did more than my fair share of buying on 1990 Donruss, for whatever reason that I cannot remember 18 years later. Probably looking for that Juan Gonzalez Reverse Negative. If the standard set had been blue rather than red, I'd probably have bought more. 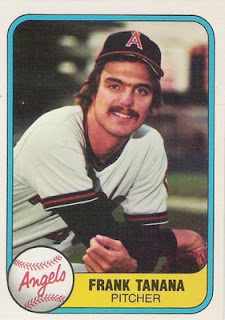 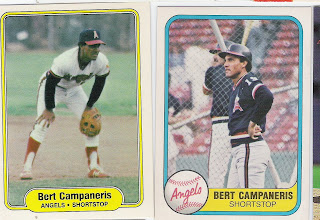 Which card do you think was produced first? These are both Fleer card from the early 80's, one from 80 and the other from 81, both of utility-man extraordinare Bert Campenaris. If you guessed the one on the left, you'd be wrong. That's actually his 81 card, the one on the right is from 80. I can't be the only one who ever noticed that Fleer's pics from 1981 were much, much worse than the ones from 1980. This scan is actually better than the card itself! Early 80's sets weren't without their own quirkiness were they? 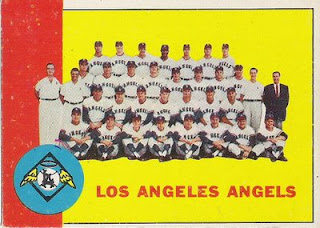 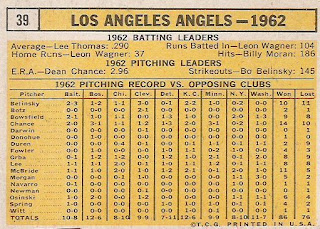 I saved the best for last, a 1963 Topps Los Angeles Angels Team Card. Just look at that beauty, they just don't make cards like this anymore. Oh wait, they kind of do, they just call them "Heritage".

Once again, big thanks to Eric S for the box of Halos, now I need to find about 100 more binder pages, and I have a LOT of sorting to do.

Posted by William Noetling at 9:08 AM

Hmmm... I'm gonna disagree on the Campaneriseseses. The one on the left is a 1982 Fleer; on the right is an '81. Fleer didn't actually get back into the mainstream baseball market until '81.

Yeah, you're right. I never actually had any '81 Fleer in all my years of collecting. Probably never had any 82 either. I was a Topps man during that time period.

Oh wait, kind of still am.