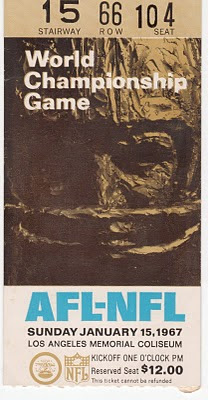 Hey there, I didn't want the week to go by without mentioning that once again I will be live-blogging the Superbowl...err..."Big Game" - NFL please don't sue me.

Can you believe that though, the NFL has trademarked Superbowl and will not allow you to use the name in conjunction with any event unless you pay them. So, for example, the party that 570 KLAC AM is holding during the game at Dave and Busters in Arcadia cannot be advertised as a Superbowl party. Silly isn't it?

In any case, yes, I own that Superbowl I - err...AFL/NFL Championship Game ticket from 1967. It was my Fathers' who left it to me. I also have a Rose Bowl ticket of his from 1963, not that I care mind you, since that was a USC victory year. I've never been to the big game, even though it was held in my home city twice in 1988 and 1998. In '98 I did go to the NFL Experience, which was a blast! I knew then that price-guide value was BS, when I couldn't even get Emmitt Smith's father to buy his own son's Classic Die-Cut Auto, which was booking at $500 according to Beckett.

I did have a buddy who went every year, the season that the Rams won I had him buy me a program from the site, which is really cool. Little known fact, that the Superbowl programs on site are different than the mass-market editions they sell everywhere. Thus they are more valuable. I have five or six programs from years past, including XXV (Giants v. Bills), which is really nice as it's a comprehensive history of the game. Of course I also have one from the year that the Chargers lost to the Niners. One of these days I'll do a nice blog entry on programs of all sort, but that will have to wait because they're all in storage.

For what it's worth, I'm rooting for the Packers, but I think the Steelers will win. I don't really care mind you, I'd rather not see Pittsburgh get a 7th Superbowl, but the Packers winning their 4th doesn't really thrill me much either. I guess I just want the old cliche' - a good game.
Posted by William Noetling at 4:35 PM