Everyone and their brother is blogging about Topps Series 2, I guess I should join in the fun, except that as the Budget collector, I'm still waiting for packs to show up for $2 at Target! Lucky for me there was a brand new Serenity/Firefly comic book that was published last week ("Float Out" written by Patton Oswalt) and I had JUST enough cash to buy one pack at $3.95. Fortunately I chose correctly out of the box which was only half full, check out what I pulled: 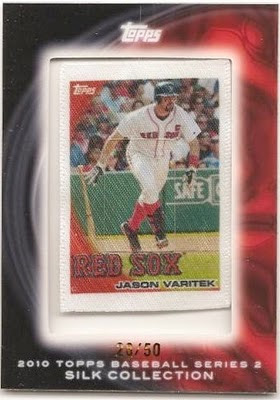 OK truth time, I didn't pull THIS one, this is a picture from eBay, my scanner isn't hooked up at the moment. Mine is #18 out of 50, and according to the pack it's a 1 in 431 pull, which is pretty damn good for me lately. Unfortunately there's too many on eBay right now to make anything off of it, so I'll hold it or trade it to someone for something Angels related. Then again I have a ton of trades to send out still, so trading with me right now isn't your best bet.

Still it's my first "silk" card, and it's really nice. I just wish it wasn't a Red Sox player. At least it wasn't Kevin Youklis.
Posted by William Noetling at 11:26 AM

That is one awesome card. I'm jealous, I'm a Red Sox collector and don't own a single Silk card. Any chance you would trade it for a big stack of Angels including a whole bunch of Vlads????

Adam, thanks for the offer, but in all fairness, I owe a bunch of people cards already, and I've got stacks and stacks of Angels still to go through. If I can't sell it on evilbay, I'll trade it for something similar once I've made good on all my outstanding trades.