Adventures in eBay - Part 2 in an Ongoing Saga

Today I realized that I've been buying and selling on eBay for almost nine years! Wow, somehow it seems longer, but the first feedback I ever received was in December of 1999, I remember I purchased the Pink Floyd: The Wall Movie Tie-In book that had eluded me since 1982. I had never even seen the thing for purchase at a used book store, and I checked EVERY SINGLE ONE I went to for well over a decade. Suddenly this eBay thing was my favorite site.

Over the years I've purchase much more than I've sold, but I've made some really, really good sales. Of course right now I have 45 items up for sale (down from 49 already, I sold 4 items between yesterday and today, and made about $20!), so get to bidding would ya?

One of the cool things about eBay is that you can go back and look at what you purchased, for the last 60 days (you can actually go back farther than the 60 days in My_ebay, you just have to look in your paypal account, if you use paypal for payments, which I do).

You should already know that I sold the Fukudome Japanese short print from Upper Deck Series 2 for $46.00, to a gent in Japan, so I had some dough in my account. What did I purchase? Well, not a whole lot actually, I spent quite a bit of that windfall on packs and toys at brick and mortar. Here's what I did buy on the bay in July: 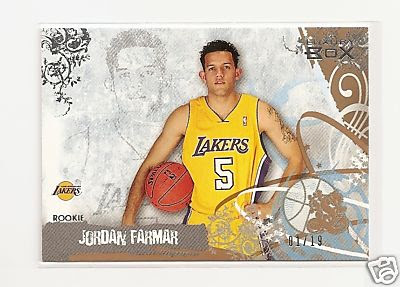 This one cost me a whopping $4.25 plus $3 for shipping. Normally I don't like paying that much for a single, but I love Jordan, and I didn't have that particular RC. Plus it's serial #ed 1/19, which I really liked. Yes, I know that makes me a Joe Collector but I don't care. I don't have any other cards with the first serial number. So there.

A bunch of UCLA Bruin Cards, including 3 Autos 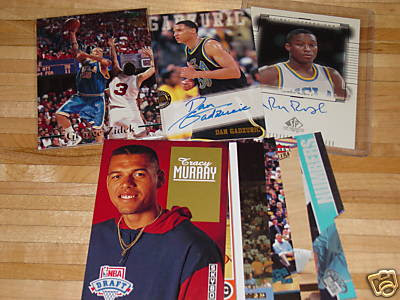 I can't say that I NEEDED most of these cards, though there were a few in the non-autos that I didn't have. I didn't have a single card of JaRon Rush, so getting an auto, out of an UD product, is pretty sweet. On the other side though, I already have several Gadzuric autos, and the Zidek auto makes the third different version of that card that I own now, two of them are autoed. I spent a whopping four bucks on this lot, including shipping. 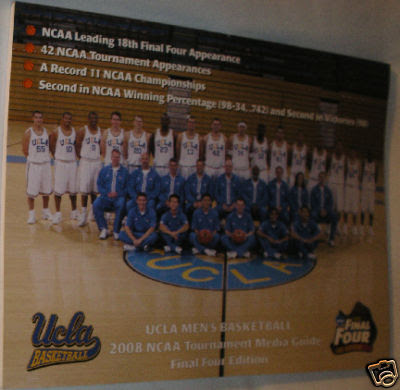 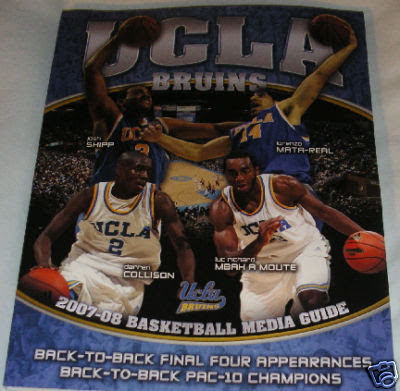 I love media guides, I have a dozen from the Los Angeles Kings, dating back as far as 87-88, though since I have at this point, basically given up on the Kings, I focus on the UCLA Bruins, my alma mater. This was a great lot that set me back less than THREE BUCKS! Considering the cover price of the guides at the student store is something like 20 bucks, I consider this a steal. I'd like to go back and fill in the holes in my collection, but since I only have about a half-dozen Bruin guides, that's going to take awhile.

Oh and I don't have ANY Angels Media Guides, so if someone out there has them and wants to trade, let me know. 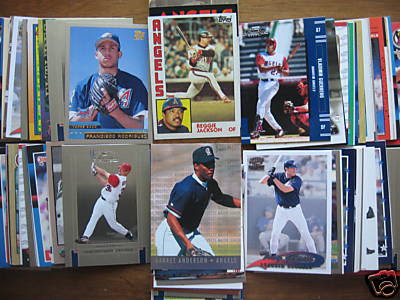 It wouldn't be a proper entry for me if I didn't mention the Angels SOMEWHERE. I got this lot of 200 cards for a PENNY plus $3.75 shipping. You have to be careful with large lots of the same team, not that the lots aren't worth the dough, usually they are, it's the shipping that can get outrageous. I've seen folks who try to make their money on the shipping and handling, rather than the price of the item, and it's just not right. In my estimation, $3.75 seemed a reasonable amount to ship a couple hundred cards. Of course, I've seen people try to charge twice or three times that for the same amount. Sad isn't it?

Posted by William Noetling at 4:22 PM