Secrets of the Empire: A VR Experience Review

Yesterday was my birthday and as a treat I decided that my daughter and I were going to try out the latest VR Game, "Star Wars Secrets of the Empire" which is located at The Void in the Glendale Galleria.  A couple of months ago I got my first real taste of what's going on in VR when I took Kaylee to a VR Art Exhibit in Pasadena, and while there were some of the same technologies featured at that event, this new VR Game is so cutting edge that we're entering "Ready Player One" territory.  We're not there QUITE yet, but it's getting very very close. 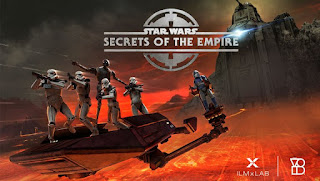 The experience starts when you go in and buy tickets.  You have to sign a waiver, and be sure to accept the part about video and achievement tracking, that way you'll get a score emailed to you later on.

After being checked in by the staff you get suited up.  First you step into a haptic vest that's hanging on the wall, there's a reason for that.  After getting all strapped in and snug (and they have adapters for bigger folks) you put on your headset. Now this is no mere retail level headset, it's fully immersive and much more powerful than the previous headsets I've tried.

Next you're ushered into the briefing room where Cassian Andor from Rogue One gives you a mission to break into the Imperial Facility on Mustafar (you know where Vader lives) disguised as Stormtroopers and steal back a precious Jedi artifact.  You're accompanied by the droid K2S0 and a pilot.  You get into a shuttle and you're whisked away to your destination.  I'll be damned if I didn't feel like I was really flying in space INSIDE of Star Wars, it's that immersive.

Upon landing you exit the vehicle and you're freaking on Mustafar.  There's heat, there's smells, there's wind, and as you cross a platform that's over a huge bed of lava, you actually feel everything.  I got a touch of vertigo at one point, and my legs weren't steady because it all felt real.  There's several moments like that in the game and well, you just kind of have to experience it to fully understand. 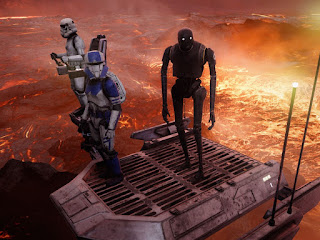 You infiltrate the facility, grabs some guns and as soon as you do alarms go off and you're immediately attacked by legions of Imperial Stormtroopers who you have to fight off.  You can get hit by lasers and you feel it, but you can't really die and there's no real adverse affects other than it throws you off for a second or two, so let yourself get hit, it's fun!  Now I don't know about you, but growing up all I ever really wanted to do was run around the Death Star blasting Stormtroopers ala Han Solo.  Well, here you really get that opportunity.  Also they can take a few hits before they're down, so aim for the head.  Just like modern FPS games, headshots rule.

I won't spoil the rest of the game, suffice to say you shoot a bunch of troopers and some lava creatures, have to solve a simple puzzle (or not, the game continues even if you're a doofus like us and can't solve the puzzle) and are confronted by the Dark Lord of the Sith himself.  I'd say the only negative is that you don't ever get to wield a Lightsaber, but hey I guess that they have to save something for the sequel game.

Apparently this game is canon too, or at least the story is.  The relic that you are searching for should show up again in some ancillary media or other. 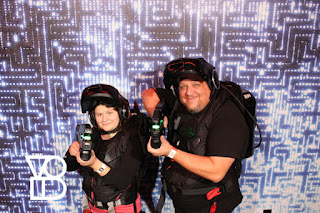 After successfully completing your mission you take a picture and doff your gear.  The picture was overpriced as these things tend to be, but given they don't let you take any photos in the facility itself, it's a nice keepsake.  The next day you're sent your score.  I had a higher percentage accuracy than my kiddo, but she killed more Stormtroopers than I did. 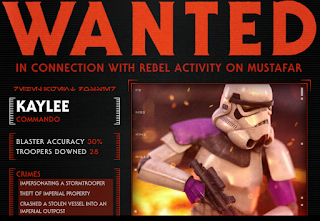 Here's some things to know:

1) On very busy weekends I'd buy tickets ahead of time.  They also don't necessarily run the Star Wars game every day, so check ahead.  The other game is an original property, and while it looks fun, it ain't Star Wars.

2) While they don't want you running or jumping around, the game is quite active.  You do walk from one room to another, and the complex feels very large.  We both worked up quite a sweat killing bucketheads.

3) It's totally immersive, in that there are lighting, wind, atmosphere and aroma effects.  When you look down at lava you feel like you could fall right in, it's pretty darn cool.

4) There's some glitchiness which I suppose is to be expected.  It's not 100% smooth, there's some parts where you can't see your hands, etc.  But it's real enough.  There are also real world props that are interactive.  If you take off your visor you can see them.  For example, K2S0 when he appears close to you is a maquette and you can touch him.

5) The haptic suit and helmet are quite heavy, so just be prepared.  They're not uncomfortable, but if you're not ready for them it can take some getting used to.

6) It will seem a lot shorter than you want it to be.  You're going to want to do it again almost immediately.  I don't see it as having a LOT of replay value, but twice or three times should still be fun. 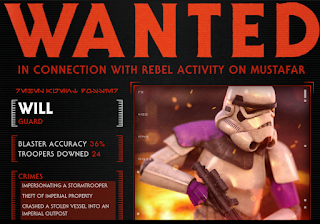 Posted by William Noetling at 11:26 AM

Sounds way more fun than the VR "empathy" training we did at my store.