Whenever the 'real world' invades my fiction wrestling universe it's usually because something bad has happened. Tonight Joseph Anoi'a who is better known to the world as WWE's Roman Reigns announced that he has to relinquish the WWE Universal Championship because his Leukemia has returned. While on the surface this might appear to be part of the storyline or "a work" as it's known in the industry, it's pretty clear that it's not a work. Anoi'a comes from a very long and proud lineage of Samoa wrestlers, his father was Sika, of the Wild Samoans, he's cousins with virtually every wrestler of Samoan descent in the industry, and he is, from all reports, one of the good guys. His CHARACTER of Roman Reigns is not universally loved by wrestling fans who have tired of him main eventing not one, not two, not three but FOUR Wrestlemanias in a row. Up until tonight the perception had been that Vince McMahon and the WWE Braintrust had been "shoving Roman down our throats" for the last several years despite the fact that a vocal segment of the fanbase can't stand him.
He seems like a pretty private guy behind the scenes, there aren't that many out of character interviews with him, he's not pictured with his family much, and he seems to put it all out there as the character not the man. Perhaps maybe Vince et al knew his time was limited so they pushed him as much as they could to get what they could while he still had time. Maybe not. Who knows.
In any case, I'm sad. I'm sad because while I'm not a huge fan of the character, I didn't mind his title victories and actually got to see him perform live the night before Money in the Bank 2016, which was a cool event where all three of the members of his faction, The Shield, held the WWE Heavyweight Title - Roman entered as the title holder, lost the strap to Seth Rollins in the main event, who then lost it to Dean Ambrose who won Money in the Bank (the winner gets a guaranteed contract shot whenever they desire) earlier in the night.
Watching those three men embrace at the end of Roman's speech tonight brought tears to my eyes. Yes, wrestling is scripted, but that doesn't mean it's not real. 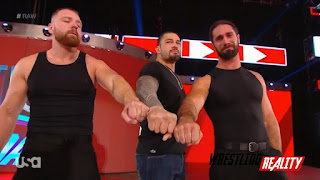 Look at Seth Rollins' face, that's not acting there. Dean Ambrose on the left is BARELY holding it together. These guys are brothers in the ring, and they left it all out there tonight. If that doesn't get you, you have no heart.

Posted by William Noetling at 5:56 PM

Sorry to hear this news. I don't really follow wrestling anymore, but Leukemia is scary. My buddy just had his bone marrow examined to figure out why his white blood cell count is so low. Leukemia is one of the things that could be causing this.