While I'm still in the afterglow of the UCLA victory over Tennessee last night, currently I'm in a funk when it comes to budget collecting. Sure, there's plenty of outlets where you can buy fresh, new product for current prices, but there just aren't as many "discount" card packs lately. Or at least there don't seem to me to be very many.

This last weekend we went camping up in Ojai at Wheeler Gorge Campgrounds, a very nice place that has a cool stream running through it. (If you'd like to see pics, go to my Flikr account at www.flikr.com/wildwill). On the way up we stopped at Subway to get lunch, and as I did last month when we camped there, I ran into Blockbuster to see if they had any Fairfield repacks. They did, only this time the only Baseball they had was 2007 Upper Deck. For $4.99 I got two packs of Series 1 and two packs of Series 2 and a "bonus" pack of 2007 Topps Series 1. Here's the thing, all together, five packs of cards - 32 in total, and I pulled bupkis. Well, not really bupkis, I did get two Angels (GA and Darren Oliver), but I think I had them both.

Then today I make my weekly visit to Target and notice that they've bulked up on Excel $1.59 el-cheapos. These are great for me, since I spent most of the last two decades ignoring Baseball cards completely. I got a pack of 06 Upper Deck Update (Holy crap, they have cards numbering in the 1,000s!) and a pack of last year's Topps Chrome. In the Chrome I pulled a Schilling X-Factor, which isn't bad, but the Upper Deck pack had nothing good in it, unless you like 90's era full bleed cards with Skybox like graphics. Well, I take that back, of the 8 cards, 7 of them had the dreaded "rookie card" logo. But since they're '06 cards, and I've yet to hear of any of them, I'd say they were busts.

I did also pick up a pack of this year's Upper Deck First Update, why I have no idea. Well, it's only a buck a pack, so that must be why. So far I've bought 4 packs of that product, and I'm sure I'll buy a few more, but I'm really only looking for Angels, so most of the cards are useless to me, except for trade bait.

Here's the real rip-off though. I bought a pack of Bowman Chrome Retail - for three bucks, with a whopping THREE cards in it. Now I could have SWORN that I already bought a pack of this stuff and it had four cards in it. Now, it's still cheaper than Hobby, which is about five bucks a pack for four cards, but if they can do Topps Chrome with the SAME number of cards in both Retail and Hobby, why can't they do the same for Bowman Chrome?

I did get a prospect, Zhenwang Zhang who is the first player from China to be signed by a major league team (The Yankees of course). The other two cards: Alex Rios and Derek Lowe, oh joy. Was this pack even worth three bucks? No way, no how, and it will be the LAST pack of Bowman Chrome that I buy. I'd rather buy Topps Chrome, at least I get four cards there, and I have a chance to pull something NICE, rather than crap. Another nasty thing I just noticed, the Autographed Prospect cards are numbered as an extension of the prospects set (which began in regular Bowman if you remember). That's going to piss off a lot of set collectors. 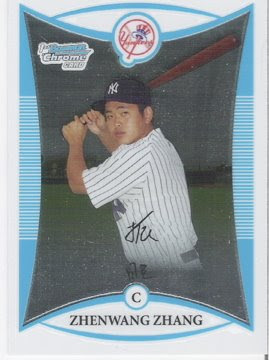 I was going to update my team trading, but I think I'll let that sit until tomorrow or the next day.
Posted by William Noetling at 11:05 AM

I think the Bowman Refractors look a million times better than the Topps Refractors but that's it.

You hit the nail on the head. Bowman Chrome is a frustratingly expensive product...

I'll buy the singles I want rather than the packs...

I think the only reason that I've picked up ANY Bowman at all this season is that the retailers that I usually buy packs from (Target, K-Mart, etc.) were out of other stuff I would have normally bought.

Singles definitely seem to be the way to go for that product, it's not like anyone in their right mind would bother putting together a set of that stuff.

How hard would that be anyway, the set is packed out over three different products.