Instead of a Monday Night Football double header featuring two games that I really didn't care about one iota, I watched the Angels/Yankees tilt in Anaheim last night. Yes, I know, something is wrong with me, but the fact that I watched football all day Sunday kind of mitigates my strangeness. See, I can get away with a single baseball game every night, but I cannot get away with two straight days of nothing but football (and that's not even counting college). Even though the Packers/Vikings game looked pretty good I was having more fun watching the Halos pound the living snot out of the Yankees, because ANY TIME the Angels beat the Yankees it's a good thing.

Starting pitcher Jon Garland spotted the Bronx Bombers a run in the first inning when Johnny Damon scored on an A-Rod single, fortunately they left the bases loaded and that would be all the scoring the hated ones would get. The Angels meanwhile got four homers; one from Vladdy, one from Sean Rodriguez and a career game from Brandon Wood who hit two. There was also a benches clearing mini-fight when Pudge and Torii Hunter got into it in the longest sixth inning I've seen awhile. Being the PC 21st Century, both men apologized later and kissed and made up. Personally I would have liked to have seen a bigger fight, but maybe that's because I've watched too much hockey over the years.

In the seventh a new Angel pitcher took over for Garland, making his major league debut at age 24, Kevin Jepsen faced Derek Jeter, Bobby Abreu and A-Rod in that order, and got two of them to ground out, A-Rod flying out. Heck of a first inning for the late-season call-up from Salt Lake City on Saturday. Jepsen has actually had a great season all things considered. Just a couple years removed from a season ending shoulder surgery, Jepsen was on the U.S. Olympic team in Beijing winning a Bronze medal for his efforts.

Jepsen was drafted in the second round (#53 overall) in 2002 by the Halos and is an Anaheim native. He's 6'3" tall and is listed at 215 lbs and attended High School in Reno. In the official Press Release from the team, manager Mike Sciosa is quoted as saying: "He's a kid who came into the organization, really threw hard, had a setback with his shoulder and came back..." His fastball is in the mid-90's and he showed absolutely no sense of unease in throwing to two sure-fire first-ballot HOFers in his MLB debut.


Checking his cards, we find that he's got the obligatory Bowman Prospects (2002 Bowman and Bowman Chrome) and a 2002 Upper Deck Prospect, and nothing since. Topps in their infinite wisdom will probably slap that Rookie Card logo on his next issue, since he's now actually PLAYED in a major league game, even though his first MLB cards are now six years old. There's also a Just Stars Minor League card from '02, and a couple of minor league issues as well. I can't tell if there are any certified autos out there, there might be a Just-Stars one, but I'm just not too sure. 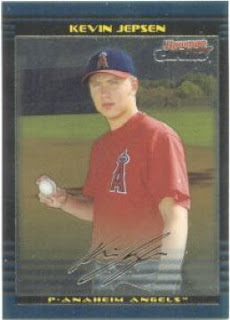 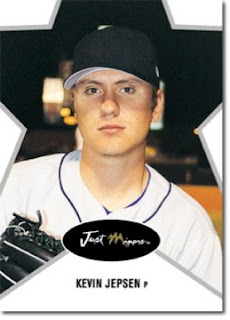 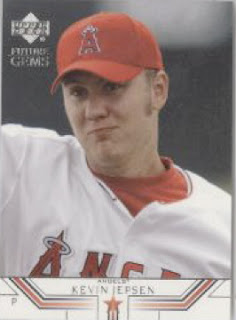 There are a couple of listing on eBay now for his singles, but if he has another performance like last night, you might expect his rookies to go up in price pretty quickly. Then again, maybe not, you never know. Personally I'm just hoping that he can become a good middle reliever as an option to the spotty Scott Shields and Jose Arredondo, since one of those two may have to move to the closer position next season if K-Rod flies the coop.
Posted by William Noetling at 1:32 PM