I'll admit it, I can't keep a schedule at all. Not only that, but I'm jumping around all over the place with this series, much like the show and the Doctor himself. So I think it's entirely appropriate that because I'm not watching these shows in any sort of order, that I review them in no particular order either. Being that there won't be any NEW episodes of Doctor Who for a few more months, I'll continue to explore all of his previous incarnations, at least until I'm familiar with all of his different regenerations. To that end, a couple of months ago I looked into the 5th Doctor played by Peter Davison.

I actually remember the kerfuffle that happened when Tom Baker decided to leave the series, and was replaced by the MUCH younger (by almost two decades) Davison who had made a name for himself starring in the BBC adaptation of "All Creatures Great and Small." At just under 30 years old he would be the youngest actor taking the role until our most recent Doctor Matt Smith. The blatant appeal to younger viewers worked, especially in relation to his companions who would be much more involved in the serials than the previous incarnations allowed.

"Castrovalva" starts with the end of "Logopolis" with the 4th Doctor falling from a radio tower and regenerating into his new identity, assisted by a third party named "The Watcher" who somehow realized that the 4th's time was up. This "Watcher" turned out to be "a manifestation" of the Doctor himself and merged with him upon regeneration. Very wibbly wobbly if you ask me. In any case, the regeneration doesn't go well, and the Doctor is in danger of dying, so his latest companions, Adric, Tegan and Nyssa get him to the TARDIS, where they stick him in the "Zero Room" in order to ensure his health. Meantime they try to figure out how to pilot the TARDIS. Adric, a genius level teenager from "E-Space" is obnoxious and annoying, but helpful in that his mathematical mind is able to get the TARDIS to dematerialize and onto a flight path. Tegan is a flight attendant that showed up in the previous episode simply wandering into the TARDIS thinking it was a real police box, and as such is the frightened "newbie" and not really very useful at all. At least she's pretty. Nyssa is some sort of galactic genius princess and together they all manage to help the Doctor out of his funk. 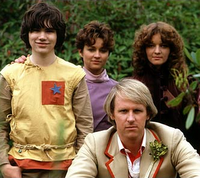 TARDIS Crew - Circa Castrovalva. From Left - Adric, Tegan, The Doctor and Nyssa


After the hallmarks of a regeneration are played out (i.e. the changing of the clothes, which includes several scenes where Tom Baker's signature scarf is unravelled) our heroes discover that Adric is being controlled by the Doctor's greatest nemesis, the rogue Time Lord The Master, and that he wants to destroy the Doctor once and for all. Adric steers the ship to Castrovalva, a peaceful austere planet where the Doctor can rest and relax and let the regeneration take it's course, since he's STILL not stable even after being in the Zero Room. Along the way they get caught in a trap by The Master and are forced to "delete" several of the rooms in the TARDIS (including the Zero Room, oops) in order to escape. Once on the planet they create a "Zero Cabinet" which Nyssa and Tegan carry around the surface on the way to the actual city Castrovalva. Meanwhile Adric has disappeared, or more accurately, he was captured at the beginning of the story and his appearances in the TARDIS since were holographic projections, or some such. 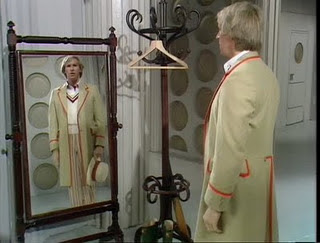 The new doc checks out his new appearance


Once in the City the citizens all help out our heroes, but all is not what it seems. Eventually the Doctor recovers and realizes the entire place is a trap and doesn't really exist, that it was created by Adric through The Master to ensnare the samaritan Doctor and yes, kill him. Obviously they foil his plan and they escape trapping The Master inside the city as it collapses, never to be seen again (until his next appearance anyway, the guy dies more times than The Joker).

So to sum up, the Doctor regenerates, there are problems, he tries to take a vacation, gets caught in a trap and cleverly escapes and all is well. Pretty standard stuff actually, and while this is "classic" Who, it's not really a classic story. Sure Anthony Ainley plays the Master to perfection, and Nyssa and Tegan are absolutely gorgeous to look at, but the whiney Adric really brings the whole narrative down. The guest starring Castrovalvans are quite well done though, BBC Shakespearean actors usually bring an air of classiness to the proceedings, even if the effects are definitely low budget. There's a charm to the classic stories though that shines through all of the general silliness and padding that the old multi-part serials had built in. We get to see more of the TARDIS interior in this episode than I've ever seen before, including new rooms and corridors.

Collectibles from the 80's era Doctor Who are abundant, and new figures are being made by Character Options still. In the 5" Action Figure line we have seen the release of the Doctor just after he regenerates (i.e. in Tom Baker's clothes), and of course there are multiple iterations of the 5th Doctor in his standard Cricket outfit, with and without the celery stalk on the lapel and hat. There's even a 5" Zero Cabinet toy, but I'm not sure if this is a custom or an official CO toy. I tend to think it's a custom since there doesn't appear to be an official release. You can also download a printable version, though I can't find it at the moment. There are not figures yet of the Doctor's companions, though if you want miniatures, trading cards or autographs, they exist. Castrovalva itself is also featured on a couple of trading cards. The story was adapted into a Target Novel and is still readily available, DVDs and VHS tapes also exist and are easy to find. 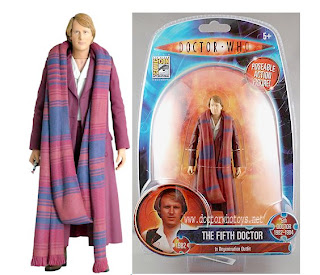 The Regeneration Doctor, one of several variations 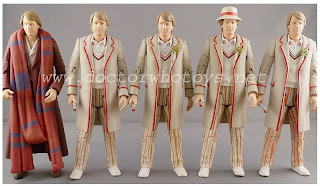 Five of the variations of Five 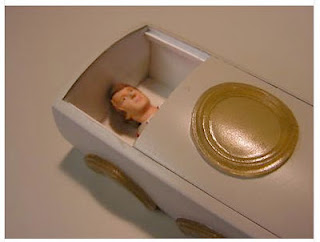 Next Time on Doctor Who: "Four to Doomsday" - Next Review - either that or "The War Games".


Previous Entries in the "Doctor Who Review" Series:

Posted by William Noetling at 10:17 AM