After getting the Character Building Mini Tardis set in the mail I suddenly had a deep-seeded need to get more Lego and Lego-style mini-figures, so when I saw that Target had a sale on the Transformers Kre-O line of building sets I finally pulled the trigger on one of the small sets - Jazz. I chose him over the similarly priced Mirage because, well I dunno, I liked the colors on Jazz better. I guess I like the character better too, after all his original G1 incarnation was voiced by the legendary Scatman Crothers.

It is interesting to note that this is not the first time that Hasbro has attempted to do building brick versions of Transformers toys, in the early 2000's they came out with a line called "Built-to-Rule" which actually had better transformations between modes. This set, like all the Kre-O sets cannot actually be transformed, you have to take apart the models and put them back together. And then you'll have some parts left over. For the car mode you can practically put a Jazz torso together with the left-over pieces. The robot mode omits the fenders amongst other pieces.

I like these boxes, they could be a bit more sturdy, but they are nicely colorful and have all the information that you need to make an informed purchase. They don't lie on the box either, you know right up front that you have your choice of modes and that the product doesn't convert. The side panels are cool as well, one side shows you the actual size of the enclosed "Kreon" figures (the main selling point for me) and the other looks like it could go on a book shelf as part of a collection. There's a gold foil hologram sticker on the front which tells you that this isn't a bootleg toy.

I didn't find anything especially exciting about the instruction booklet, other than it's rather thick. Then again it has to be because it has two different modes to help us build. There's the obligatory parts list, and a couple of pictures of other bots available in the line. I would prefer an actual line-wide catalog I suppose, and honestly the instructions are at times rather obtuse.

In each mode there are pluses and minuses in the construction. Let's start with the vehicle mode since that's what the instructions start with. Originally Jazz alternate mode was a Porsche 935 turbo, here his alt-mode is some sort of boxy car that vaguely has a sports car shape. It's certainly NOT a Porsche. Because of the dual nature of the kit there's an awful lot of parts that in a Lego kit wouldn't really be used. However, it's because of this extraneous piece use that the car itself once finished is a hefty little toy. The real rubber tires roll freely and there's space inside for the driver Kreon figure to sit, he can ever get in the vehicle via the doors or the roof which both open. Articulated "mirrors" on the side are a nice touch, but they'd be better if they articulated from side to side rather than up and down. Also the doors have sort of a "roll cage" effect with a long studded piece on top of the door, making it look rather silly when the doors are actually open.

I definitely like the lines of the front and rear though, and the "Jazz" license plate is a nice touch. The automobile version of this toy is totally the best feature so far. 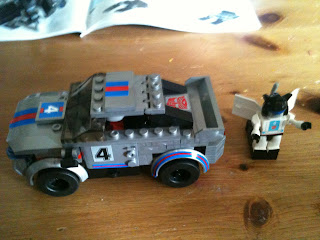 Once you finish the car mode, you might be tempted to make the robot once. Go ahead and do it, but once you're finished you're going to want to put him right back into a car. Why? Frankly the robot mode stinks. Oh sure, it has a great head, but that's only because the head is a completely separate piece unused by the car mode. It's also made out of a more pliable rubber substance, which provides for better detail and it has two pretty decent paint ops in the eyes and the face.

In fact, the entire torso of the bot isn't bad at all, and the arm articulation is fairly good as well. So why does the figure fail in so many ways? The legs and the hands. Well, more specifically the lack of knee articulation in the legs and the lack of actual hands make this thing look like more of an after-thought rather than an actual toyetic design. It looks to me like the larger kits have better articulation than the smaller kits and also have better designs, so I'll chalk this one up to the size of the kit itself.

I would be remiss if I didn't mention the blocks themselves, which STRONGLY resemble the patented LEGO brand, with the exception of a single "dimple" on one of the studs of practically every piece, which while you think might be useful for plugging in the included weapon for the Jazz Kreon, really isn't at all. It reminds me of the original 12" GI Joe's backwards thumbnail and his facial scar, i.e. details included only for legal purposes. The plastic used is nowhere near the quality of LEGO either, while the Character Building set's are really close, Hasbro's attempt isn't much better than their earlier BTR sets. Also the gray pieces tend to show stress lines or other imperfections that are never shown on LEGO pieces. They do fit together nicely though, but I wonder how they will deteriorate over time compared to Lego (though I notice on some of my more recent LEGO kits their plastic isn't always the best).


I don't like stickers, I don't know of too many LEGO fans who do. The stickers included in this kit are flimsy and hard to put on the toy (well difficult for me with my fat fingers). One of the rear fender stickers even ripped on me as I was pulling it off the sheet. I know it's too expensive at this price point for tampo, but come on Hasbro, step it up! 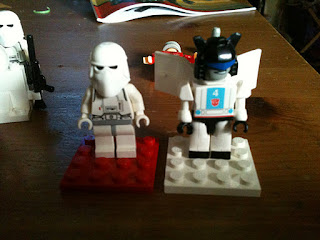 For me the selling point of these toys are the included "Kreon" figures. The little versions of the Autobots and Decepticons are adorably cute and on models for the G1 counterparts. Jazz comes with removable helmet, blaster and wings, while the oddly colored generic human "driver" figure has a ball cap and helmet. While the "kreon" figure works well for the robots, it utterly fails for the humans. The heads are not rounded all the way around, which is fine for a robot, but looks WEIRD on a human. Plus the arms are all the same with huge shoulder pads and forearms, which again work well for robots but look odd for humans. Still it's nice to have two figures on a kit this size, and you can always put your driver into the car and forget about him.

Articulation on these guys is even one step better than the Character Building figures as well, since Kreons actually have ball jointed hips that work well. They also have the waist twist, along with ball jointed shoulders, swivel head and cut wrists. The ONLY drawback on the Jazz figure is that his wings (i.e. the 'doors' from his car mode) are really wide and make him look a bit silly (and also don't let him in the Tardis.)

I got this kit for just under $10 at Target, which is a great price for 177 pieces and two mini-figs. Considering that similarly sized LEGO kits are between $20 and $30 at retail, that's not bad at all.

Despite the somewhat mediocre overall score (which I average out from the individual scores) I really like this kit, and I'll actually be looking to purchase at least one of the larger kits at some point. Hasbro really needs to take a page from Mega Blocks and Lego and sell the Kreons in blind bags, which if they did they would sell a buttload.


Wow, two posts in two days, I'm on a roll! I even have another post up my sleeve for either later today or tomorrow (saw my first packs of Topps 2011 Baseball Update yesterday, so I have to post on them). Also I have decided to CONTINUE yesterday's comic strip and have constructed a couple of new figures for the ongoing saga
Posted by William Noetling at 10:58 AM